This week Mr Steve and I set off on another one of our walks to explore an interesting historic part of the country and this time we decided to walk around two medieval battlefields, an English Civil War battlefield explore a marcher castle and walk along one of the significant border monuments in the UK, namely Offa's Dyke between England and Wales.

Our previous two walks can be followed in the links below:

King Offa was a Saxon king who ruled Mercia from 757 to 796 AD, that is the midlands area of the modern UK with his territory sat squarely between the other two major Saxon kingdoms of Wessex in the south and Northumbria in the north and with his western border aligned with modern day Wales which at the time of Offa was split up into the separate Welsh kingdoms of Dyfed, Gwent, Powys and Gwynedd.

Much debated about, but possibly constructed as a border demarcation line rather than a serious defensive barrier, the earthen bank and ditch was accredited to Offa by the monk Asser in his history of Alfred the Great and thus it has generally been accepted as his work; despite other theories about it being a late Roman construction, during Emperor Severus' time, which has generally been discounted and some carbon dating that has suggested that parts of the dyke were constructed before Offa's time, suggesting a longer term project, perhaps, of previous Mercian kings.


One generally accepted fact is that Offa was a powerful ruler for his time, able to command a significant labour force to construct such an earthwork and the ability to organise such a mammoth project.

The Offa's Dyke trail offers walkers the opportunity to follow this amazing monument the length of the English-Welsh border and I have to admit that Steve and I thought long and hard about whether to forgo such an opportunity before submitting to reality, that our knackered old frames would barely stand up to the five or so miles we selected to do as seen below in the View Ranger App map we took to make sure we didn't get lost along the way - and that nearly happened! 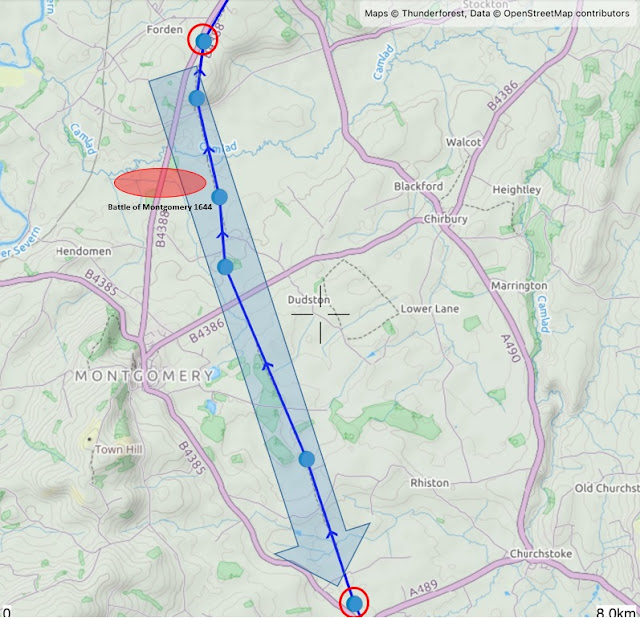 Another important aspect in our planning was to select a part of the trail that would give a good impression of what can be seen of Offas Dyke today as parts of it have been destroyed over the intervening centuries.

The final piece in the planning process was to find an area that also encompassed other interesting historic sites to include into our two days as well as being able to enjoy some glorious scenery.


As you will see from these initial pictures taken just after we started to walk, this part of the dyke is not that impressive and sometimes barely noticeable from the surrounding rolling fields.

So much so that after about fifteen minutes into the walk and not having really seen much of the famous embankment we decided to stop and lunch on a piece of raised ground to escape the worst of some early morning rain lying on the surrounding grass, only to discover that the raised bit of ground selected was in fact part of a sequence that immediately became recognisable as our elusive dyke.

It is recorded that Henry III was first advised to build the castle at Montgomery on the 30th September 1223 when the young king, only sixteen, had returned from a skirmish with Llewlyn ab lorwerth, King of Gwynned and eventually of all of Wales.

Concerned with the need to strengthen his defences along the border, this position was identified by his senior adviser Hubert de Burgh as a perfect spot to build upon with steep cliffs on three sides and a dominant position overlooking the neighbouring lands, and indeed the king appointed de Burgh Lord of Montgomery Castle in 1227.

The original look and layout of the castle is captured well in the illustration showing an inner and outer ward, with the only practical approach for an attacker guarded by each enclosure having a twin towered covered gate fronted by a narrow bridge across an intervening deep ditch.

The original construction was in wood but eventually replaced with stone over time starting with the inner ward atop its rocky pinnacle and working outward. 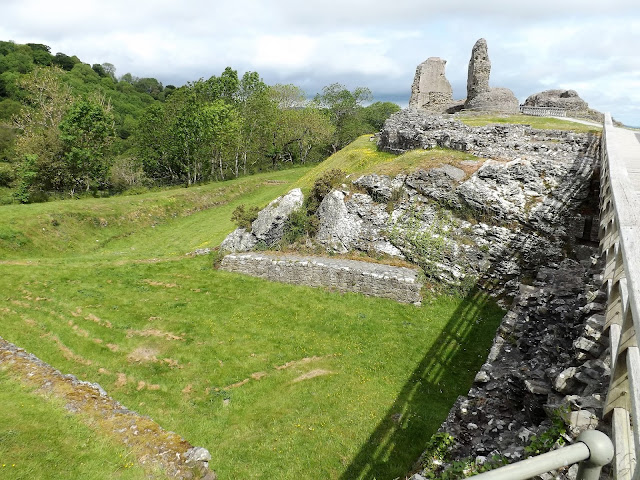 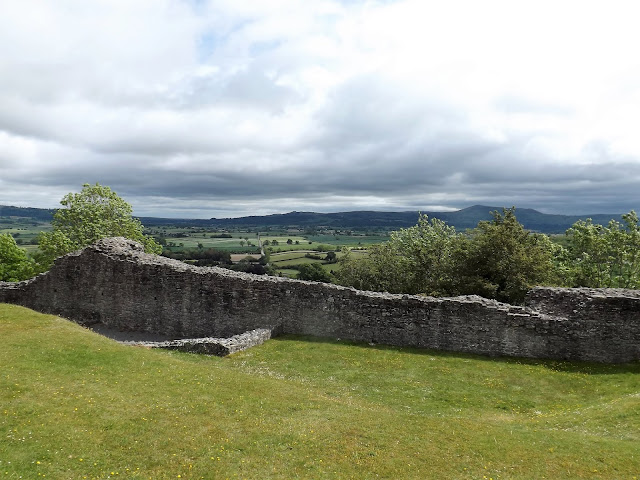 As mentioned in the illustration below, the inner ward was the final holding point should the outer works fall to an attack and to ensure the garrison had a chance to hold out for as long as possible to await relief it was essential that they had a secure supply of drinking water. 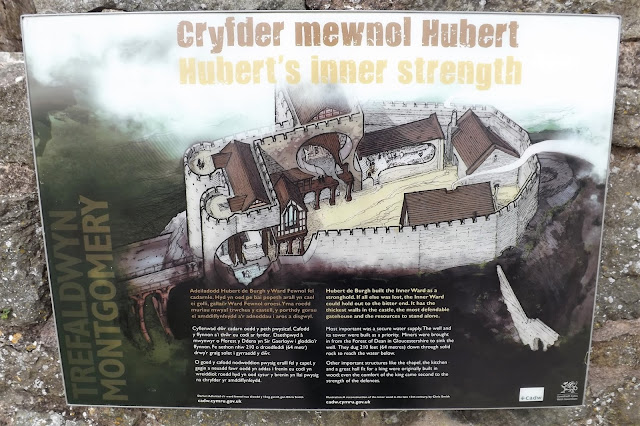 The hatch below covers the well shaft that sinks two-hundred and ten feet through solid rock and was dug by miners brought in from the Forest of Dean in Gloucestershire specifically for the task. 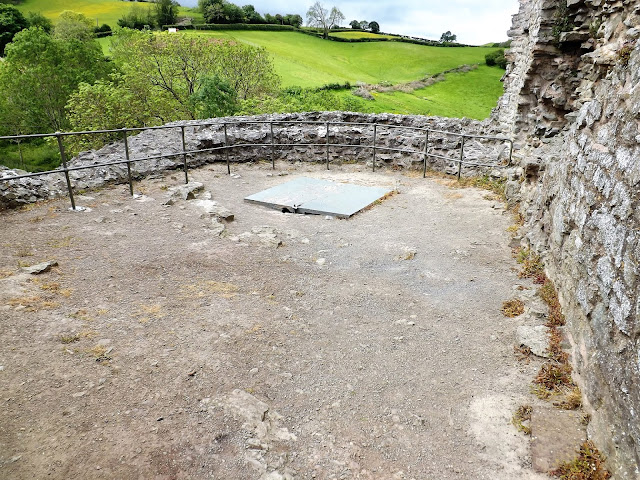 The impressive views from the inner ward gave us a chance to overlook the English Civil War battlefield of Montgomery fought on the 18th September 1644 .

Parliamentary forces were in the ascendancy in 1644, following the disastrous Battle of Marston Moor, which I posted about in 2017 for a visit I made to the battlefield in the 373rd anniversary.

Following this Royalist defeat Parliamentary commanders were looking to break the Royalist hold on North Wales with a major incursion made by a Parliamentary force under Sir Thomas Myddleton capturing the town and castle of Montgomery in early September 1644.

Within a week the Parliamentary garrison under a Colonel Mytton was itself under siege from a Royalist force, eventually brought to around 4,000 men under Sir John, Lord Byron, having marched south from the Royalist held city of Chester, also covered here on JJ's.


As can be seen in the map below, Offa's Dyke passes close by the left flank of the Parliamentary line along which we walked and viewed the ground over which the fighting occurred and pictured above looking at Offa's Dyke.


The battle that ensued is poorly documented, but it seems that Lord Byron, after gathering the bulk of his army on to the forward slopes overnight beside the castle, whilst leaving a covering force in the trenches to watch the garrison, observed the next day, a large proportion of the Parliamentary cavalry leave the enemy army apparently to forage for supplies for the castle garrison.

Taking advantage of this move, Byron's army swept down towards the Parliamentary forces gaining an initial success and overwhelming the remaining enemy cavalry and threatening to turn their right flank cutting them off from the Salt Bridge over the River Camlad. 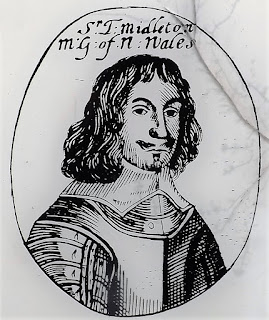 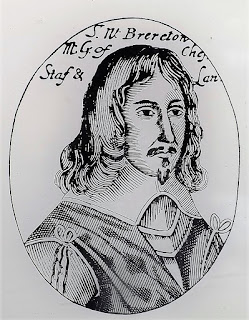 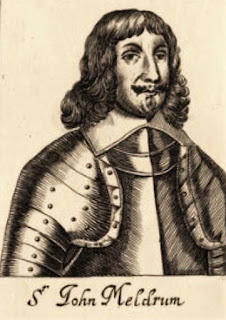 However, it seems the Cheshire Foot rallied and delivered a series of well directed volleys which together with the possible return of the foraging cavalry seems to have have turned the course of the battle, seeing the dispersal of the main Royalist army in North Wales, with 500 men killed and around 1500 taken prisoner. The Parliamentary losses are recorded as just forty men which however included Sir William Fairfax, commanding the Yorkshire contingent.

As can be seen the castle paid the price, like so many others, for its role in the Civil War, in being well and truly destroyed to prevent its being used again.

Montgomery, as can be seen, is in much better shape with its glorious collection of Georgian houses around the town's market square. 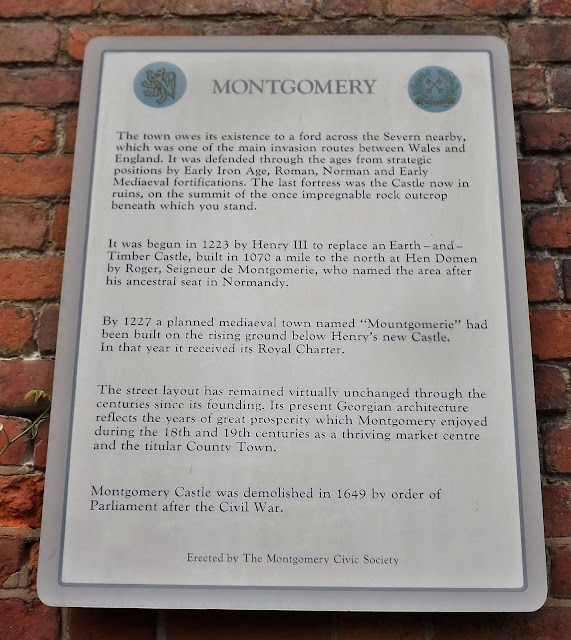 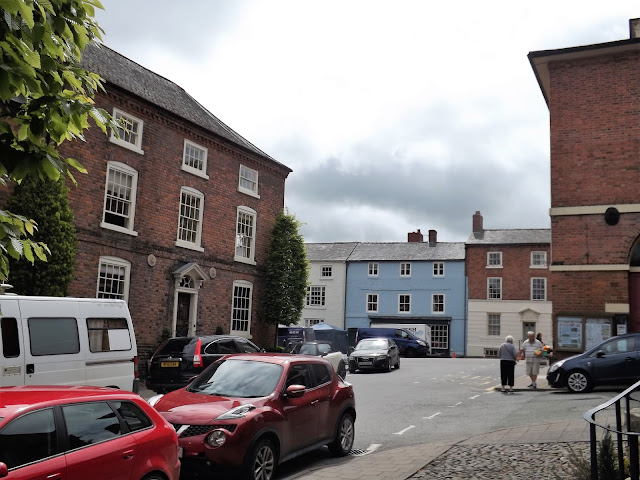 Following a great day out we headed off to the historic county town of Shropshire, Shrewesbury, built on a loop in the River Severn with a medieval street plan containing 660 listed buildings, many timber framed dating to the 15th and 16th centuries; and including our stop for the night, The Lion Hotel a former 17th century coaching house and able to lay claim to a few historic celebrities as former guests. 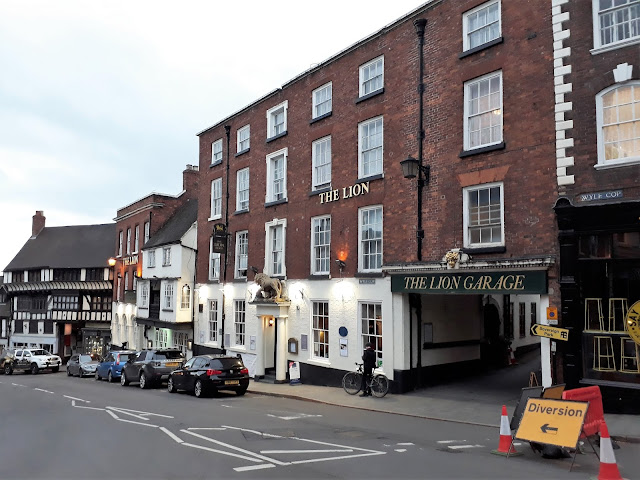 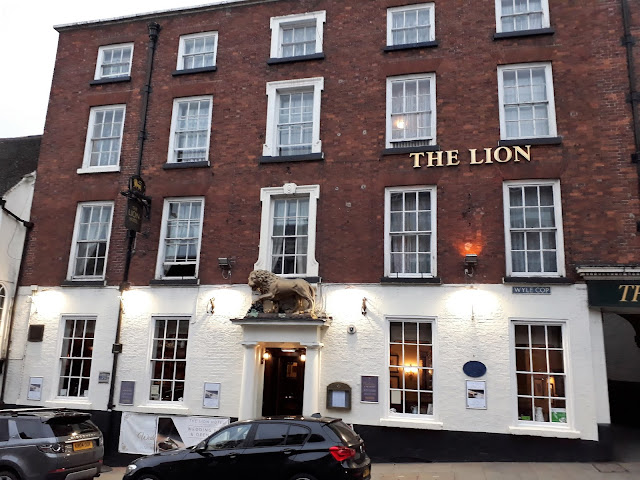 Before enjoying a well deserved dinner, Steve and I took time to soak up some of the spendour of the towns architecture as well as a few of its hostelries. 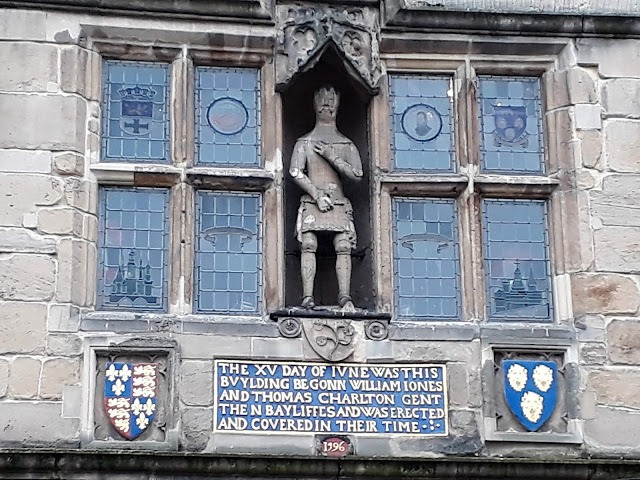 Shrewsbury is a lovely town and I have made a mental note to make another visit.

In part two Steve and I set off to check out the battlefields of Shrewsbury and Mortimers Cross, which saw the initiation to battle of two of England's greatest warrior kings.