All at Sea - On the Stocks in JJ's Dockyard, Spanish Builds Part Three

The next ship to fit out for my Spanish collection of models is the 74-gun third rate Montanes (Highlander) which was launched in May 1794 at Ferrol, another design based on an original design, the Ildefonsino class from the Spanish Chief Engineer Landa but with changes to the hull designed into the ship by Jose Martin de Retamosa that improved stability and speed through the water.
Her design led her to be the named ship of her class of four, the 80-gun Neptuno and Argonauta and the 74-gun Monarca all destined to be lost in the great storm that followed the Battle of Trafalgar. 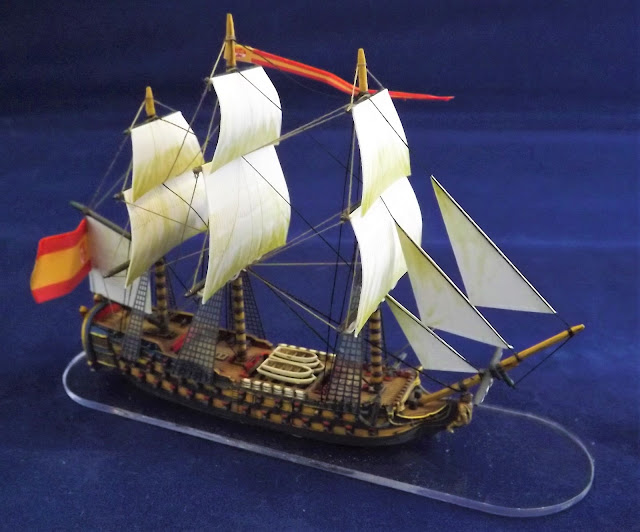 Within a year of a launch she saw her first combat on 30th March 1795 during the Pyrenees War against the French when alone she ran into a French squadron of one first rate seven other ships of the line and two frigates patrolling the Catalonian coast.
Thanks to her fast sailing attributes, Captain Jose Jordan managed to get his ship in to the bay of San Feliu de Guixols, anchoring close in to supporting shore batteries and presenting her broadside  and fending off the attacking French ships for two hours until they gave up trying to defeat the hard fighting seventy-four. 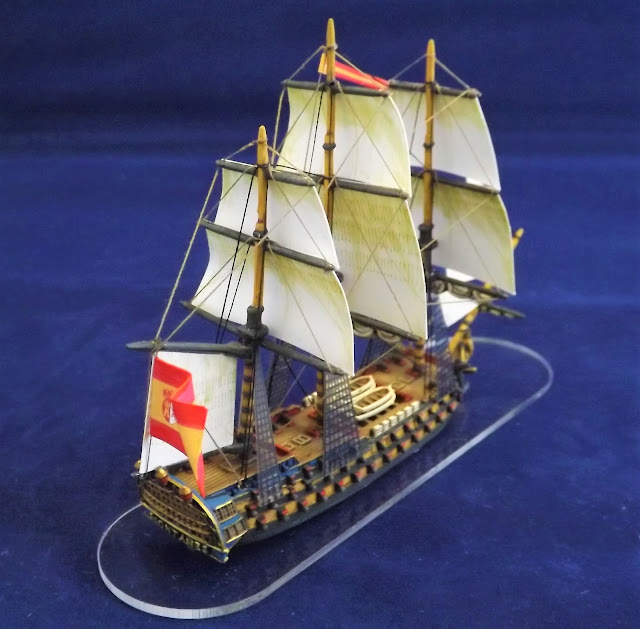 Following this action, Montanes was destined to spend the rest of her time operating with the South American squadron off Chile, Peru and the Philippines until her return to Spain in 1803.
In March 1805 following her overseas deployment Montanes was in obvious need of a slight refit and was disarmed and taken in hand to be careened and re-coppered, getting back into service in time to join Admiral Villeneuve's Combined Fleet in August and sailing to Cadiz. 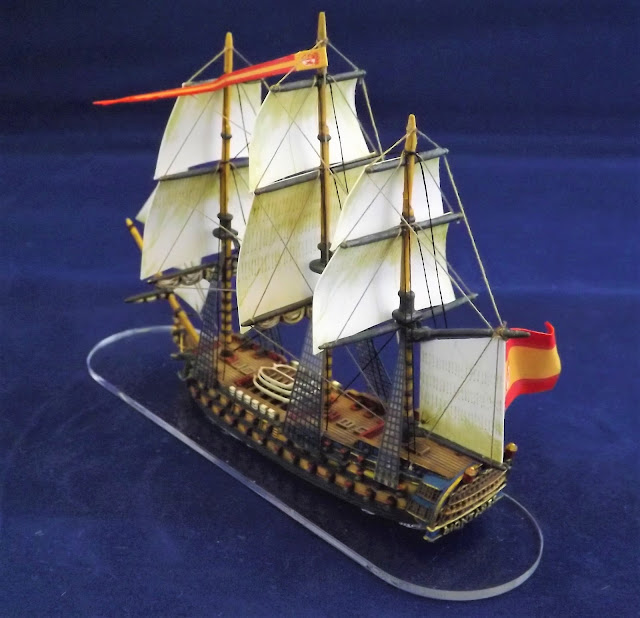 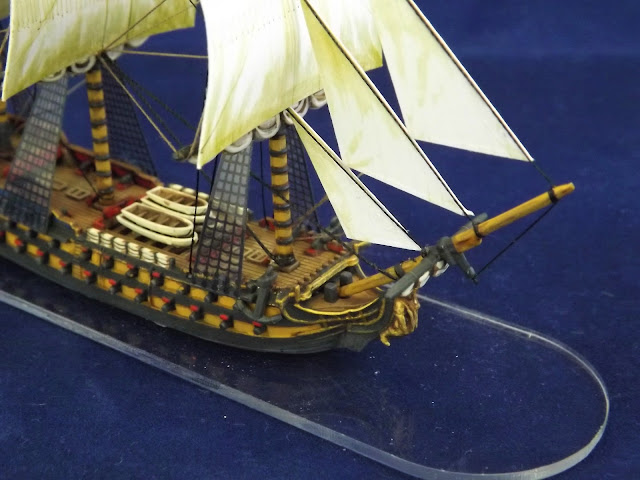 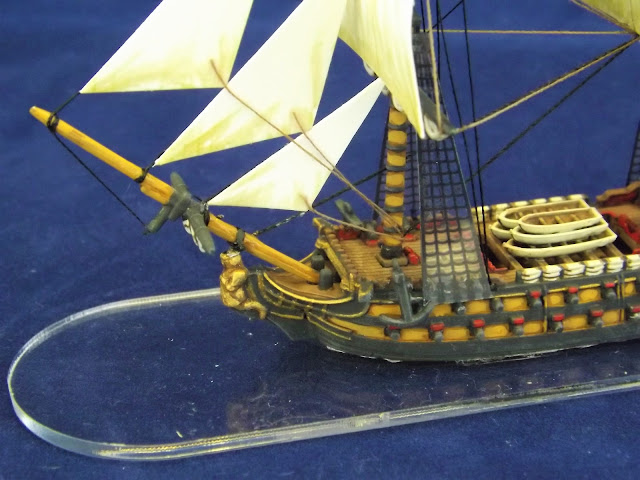 At Trafalgar, Montanes was commanded by Captain Don Jose Francisco Alcedo a highly experienced officer having joined the navy in 1774 taking part in actions against Algeria in 1775 and the British during the American War of Independence at Gibraltar and in the Channel; later seeing action in the Caribbean in 1794 at the capture of Port Dolphin, Santo Domingo. 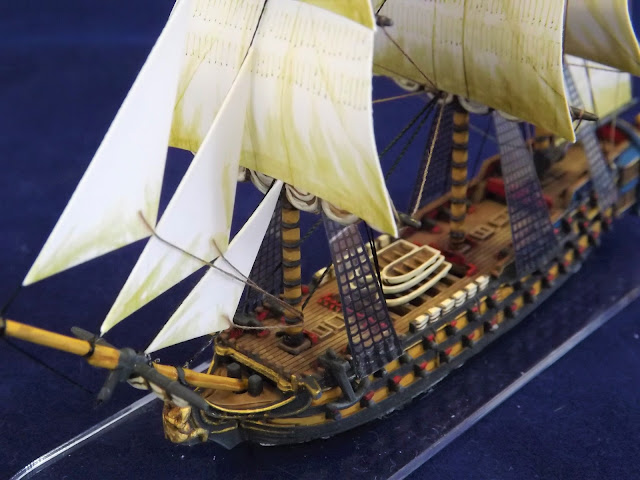 The Montanes was part of the Van Squadron of Observation which at noon on the 21st October following the turn with the wind at 08.00 found her towards the rear of the Combined Fleet sailing to windward of the Swiftsure and astern of the Aigle. 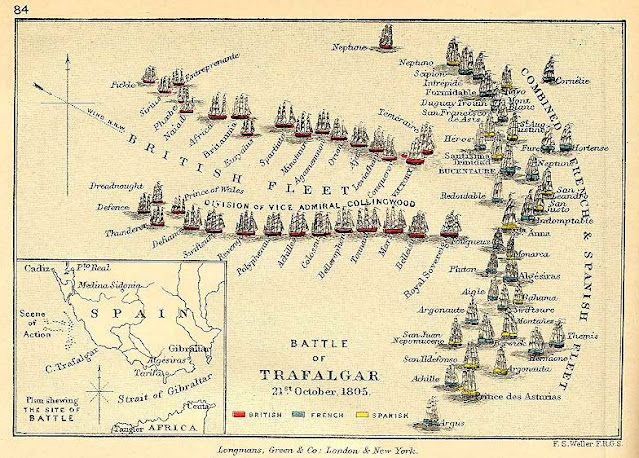 As with other ships in the squadron she opened fire on Admiral Collingwood's lee column and within the hour would find herself bow raked by the double-shotted HMS Bellrophon 74-guns as she passed between the Montanes and the Bahama, then to find herself stern raked by Captain Richard King's HMS Achille 74-guns, before she luffed up on the starboard side to engage the Montanes at pistol-shot range. 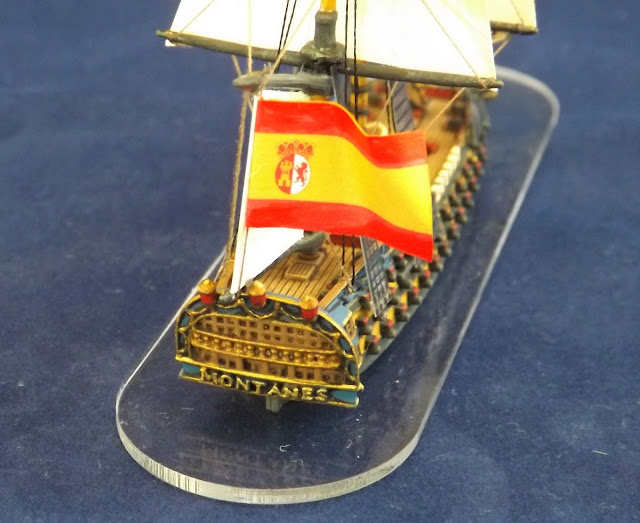 Lieutenant Don Ajeo Rubalcava assumed command on the death of Captain Alcedo and the wounding of his first lieutenant and left an account of the fight that followed as the two ships hammered away at each other for about half an hour;
'... At one o'clock a three decker (actually a two decker) approached to place herself a pistol shot from us, pouring a terrible fire into our larboard quarter, which caused great havoc among the people, to the hull and to the rigging ...

It was just then that Captain Alcedo was killed and Rubaclava took command, he continues:
'At this time the officer of the quarter-deck Don Meliton Perez, informed me that I should have to take over command of the ship on account of the said losses and I observed in passing the main-deck that the crews of all the guns aft were out of action, many being stretched dead and dying on the deck. The same thing was apparent in the chief guns on the quarter-deck, but it did not detain me from going up on to the poop, where I instructed the midshipman entrusted with the charge of the colours that he should stand by them and on no account should he haul them down.
Next I gave orders to the officers on the gun-decks to collect crews from all the guns capable of being employed and that they should fire on any enemy ship, keeping as close to the wind as possible ....'
The Montanes drifted away to the lee of the melee and joined the frigates and did not rejoin the action, losing her foremast together with 7% of her crew (20 dead and 29 wounded) leaving her still in a fighting condition and to be able to take part in enabling the recapture of the Santa Anna and Neptuno after their capture by the British, returning with them to Cadiz after the battle.
Following former allies becoming sworn enemies with the French invasion of Spain and the subsequent Peninsular War, Montanes, still in Cadiz following the British blockade of the port took part in the battle between the French and Spanish ships that became known as the Battle of Posa de Santa Isabel on the 14th June 1808 which resulted in the five French ships of the line and a frigate, under the command of Admiral Rosily-Mesros surrendering together with his 4,000 sailors.
Following that she was employed running prisoners, supplies and troops between Cadiz, Ferrol and the Canary Islands before being lost in a storm in 1810 preparing to leave Cadiz for Peurto Rico. 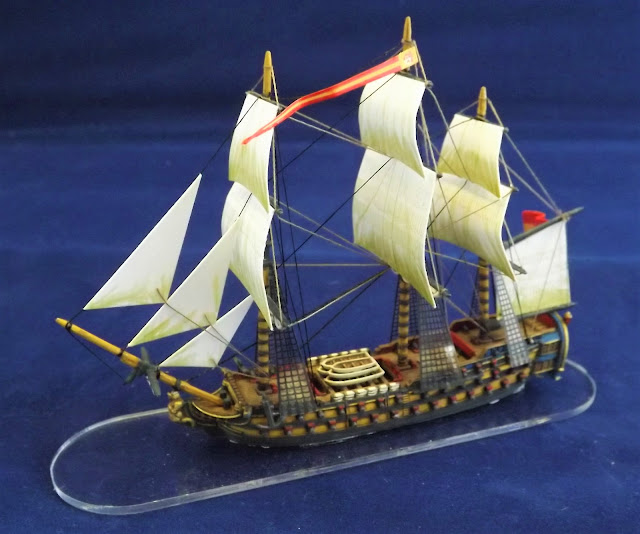 At Trafalgar, Montanes is shown carrying 28 x 32-pdr long guns on her lower deck, 30 x 18-pdrs on her upper deck, 12 x 8pdrs on her quarterdeck and 4 x 8-pdrs on her forecastle, with a crew compliment of 715 consisting of 407 naval personnel, 255 soldiers and 53 marine artillerymen.
Sources referred to in this post:
The Trafalgar Companion - Mark Adkin
https://threedecks.org/index.php?display_type=show_ship&id=2708
https://modelismonavaldeinvestigacion.webnode.es/products/navio-montanes/
https://www.carlosparrillapenagos.es/pintura-naval/
Next up, more adventures in the land of Vassal and the remaining ships in my Spanish squadron are fitted out and come under the camera.
Posted by carojon at 00:23