All at Sea - On the Stocks in JJ's Dockyard, Spanish Builds Part Five

The Neptuno was an 80-gun ship of the Montanes class of third rates which I covered in my previous post looking at her sister ship of that name, the others being the 80-gun Argonauta and the 74-gun Monarca.
All at Sea - Montanes
Like the Montanes, Neptuno was also built at El Ferrol and launched there on the 26th November 1795, being commissioned on the 7th January 1796, just prior to the Spanish declaration of war against Britain in August 1796. 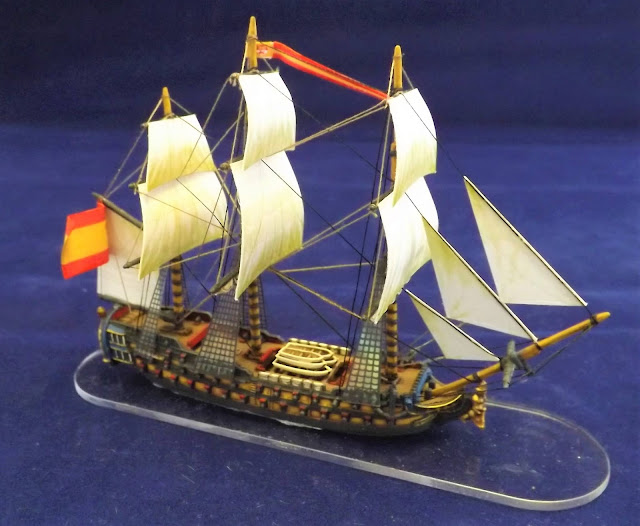 By October she was based in Cadiz as part of Admiral Langara's fleet, later to be commanded by Admiral Cordoba, consisting of  twenty-seven ships of the line and eight frigates, Spain's contribution to a Franco-Spanish plan to sail a combined fleet into the English Channel to cover an invasion of the British Isles. 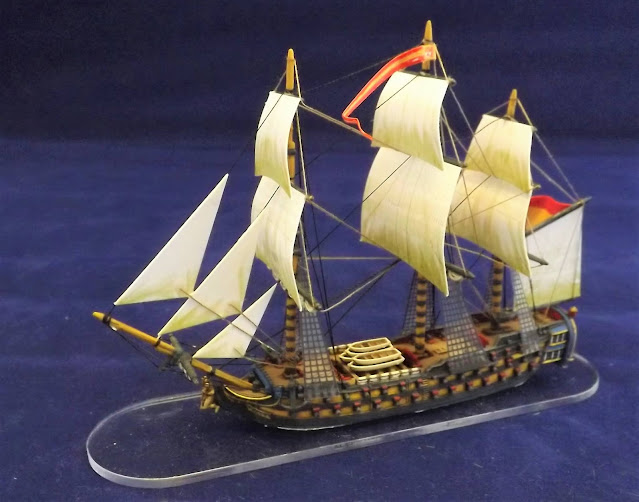 The plan was stymied when Cordoba fell in with Admiral Jervis's Mediterranean squadron at the Battle of Cape St Vincent on the 14th February 1797 but not before the Neptuno together with Terrible 70-guns and Bahama 74-guns were detached under Commodore Nava bound for Algaciras and thus missed the battle.
The Neptuno would continue to be based at Cadiz under the command of Admiral Jose de Mazzeredo y Salazar, perhaps one of the most gifted of Spanish commanders and hastily reinstated by prime minister Godoy after the failure by Cordoba at St Vincent, that after Godoy had previously sacked Mazzeredo for pointing out the lack of supplies and material being supplied to the Spanish fleet. 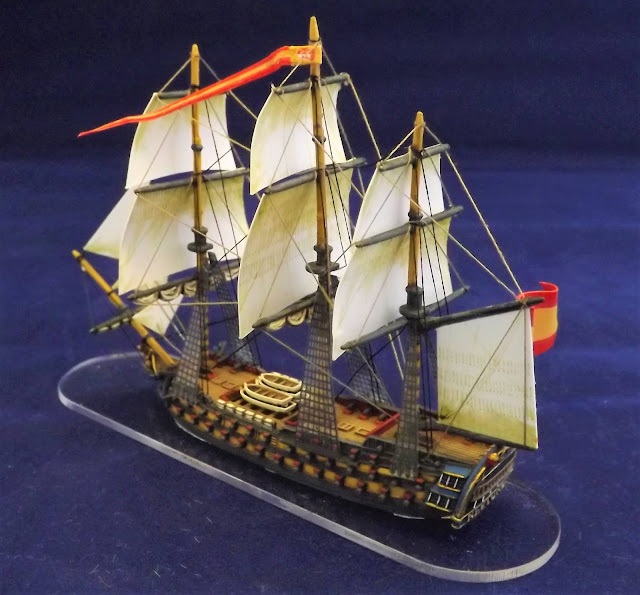 The Neptuno as part of Mazzeredo's fleet would spend her time in the next few years cruising the western Mediterranean in cooperation with French Admiral Bruix's fleet giving the combined squadrons a total of just over forty ships versus the sixty of the British Mediterranean squadron which in 1799 were spread out across the Mediterranean in several distinct squadrons
French and Spanish war aims were however not the same, so whilst Mazzeredo was keen on directing naval effort to the reconquest of Minorca from the British, Bruix was more concerned with defending Malta and resupplying French troops stranded in Egypt following Nelson's victory at the Battle of the Nile in August 1798.
However the combined fleet would leave the Mediterranean in July 1799 bound for Brest which is where the Neptuno was in 1801 needing work to clean up her hull with a careening job which failed to deal with a major hole in her hull that caused her severe flooding when she set sail for Santo Domingue under French Admiral Latouche Treville.
The flooding forced her to detach from the Franco-Spanish squadron and make for El Ferrol for urgent repairs which is the subject of Carlos Parilla Penagos's picture at the header of the post. 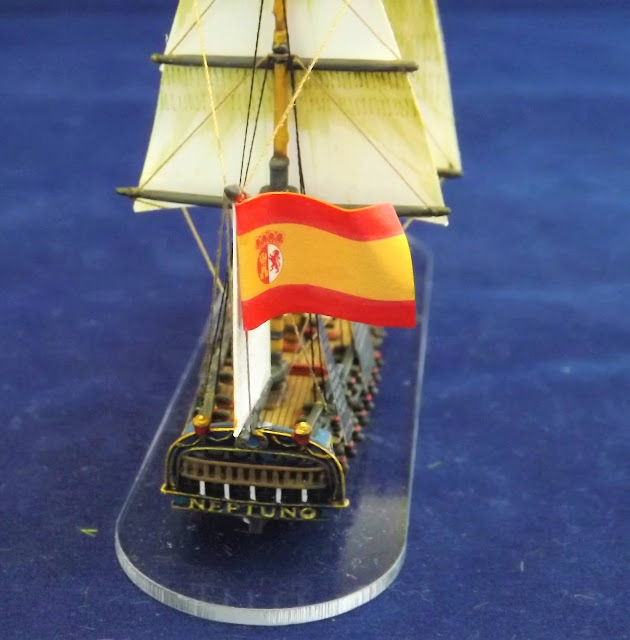 From the 3rd to the 5th of February 1802 Neptuno was part of French Admiral Villaret Joyeuse's squadron in support of troops landed at Cap Haiten which they captured and burned as part of the combined operation to take back the island of Saint Domingue from Toussant Loverture's Haitian Rebel army. 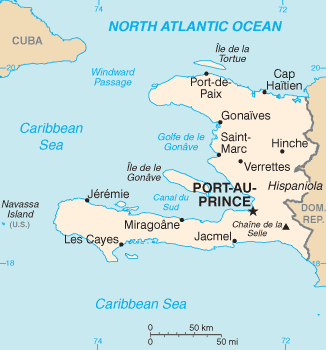 Following this operation, Neptuno returned to Spain and by May 1802 with the Peace of Amiens signed, she was in Cadiz, being placed in ordinary at El Ferrol by October not being recommissioned until February 1805 with the build up of Franco-Spanish squadrons prior to the Trafalgar campaign.
When French Admiral Villeneuve's Combined Fleet gathered at El Ferrol in late July following his sortie to the West Indies and his interception by Vice Admiral Sir Robert Calder's fleet off Cape Finisterre on the 22nd July, the Neptuno was under the command of Captain Don Cayetano Valdez y Flores Bezan and it would be under Valdez that Neptuno would see action at the Battle of Trafalgar in October 1805. 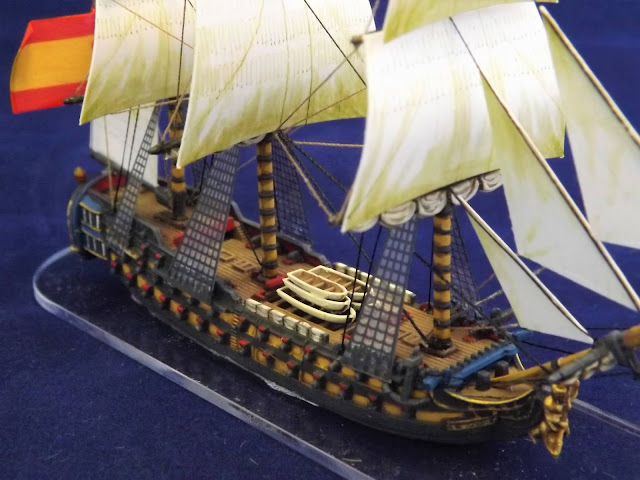 Captain Valdez is described as a skilled officer and accomplished navigator having commanded the Atrevida 16-gun corvette as part of Admiral Malaspina's round the world expedition 1789 to 1794 and had combat experience commanding the Infante don Pelayo 74-guns that came to the rescue of the Santisima Trinidad at the Battle of Cape St Vincent in 1797, later being part of the Franco-Spanish expedition to retake Santo Domingue in 1802, seeing action at Guarico and Port Dolphin. 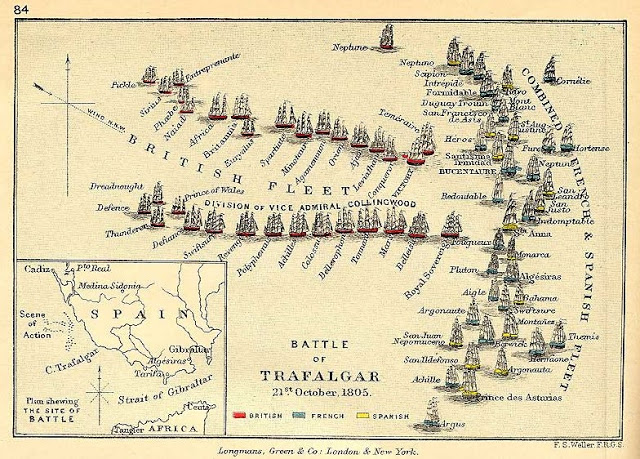 When the opposing fleets made contact early in the morning of the 21st October the Neptuno had been the rear most ship in the Combined Fleet, but with Admiral Villeneuve's order to wear around 180 degrees at 08.00 in his effort to head back to Cadiz, the Neptuno found itself as the lead ship in the Allied van. 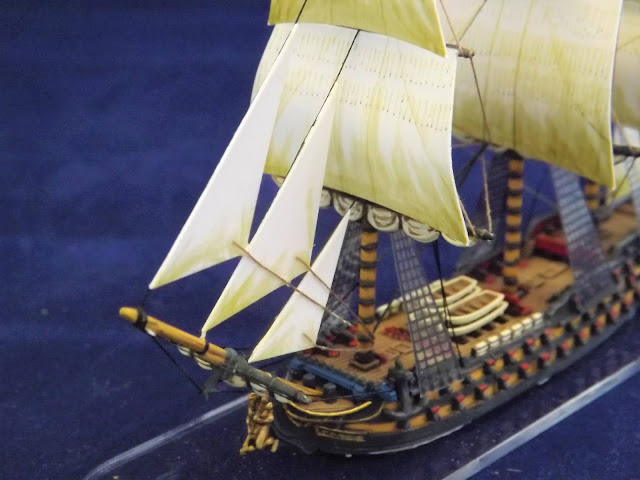 At about 14.00 the Neptuno together with the other Allied ships in the van turned about to enter the melee only to find herself met by HMS Minotaur 74-guns and Spartiate 74-guns who, engaging her heavily on each side, forced her to surrender after an hour's fighting that left her without masts together with 89 casualties (42 dead and 47 wounded).
Mr Francis Whitney, Master of the Spartiate recorded in the ship's records about the action with the Neptuno;
'Lay on her quarter ... firing obliquely through her, she returning at times from her stern chase and quarter guns. At 4.10 wore, not being able to bring our guns to bear, to engage her on the other tack, the other four ships having left her (Dumanoir and his three French ships)  .... 4.22 The Spanish ship engaged by the Spartiate and the Minotaur had her mizzen mast shot away. 5.10 she struck after having been very much disabled. She proved to be the Neptuno, 80 guns.

Mr Robert Duncan, master of the Minotaur, also recorded the action;
'At 2.10, observed four French and one Spanish ships bearing down towards the Victory. Hauled towards them, as did the Spartiate, and commenced firing on the Admiral's ship (Formidable). Passed the four French ships and attacked the Spanish ship with a broad pennant flying (Commodore Valdez). At 4, wore and got alongside of her, Spartiate in company. At 5.12 she struck; found her to be the Neptuno of 84 guns.
On the Neptuno Captain Valdez recorded his account at around 16.00.
'the mizzen mast fell and in its fall I was wounded in the head and neck and lost consciousness and was carried below, where I had never thought to go, notwithstanding that I had already been wounded three times during the action ... finally a few minutes before sunset, having 30 dead and 47 wounded, totally dismasted and overwhelmed by the superior number of the enemy who surrounded my ship - which was the only one in these waters - we decided to strike ...' 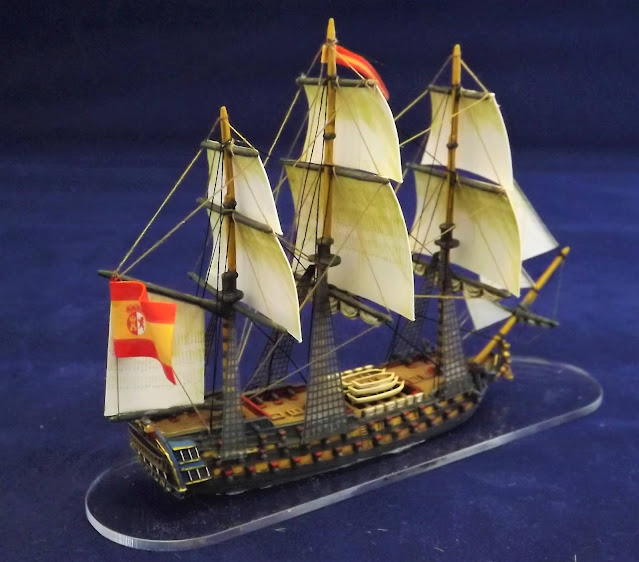 Neptuno was the last Allied ship to surrender at Trafalgar and a boarding party of 48 men led by Marine Second Lieutenant Thomas Reeves went aboard from HMS Minotaur who secured the prisoners before taking a tow from the Minotaur at 03.30 the next day.
However the combination of storm conditions after the battle together with Allied surviving ships sallying from Cadiz to retake captured prizes that caused the British to abandon them as they prepared to defend themselves also saw the British prize crew on Neptuno overcome by the Spanish crew as the ship was taken under tow by the French frigate Hermione.
Despite being taken back to Cadiz Bay the force of the storm caused the Neptuno to drag her anchors as she was pressed onto the shore where she was pounded to pieces with twenty men lost in the wreck.
At Trafalgar Neptuno was armed with 30 x 32 pdr long guns on her lower deck, 32 x 18 pdrs on her upper deck, 8 x 12 pdrs on her quarterdeck and 2 x 12 pdrs on her forecastle added to which were 18 x obusiers.
Her crew numbered 800 men (445 naval personnel, 285 infantry and 70 marine artillerymen).
Sources referred to in this post:
The Trafalgar Companion - Mark Adkin
https://threedecks.org/index.php?display_type=show_ship&id=2657
https://www.carlosparrillapenagos.es/pintura-naval/
Next up Walks on Ancient Dartmoor, Vassal adventures with Washington's War and the Spanish get some frigates
Posted by carojon at 22:28