All at Sea - On the Stocks in JJ's Dockyard, Spanish Builds Part Two


It's so nice to be back into working up the 1:700th collection of ships and the next part of the build which is concentrated on the Armada Espagnol, started with my build of Santisima Trinidad  back in May.
As covered in my previous post announcing this work, the mighty 112-gun Santa Anna was destined to pick up where we left off and thus featured as my header is the amazing work of Carlos Parilla Penagos depicting the great Spanish first rate hoving into view under a full spread of canvas and formed part of the inspiration in the production of this model.
The Santa Anna was a Spanish 112-gun first rate ship of the line designed by Miguel de la Punte and built by Jose Joaquin Romero y Fernandez de Landa and when launched on the 28th September 1784 at Ferrol, was the prototype for a class of 112-gun ships to follow, which included the Mejicano, Conde de Regla, Salvador del Mundo, Real Carlos, San Hermenegildo, Reina Maria Luisa and Principe de Asturias.
Having completed her sea trials in February the following year, under Captain Felix de Tejada who reported that "she kept the battery in good use in a fresh wind and heavy seas" his report effectively gave the go ahead for work to commence on her sister ships that would form the core of Spanish first rates during the French Revolutionary and Napoleonic Wars. 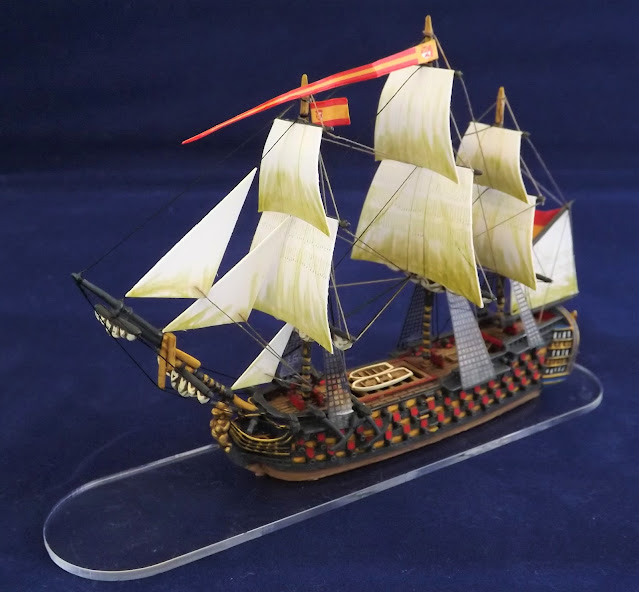 The Santa Anna appears to have had a fairly quiet war, at least in the early years with her shown as 'In Ordinary' in 1793, acting as the flagship for Teniente General Domingo de Perez de Grandallana between 1797 to July 1799. 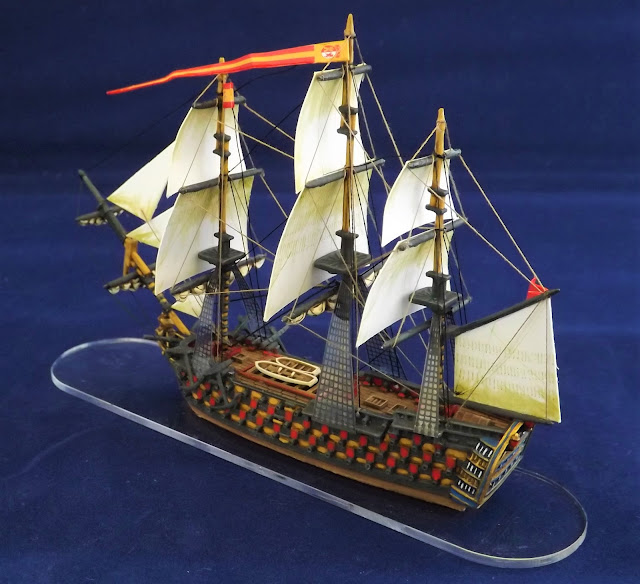 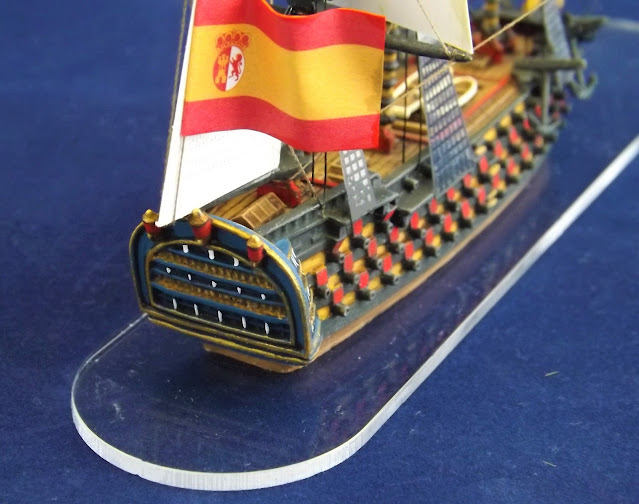 Santa Anna was to have her particular moment of glory and an immortal place in naval history on 21st October 1805 when as part of the Combined  Franco-Spanish fleet under Admiral Villeneuve, she was the leading ship in the rear division under Captain Don Jose Gardoqui a seasoned commander having taken part in the capture of HMS Ardent 64-guns on 17th August 1779 in the English Channel and the only Spanish captain to have commanded three of the other Spainish 112-gun ships previously.
The Santa Anna was not part of the combined fleet when it sailed for the West Indies in the summer of 1805 as she was laid up in Cadiz having her hull copper sheathing replaced at that time and although joining the fleet in October it appears Villeneuve was less than happy with her state of completion describing her as 'barely out of the dockyard' and 'not in a condition to engage' 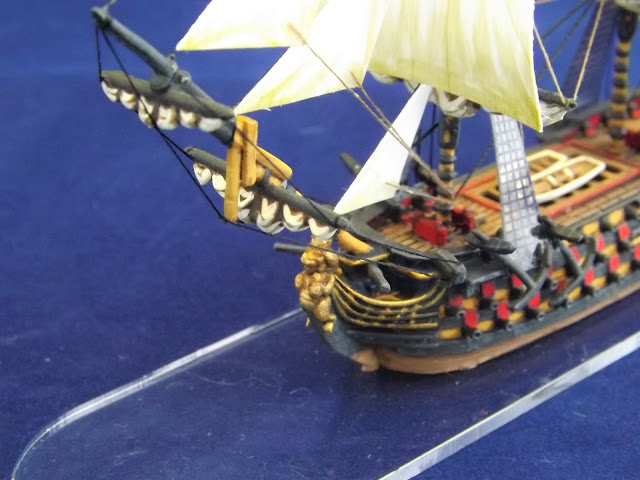 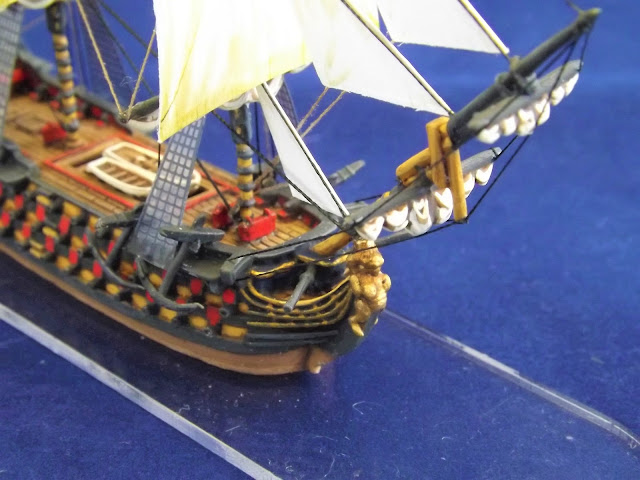 Being the leading ship of her division and flying the pennant of Admiral Alava at the head of her foremast, she became the focal point for Admiral Collingwood's attack as he led in the British lee column at Trafalgar, describing the Spanish flagship as that 'Spanish Perfection'. 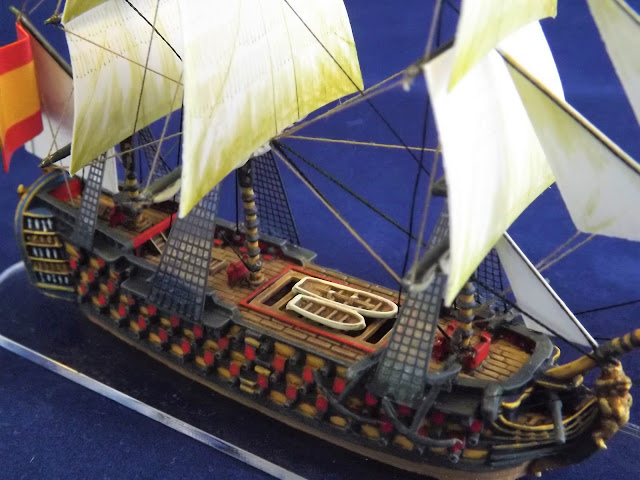 The Royal Sovereign broke through, astern of the Santa Anna shortly after noon, delivering a devastating raking broadside from which the Spanish flagship never really recovered.
Following up on this opening attack, Royal Sovereign luffed up alongside Santa Anna to begin exchanging broadsides yardarm to yardarm.
The next British ship to pass through the line was HMS Bellisle 74-guns, which promptly delivered another raking broadside into the stern of the Santa Anna which struck at about 14.15 at the same time as Collingwood learnt of Nelson's death.
The Santa Anna was by then a dismasted, crippled hulk, with casualties amounting to 238 (97 killed and 141 wounded, including Captain Gardoqui and Admiral Alava) surprisingly light at just 20% following the close range pounding she received.
Taken in tow by the frigate HMS Euryalus, the Santa Anna would be recaptured by a Spanish squadron two days later and towed back into Cadiz for repairs. 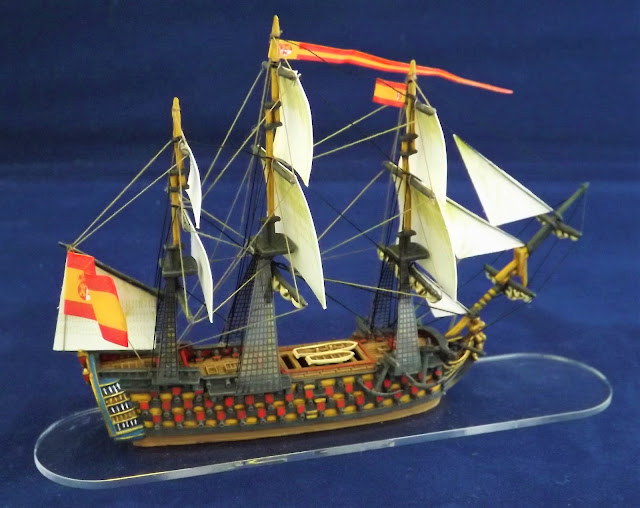 At Trafalgar Santa Anna would have carried 30 x 36-pdr long guns on her lower deck, 32 x 24-pdrs on her middle deck, 32 x 12-pdrs on her upper deck, 12 x 8-pdrs on her quarterdeck  and 6 x 8 pdrs together with 6 x 24-pdr obusiers on her forecastle.
Needing 250 men on her capstans to lift her mighty anchors, Santa Anna had an over-strength compliment of 1,189 crew consisting of 720 naval personnel, 383 army and 86 marine artillerymen.
Sources referred to in this post:
The Trafalgar Companion - Mark Adkin
https://threedecks.org/index.php?display_type=show_ship&id=2644
https://www.carlosparrillapenagos.es/pintura-naval/
Next up, a book review providing some fictional inspiration to our hobby and the Spanish 3rd Rate Montanes 74-guns joins the fleet.
Posted by carojon at 00:13