All at Sea - On the Stocks in JJ's Dockyard, Spanish Builds Part Four

The Spanish 74-gun ship of the line San Juan Nepomuceno was named after the 14th century priest and martyr St John of Nepomuk the saint of Bohemia and, likely because of his being put to death by drowning, the protector from floods and a similar fate as his.
She was built and launched in the naval shipyard close to Santander on the north coast of Spain in the small town of Guarnizo in 1765 being the first in her class of six sister ships. 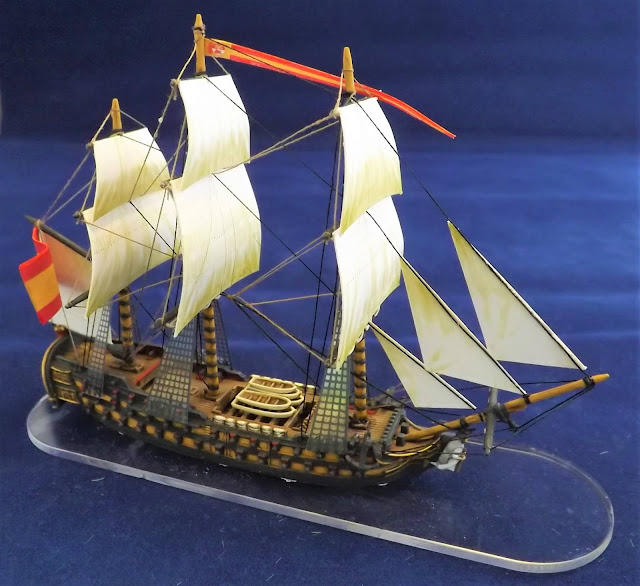 When Spain entered the American War of Independence against Britain the San Juan Nepomuceno left Spain in December 1778 bound for Havana, Cuba and service in the Caribbean supporting Spanish operations against British possessions in the area, together with the mundane work of escorting convoys and troop transports. 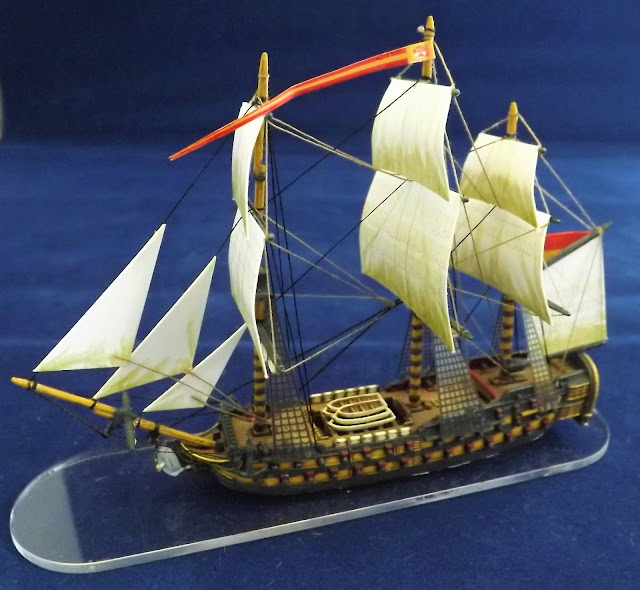 In July 1793 she and seven other ships of the line left Cartagena bound for the Gulf of Lyon in the Mediterranean to join Admiral Juan Laranga's Spanish fleet, entering Toulon the next month along with British ships under Vice Admiral Lord Samuel Hood invited in by French Royalists to support their holding of the key French naval base in the name of the King of France.
San Juan Nepomuceno would continue to serve with the Mediterranean fleet after Toulon, taking part in the siege of Rosas (Roses),  the Franco-Spanish War of the Pyrenees, during the wars of the First Coalition, when she assisted in the landing of troops to support the Spanish garrison under siege by French troops. 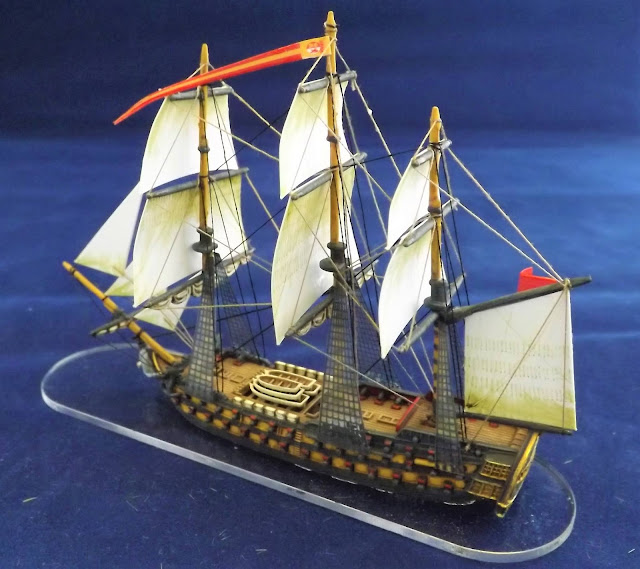 In August 1796 Spain became an ally of Republican France and consequently at war with her former ally Great Britain.
The next time the San Juan Nepomuceno was in action was as part of Vice-Admiral Don Jose de Cordova's fleet which left Cartagena in January 1797 escorting a mercury shipment for use in the treatment of its silver imports from the Americas, with the later intention of sailing north to join up with the French fleet in Brest for a joint operation to support a landing of French troops in Britain; only for the Spanish fleet to be intercepted as it entered the Atlantic by the British Mediterranean fleet under Admiral Sir John Jervis off of Cape St Vincent on the 14th February. 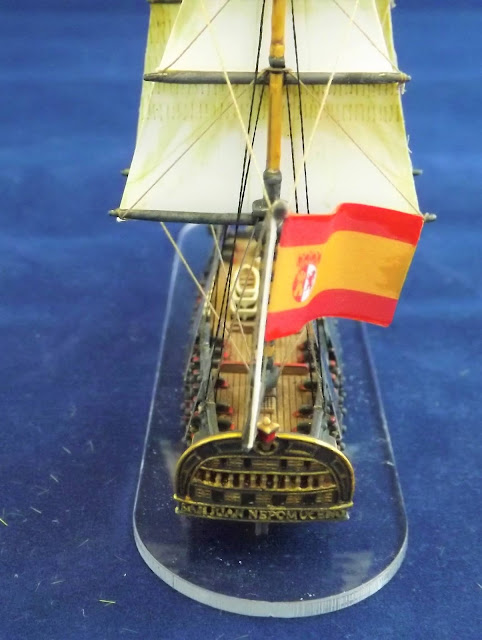 The San Juan Nepomucheno was under the command of Captain Antonio Boneo and together with seven other ships of the line was part of the Vanguard Squadron including the Purisima Concepcion 112-guns, the flagship commanded by Francisco Javier Morales de los Rios.
The Vanguard came off lightly in terms of casualties and with no ships lost, and the San Juan Nepomucheno being fortunate in suffering no losses herself in the action, that saw four Spanish ships lost, 800 men killed and 3000 wounded.
The San Juan Nepomucheno would return to Cadiz and would continue her operations with the Mediterranean fleet in the latter years of the century as France and Spain attempted to coordinate their actions in support of the retaking of Minorca from the British. 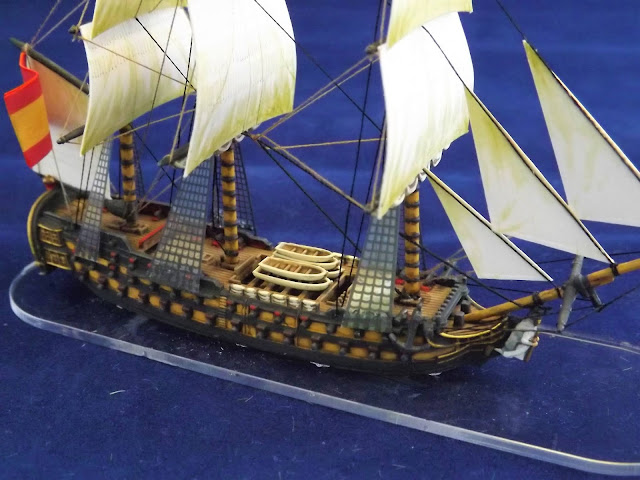 However with the Peace of Amiens and the start of the Napoleonic War in 1803 San Juan Nepomuceno was in ordinary in Ferrol, disarmed and careened, recommissioning in June 1805 in time to join the Combined Fleet in August prior to the climactic Battle of Trafalgar, 21st October 1805.
It would be at Trafalgar that the San Juan Nepomuceno would display the courage and tenacity of her crew under the command of captain Commodore Don Cosme Damian Churruca deployed as the last ship in the Combined Fleet's line.
The battle was to prove a bad day for the Spanish ship as her position at the rear of the line not only presented her as one of the target ships to those British ships in the rear of Admiral Collingwood's lee column, precisely Captain John Conn's Dreadnought 98-guns which came alongside her, but, following the battering received from the three-decker, her progress took her among the other ships in the British column, causing her to receive yet more fire from the Bellerophon 74-guns and Tonnant 80-guns.
It only took a ten minute battering from the Dreadnought's 46-gun broadside to reduce the San Juan Nepomuceno to a dismasted hulk, but not before the Spanish crew had fought back with all the effort they could muster and with Captain Churruca declaring to his young nephew, on board as a volunteer, that he would meet his death in the battle, but that he would sink the ship before surrender.

The Spanish account of his death records that after personally directing his gunners, he returned to the quarterdeck when;
' ..... a cannon ball hit his right leg with such violence as almost to take it off, tearing it across the thigh in the most frightful manner. He fell to the ground (deck), but the moment he made an effort to raise himself, supporting himself on one arm. His face was as white as death, but he said, in a voice that was scarcely weaker than his ordinary tone: 'It is nothing - go on firing!'
Captain Churruca was conscious to the end of his agonising death, not complaining of his sufferings and thanking his men for their courage, before he passed away.
When the San Juan Nepomuceno struck she had lost her fore and mizzen-mast, her rudder smashed and her decks strewn with 103 dead and 131 wounded. 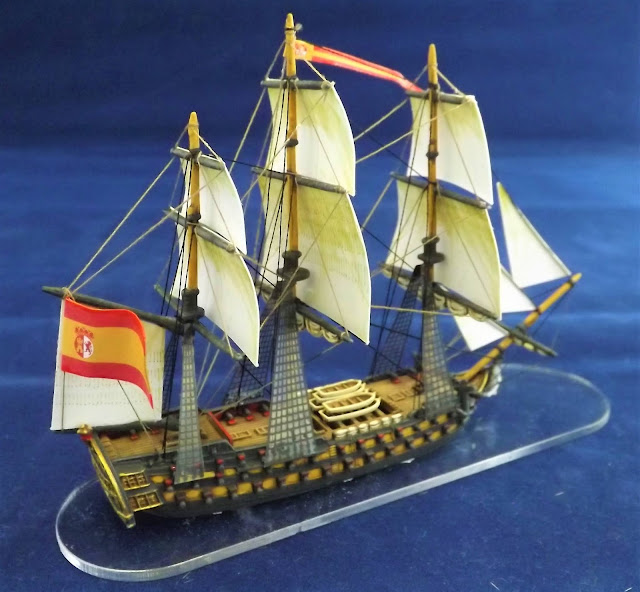 At Trafalgar the San Juan Nepomuceno was armed with 28 x 32-pdr long guns on the lower deck, 30 x 18-pdrs on the upper deck, 12 x 8-pdrs on the quarterdeck and 4 x 8-pdrs on the forecastle.
Her crew numbered 693 men (431 naval, 212 infantry and 50 marine artillery personnel), with her total casualties of 234 accounting for a 34% loss overall.
Sources referred to in this post:
The Trafalgar Companion - Mark Adkin
https://threedecks.org/index.php?display_type=show_ship&id=2744
https://www.carlosparrillapenagos.es/pintura-naval/
More Spanish builds to come, plus I've been having fun scratch building sloops or should that be corvettes?
Posted by carojon at 23:20