All at Sea - Spanish Third Rates of Renown (Monarca)

Monarca was ordered in 1791 and built and launched at El Ferrol on the 17th March 1794, undergoing proving trials in the autumn of that year alongside her sister ship Montanes under her first commander Captain Don Jose Justo Salcedo y Arauco who took command of the ship in July.
The trial comparison cruises conducted with Montanes between the Azores and Cadiz, escorting Atlantic convoys would see Monarca refitted with new masts and sails before joining Admiral Juan de Langara's squadron in December 1794 in support of the fortified Catalan town of Roses on the Costa Brava then under siege by the French, until it surrendered the following February but not before the garrison of three-hundred men were successfully evacuated by the Spanish navy, with the Peace of Basle ending the war with France signed in July 1795. 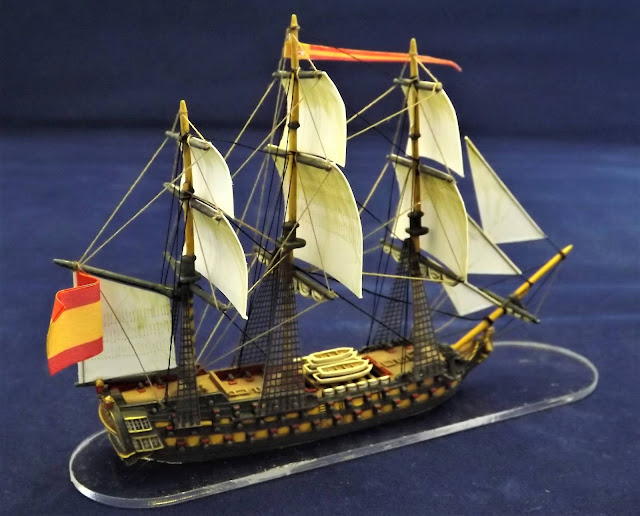 With war declared against Britain on the 19th August 1795 and the signing of the Treaty of San Ildefonso allying herself with France, Monarca would be assigned to escorting treasure convoys from Havana and Vera Cruz to Cadiz, until returning to El Ferrol in 1798 for much needed repairs.
El Ferrol would become the base of operations for Monarca from 1798 to the Peace of Amiens in 1802 coperating with the French squadrons operating out of Rochefort and Brest when able to avoid the British blockade and with the peace, Monarca would end the French Revolutionary War in the port, careened and disarmed, not returning to operations until November 1804 with the declaration of war against Britain on the 14th December. 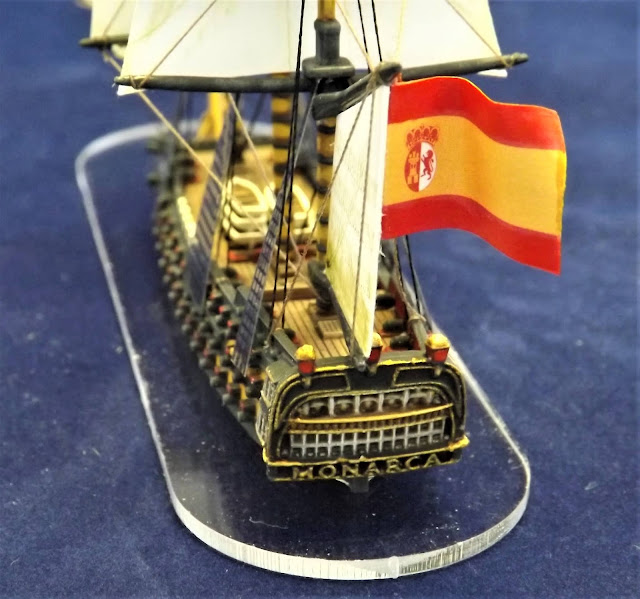 On the 13th August 1805, Monarca left El Ferrol bound for Cadiz as part of Vice Admiral Pierre Villeneuve's Combined fleet and under the command of Captain Don Teodoro de Argumosa, who had seen action at the Battle of Cape St Vincent in command of the San Isidro 74-guns, where he had exchanged fire with Captains Nelson and Collingwood commanding HMS Captain and Excellent respectively.
Thus it was that after a short stay in Cadiz, Monarca sailed with the Combined fleet on the 20th October in spite of enemy frigates seen the previous day as half the fleet struggled to get out of the harbour leaving the other half to exit the next morning in worsening weather, heavy seas, rain squalls and a wind veering to south-south-west, rising to almost gale force as the fleet headed into the Straits of Gibraltar. 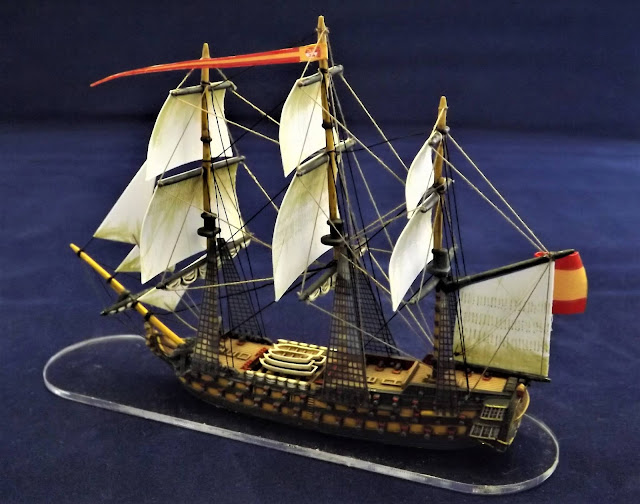 Originally part of the van squadron under Vice Admiral Alava in the flagship Santa Anna 112-guns along with Indomptable 80-guns, Forgeux  and Pluton 74-guns, the squadron would be the rear as Villeneuve reversed the course of the fleet back to Cadiz as the British bore down on his line of battle ensuring she would be in the centre of the action with Vice Admiral Collingwood's lee column.
The first British ship to engage the Monarca was HMS Mars under Captain George Duff who attempted to pass between her and the stern of the French 74-gun Forgueux, but soon found the gap closed by the French 74-gun Pluton, that had increased sail to pass Monarca and close the gap on Mars not before the British ship fired a close range broadside into the Monarca  which bore away under the fire
The next British ship to come up behind HMS Mars was Captain Charles Tyler's HMS Tonnant which managed to pass the Monarca and pour in her double shotted port broadside before stern raking the Pluton and bow raking the 74-gun Algeciras.
The first broadside from Tonnant was quickly followed by a second and appears to have been a crippling blow, badly damaging her fore and crossjack yards, bringing down her mizzenmast and causing Captain Argumosa to order his crew to cease fire and to haul down his colours earning the dubious honour of being the first Allied ship to surrender at Trafalgar. 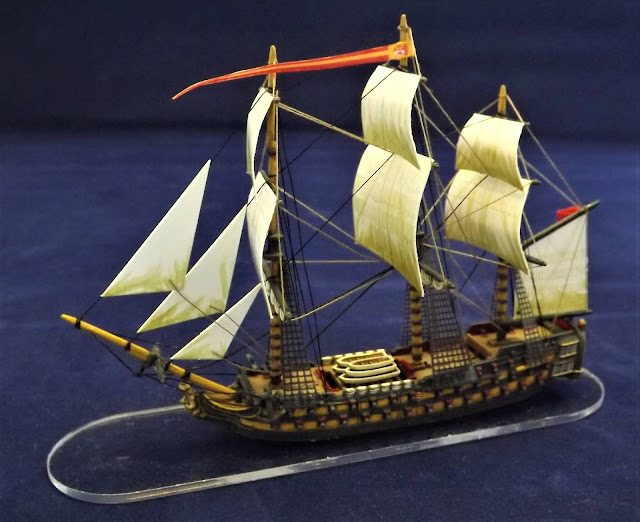 However as the Tonnant sailed on and no attempt was made to board Monarca and take possession of her, Argumosa raised his colours again, but it seems likely that, with the extensive damage and heavy casualties suffered, the fight had been knocked out of Monarca and she surrendered later in the battle after receiving further hits from HMS Bellrophon which sent across a party of Royal Marines to take control of the ship.
The Monaraca had suffered one of the highest total fatalities of any ship in the Combined Fleet with 101 killed together with a further 154 wounded, one of only eight ships to have fatalities into three digits, but it was perhaps the extensive damage caused to her hull and rigging that convinced Vice Admiral Collingwood that the ship could not be saved as a prize and she was thus burnt and deliberately wrecked on the 26th October. 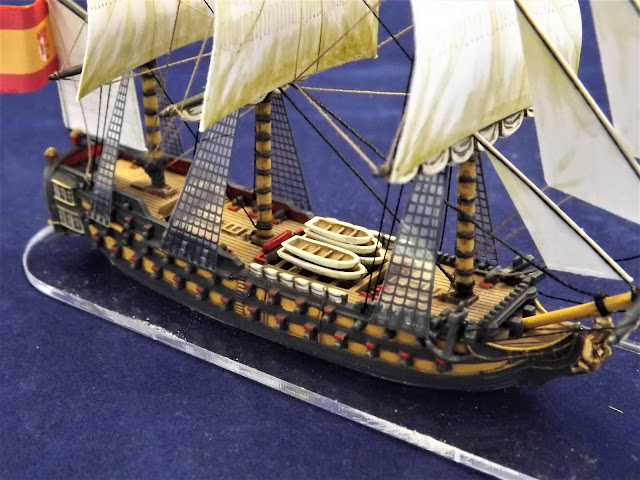 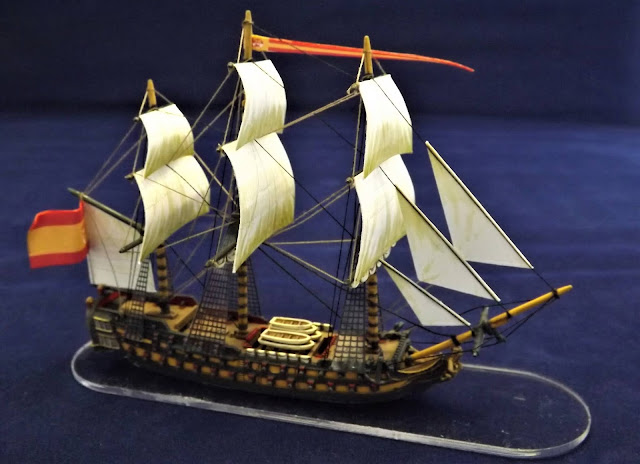 She had an over strength crew of 667 men which included 370 naval personnel, 253 infantry (45% of the men onboard) and 54 marine artillery.
Sources consulted for this post:
The Trafalgar Companion - Mark Adkins
The Battle of Trafalgar - Geoffrey Bennett
https://en.wikipedia.org/wiki/Spanish_ship_Monarca_(1794)
https://threedecks.org/index.php?display_type=show_ship&id=2711
Next up: I have a review of A History of the Royal Navy in the Napoleonic Wars by Martin Robson, the next Spanish third rate of renown, San Justo and a look at Unhappy King Charles the most recent game Steve M and I have been playing on Vassal.
Posted by carojon at 00:55