With the completion of the collection to represent the various national fleets at the Battle of Trafalgar recently shown here on the blog, I have been taking a short pause to put together the necessary materials to portray the game once we are able to regather.
All at Sea - Trafalgar Collection
This has principally focussed around pulling together my ideas for the necessary storage boxes to transport the collection and also getting the number of necessary sea cloth mats to replicate the several square miles of ocean over which the battle was fought and I intend to do a post looking at those materials once I have them to show.
In the meantime I have also been putting together table plans which has meant trawling through various sources to get the general consensus as to how the two fleets were arranged at various stages of the battle to see how I want the fleets to be arranged at the start and again I will do a post looking at this really interesting aspect of the hobby, namely big-battle planning.
However I considered the Trafalgar fleet build as very much a waypoint in creating the collection as a whole, looking to add additional models over time to allow other classic engagements from the era to be played out on the table, or should I say, several tables; and as outlined in the video looking at the work so far, mentioned my intention to press on with the work to complete the Spanish fleet to allow the largest collection of Spanish ships in battle to be presented, namely at the Battle of Cape St Vincent on St. Valentine’s Day, 1797.
This will see the addition of another nine Spanish third-rates and three first rates to bring the required numbers of models up to that target and work commenced almost immediately to press on with those models, of which the first four rolled down the slips and were fitted out this week, with three third-rates and a 112-gun first rate joining the collection.
These models are very much generic Spanish and not intended to represent any ship in particular and so I contented myself with applying my normal, 'Spanish-look' with plenty of gold ornamentations, red bulwarks and white and gold Castilian Lion figureheads, but also with the third-rates decked out in the Revolutionary War trim of yellow ochre strakes without the typical later chequerboard, as first used with my last batch of French third-rates for the Trafalgar build.
Once these final models are built, that will be it for my Dons, other that adding some more units to their light forces for some small actions I have in mind, and I will roll out the next additions as we go, starting with the next build which will have the mighty 118-gun French first rate, L'Orient in two versions, one with full sail and the other, of course, at anchor.
Anyway until then I present my latest additions to the Don's, with a thank you to all those who left kind comments of appreciation received here and on other forums for the Trafalgar Collection, and as often stated but nevertheless sincerely meant, they were very much appreciated.

At Cape St Vincent, the Spanish had on hand seven first rates, namely, the Santissima Trinidad 130-guns, and the Conde de Regla, Mexicano, Principe de Asturias, Purisima Concepcion, Salvador del Mundo, San Josef, each 112-guns.
With the Trafalgar collection, four such types were present if you include the rebuilt Rayo, so I will need to add another three, or should I say two with my new generic 112-gunner seen below. 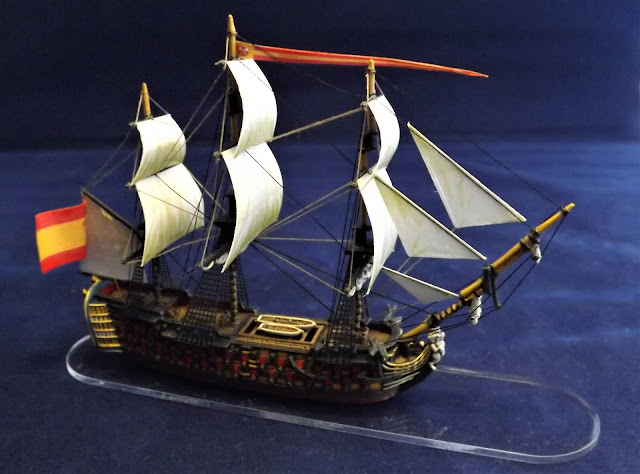 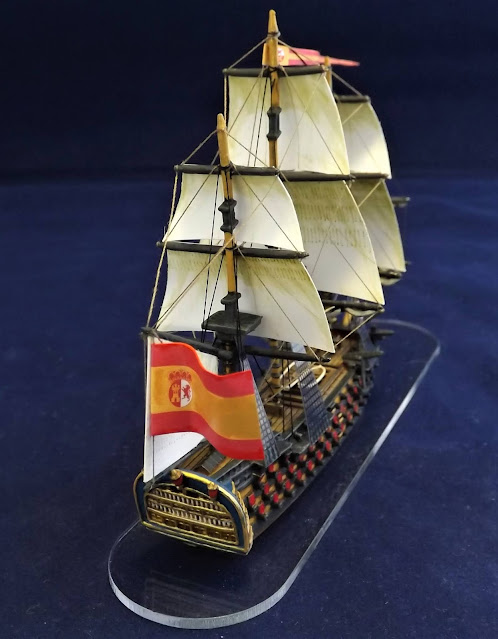 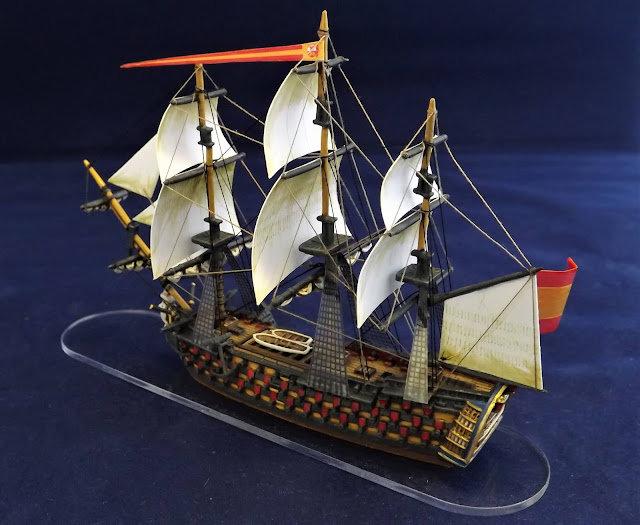 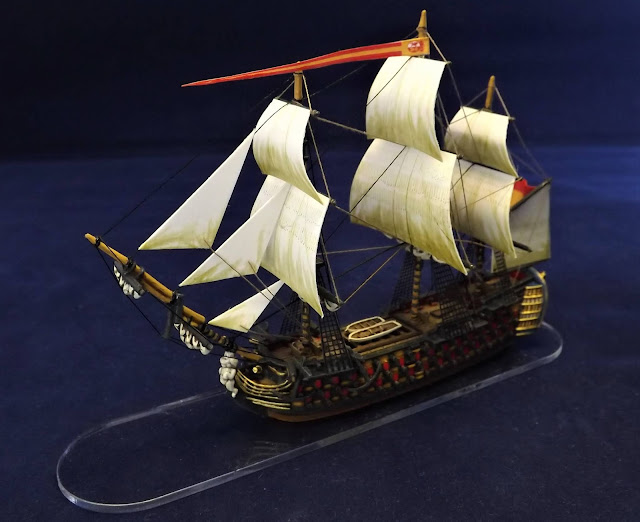 As for the Spanish third rates, their line up include two 80's and one 64-gunner as at Trafalgar thus leaving me a requirement to add a further nine 74's to the eight built. 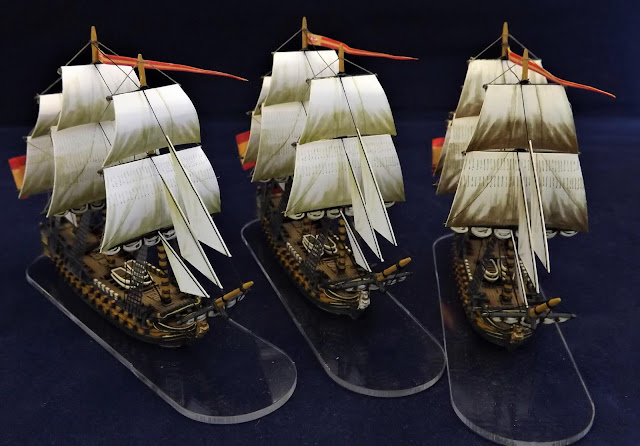 As mentioned above I intend that these eventual nine models, with the first three seen here, will have a Revolutionary War look and given that they are designed to be generic just with added variations to their paintwork around the bow, stern-galleries and bulwarks. 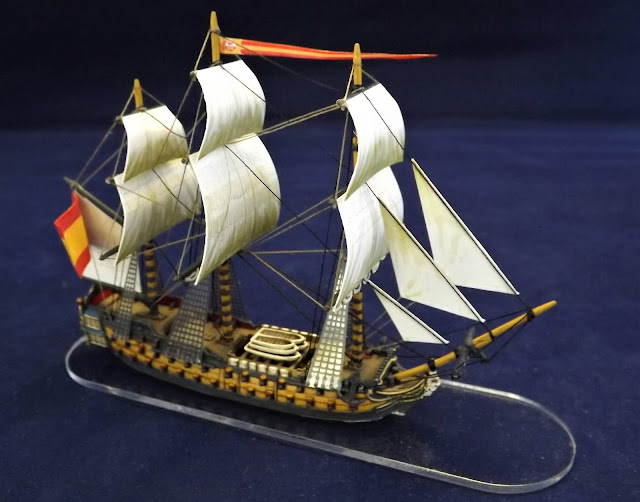 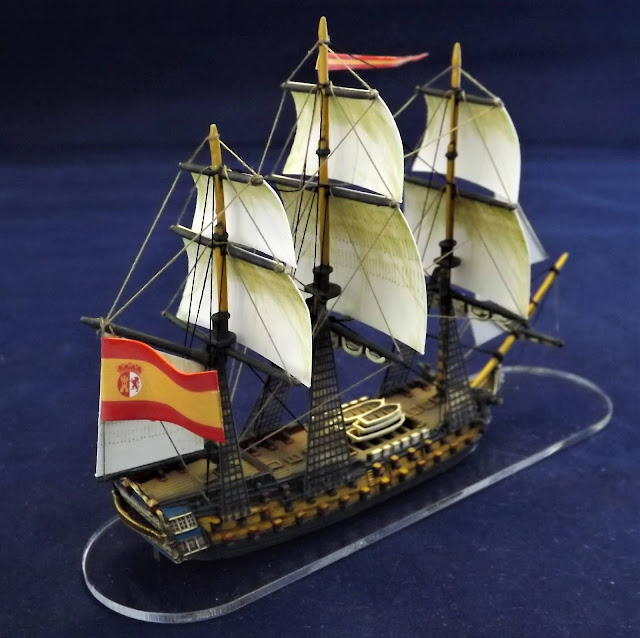 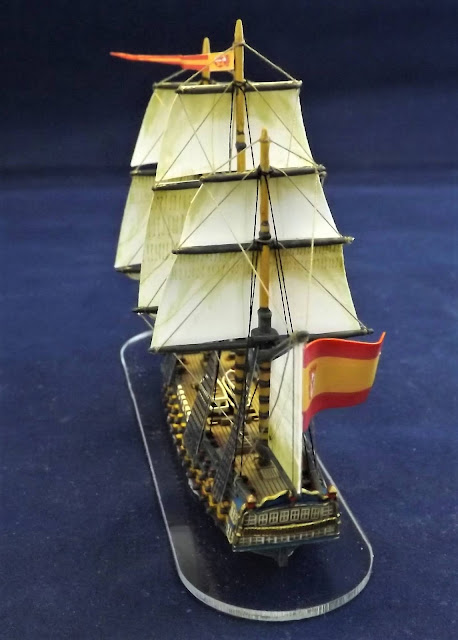 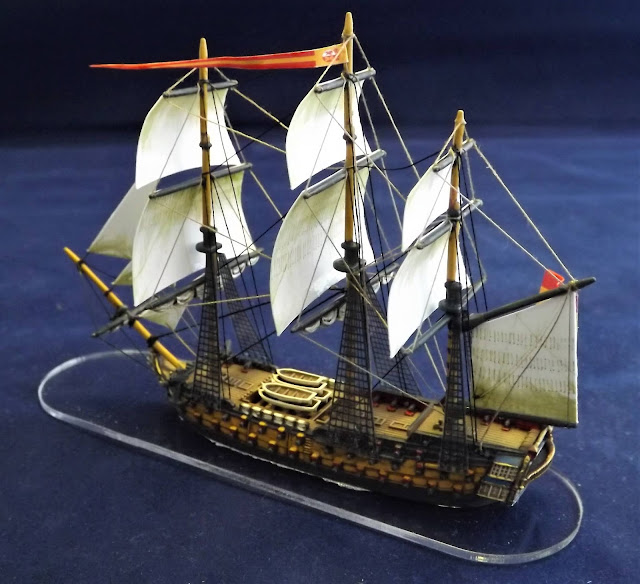 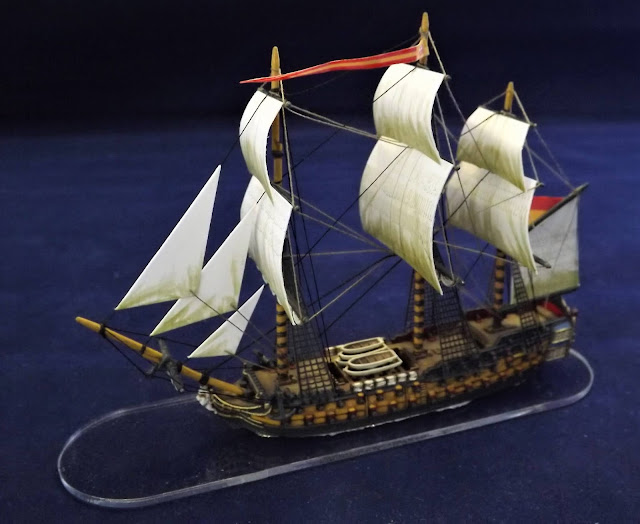 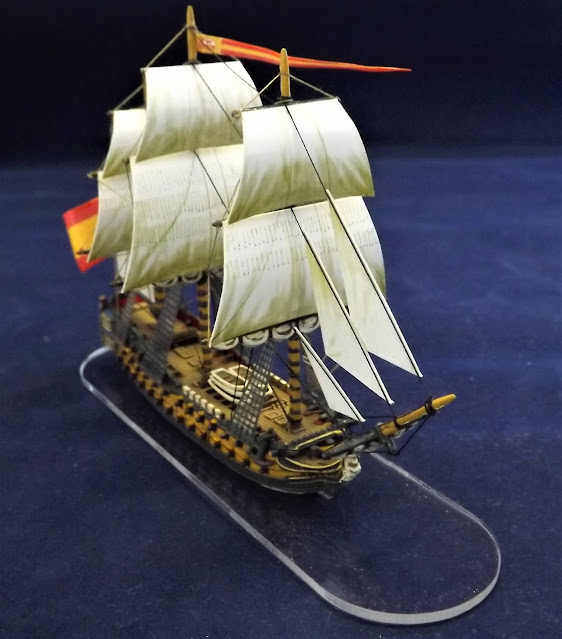 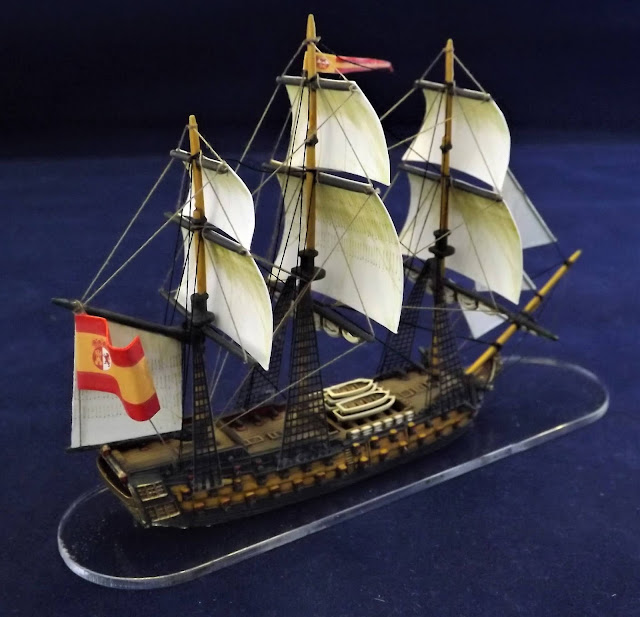 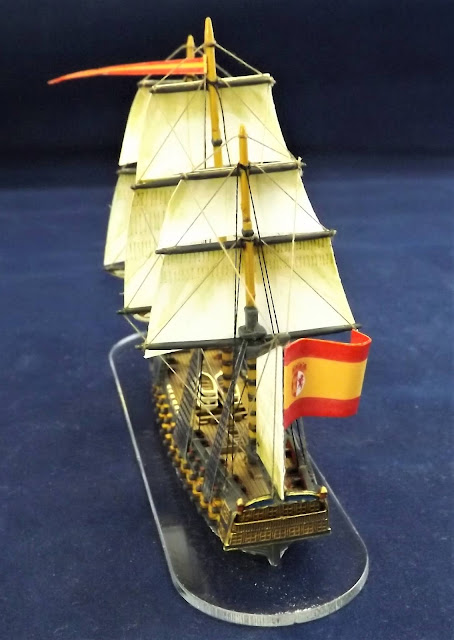 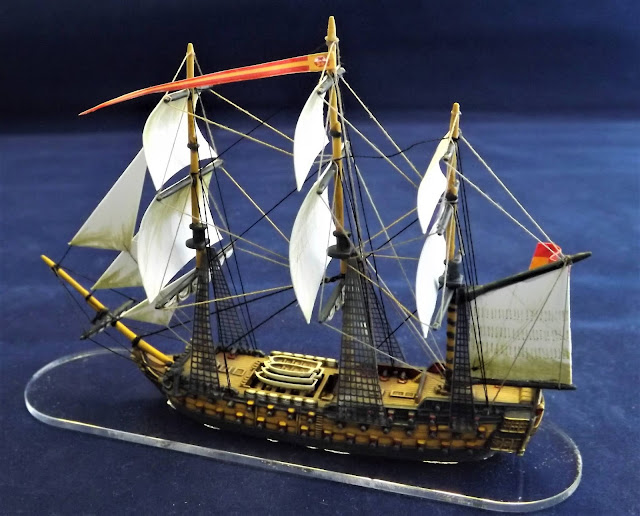 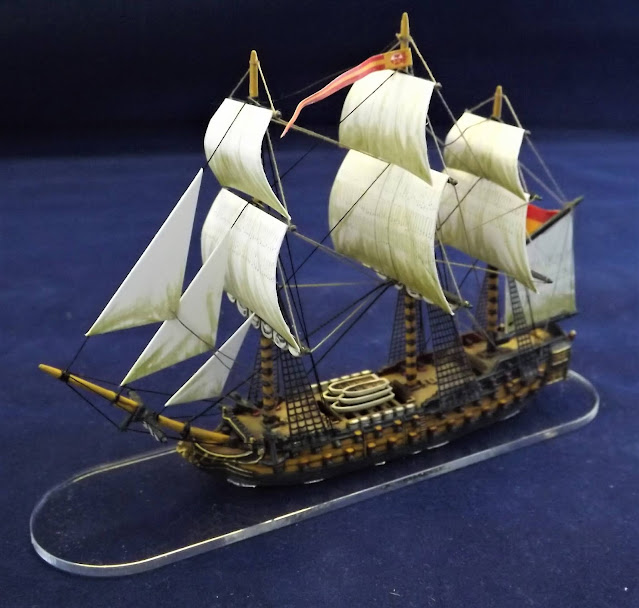 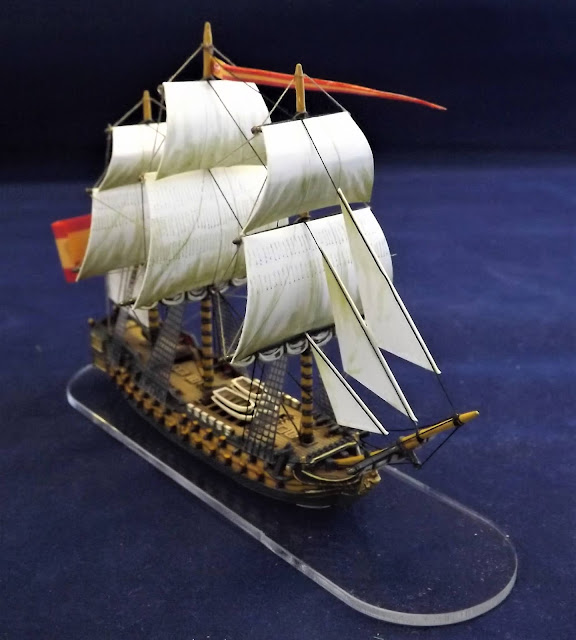 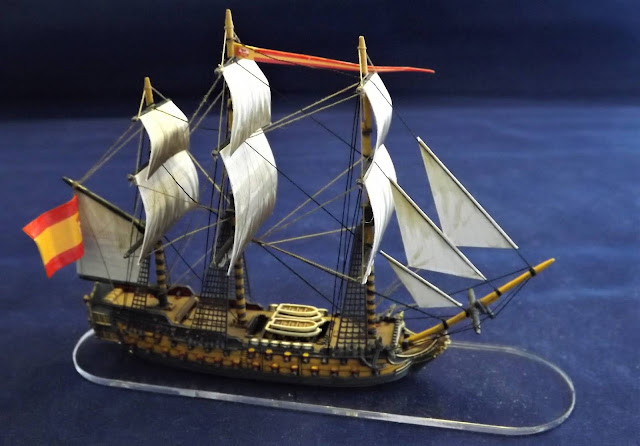 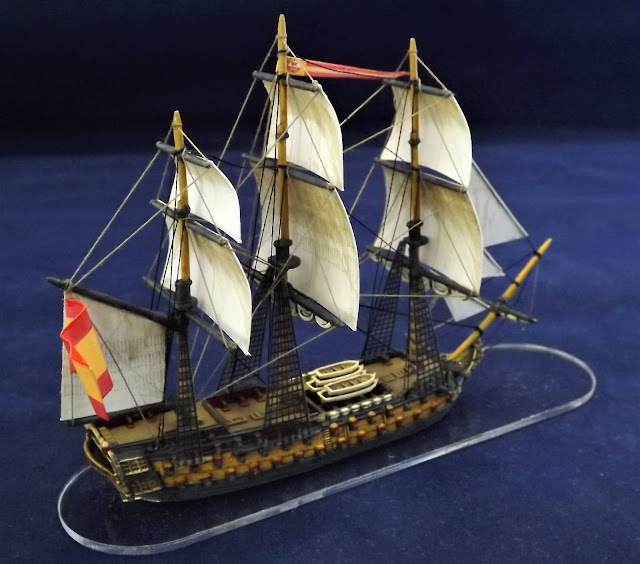 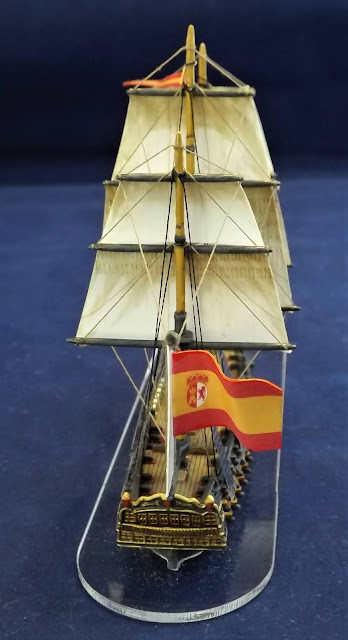 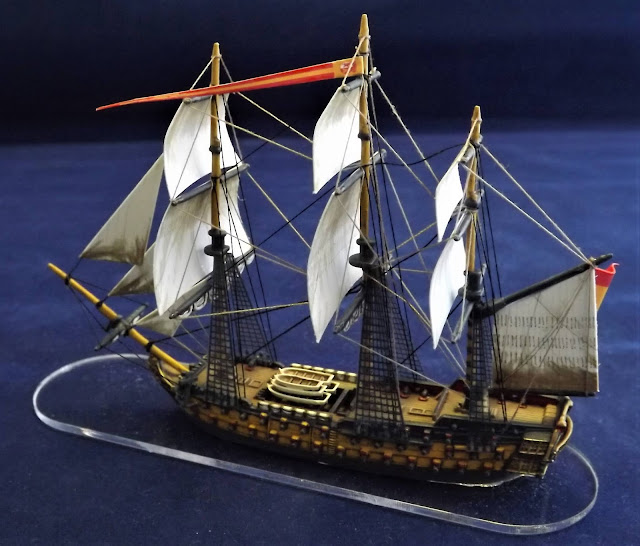 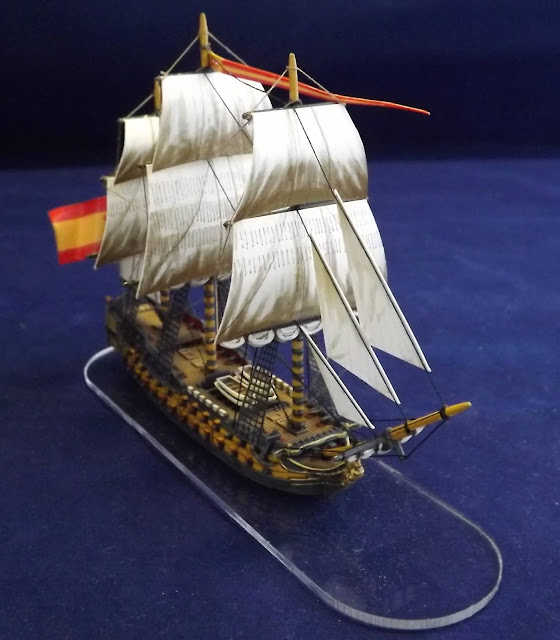