All at Sea - Trafalgar Battle Planning 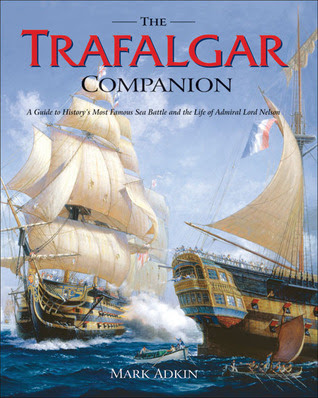 Thus the set-up arrived at is as you see it based on the appreciation of these facts presented by Adkins in the Trafalgar Companion with a copy of his map I started to plan around based on the game scale of one inch to twenty-five yards or roughly six feet to the mile, and I have set the fleets up as the Allied fleet opens fire at 11.45am on the 21st October 1805.
The Adkin's map provides a good basis for a set up plan and even shows the Allied vessels that started the battle, marked as opening fire, however I needed to translate the set up into tables that would allow access to the models constrained as always by the length of the average human arm and to decide on the separation between the ships which I have set at around four to six inches or one-hundred to one-hundred and fifty yards, which is likely to open up as the Spanish find it difficult to maintain their station (as covered in Kiss Me Hardy)
Once the table plan was sorted out I needed to translate it to the table to make sure what my mind was seeing was realistic, particularly with the deployment of the Combined Fleet which is where the fighting will take place, given that they are moving slowly into a bow wind.
Thus you can see in the plan below and how the fleet will be distributed across three tables and in relation to the approach of the first British ships set up in echelon for Collingwood's Lee Column and in column and arriving later for Nelson's Weather Column.

An important aspect of the Combined Fleet set up was to make sure the line was spread out sufficiently within the scale distance that captures the gaps between its individual ships that the British exploited to pass between them.
In Kiss Me Hardy the Spanish will find it difficult to maintain their station and other gaps are likely to open up just as quickly as the more able French ships look to close them with not much scope for any rapid adjustments sailing into a bow wind. Likewise the British will have no such constraint's with plenty of movement options and the ability to maintain station and likely arrive in groups of ships able to support one another. 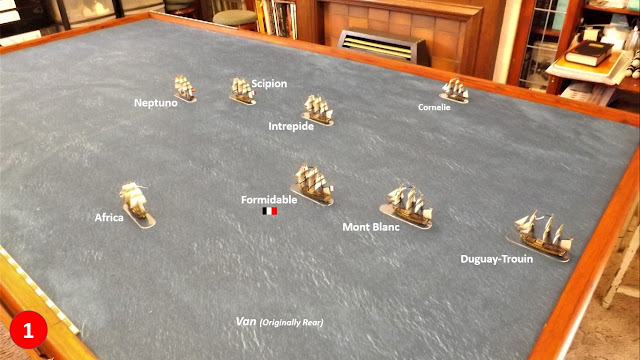 In reality the Combined Fleet set up will be one long line of models spread over twenty-three feet of table and these three pictures attempt to show the arrangement organised over my nine foot table broken into the three parts as illustrated on the planner.
The only gap in the tables will be that between the British approach tables and the Combined Fleet set up tables with British ships arriving on the latter transferred from one to the other as needed. Thus HMS Africa is shown running down the line of the Allied van and Collingwood's Royal Sovereign will likely come onto the table in front of the Allied rear sometime in the opening turn. 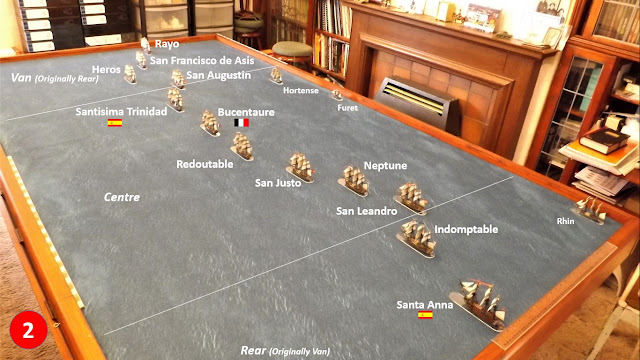 With the set up sorted I am now looking at the other scenario conditions principally around the parameters set up in the Too Fat Lardies scenario plan from 2005 but with adjustments to look at squadron and fleet morale as a whole.
Wargamers tend to ask their land and naval warriors to fight on far longer than their historical counterparts, willing to accept ridiculously higher casualties that would have been the case in reality.
From the accounts of the battle, this break point becomes obvious after about a couple of hours of close fighting with Allied ships starting to drift away from the action leaving comrades on the wrong side of the British line to their fate. Obviously when this becomes more general the battle dies down providing the break point where those that can, get away off table, and also providing a sense check for the players to see if the game continues or is called with outcomes assessed. 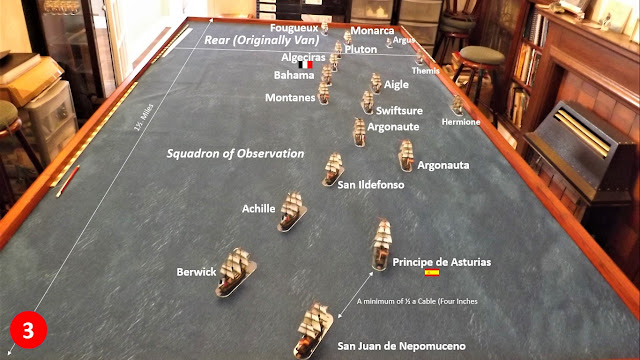 So there we are, the fleets are built, the game plan is set up, the storage and carriage boxes are organised and, as I write this post, the additional sea mats have arrived, so now we just need to sort out the time and the venue. England Expects!
Next up, I have a book review from the War of 1812, and the Spanish and French are joined by reinforcements in the form of another three Spanish 74's kitted out for Cape St Vincent and the French with the mighty L'Orient ready for her trip to the Nile.
In addition Carolyn and I are off on our first trip away after a very long winter of lockdown and headed to Shrewsbury, the Welsh borders and North Wales for a few days, so I hope to capture a look at some interesting places while we are away.
Posted by carojon at 00:54