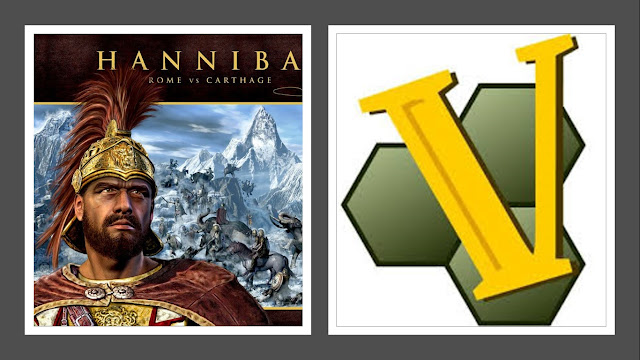 Picking up from my post in March
https://jjwargames.blogspot.com/2021/03/hannibal-rome-vs-carthage-on-vassal.html
Steve and I carried on with eventually two games of Hannibal at the end of which we both felt we had a good feel for the game mechanics and best play, given that the beauty of Card Driven Games (CDG's) is that you can never really come up with specific game strategies and approaches because the games can be quite different one to another based on the cards you end up getting to play.
This post report was certainly more of a challenge than previous ones because this Vassal module rather uniquely doesn't have a screen capture button to allow a record of play to be easily grabbed, so I ended up resigning myself to manually taking screen captures from saved game stages to try and illustrate how our two games ended up.
So to summarise:
Below is the map of our first game that ended up with a crushing victory to Steve playing Carthage ending with 13 provinces controlled to Rome's 5.
Steve played a canny game, storming into Italy with Hannibal and managing to bring most of his army plus two elephants and capitalising on P.Scipio's disastrous early attempt to invade Spain as I fumbled my way through the early moves trying to work out how this game worked.
Once Hannibal was established in the northern provinces of Italy he contented himself just to being a force in being, tying down Roman forces and generals whilst revolts broke out in Syracuse, Sicily and Corsica, which required Roman expeditions to crush and deposit the odd garrison to prevent further trouble and incursions from other Carthaginian generals.
Rome managed a brief resurgence in the middle years prior to Scipio Africanus turning up but Carthage managed to maintain its lead and then with Scipio A making heavy weather of progress in North Africa proceeded to support Hannibal with other forces that started to eat in to Italy.
Scipio A managed to beat up the Carthaginians in North Africa and get before an empty Carthage in the last year of the war but didn't have the cards or time to successfully lay siege and take the place to offset the lead that Carthage had grabbed in captured provinces. 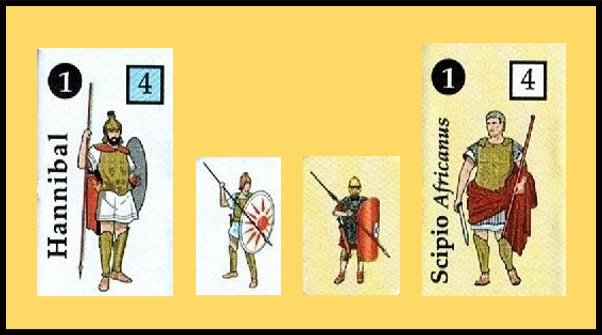 Soundly chastened by my thrashing, Steve and I changed sides and I took Carthage for our second game which given the lessons learnt meant both of us were playing a better game and now just needed the right cards at the right time to put that learning to good use.
Thus Steve immediately rushed garrisons up to the passes in the Italian Alps to block Hannibal looking to do a similar job as in the first game. The plan worked and as Hannibal cautiously working his way through Liguria, Steve whacked him with several cards that saw half his army dead and all the elephants gone before he had to turn and face a Roman landing force in his rear that defeated the remnants of his army and saw Hannibal fleeing to Spain.
Carthage came back though, defeating two Roman ten point armies in Massilia and in Cisalpine Gaul as Hannibal regrouped and came charging back towards the Alps, this time penetrating into Italy.
Rome then turned its attentions to Sicily, or more precisely Syracuse which revolted and saw a large Roman army before its walls that spent a year laying siege to no avail and ending up decimated as Carthaginian cards repelled siege points and wore down the Roman force.
The final game was a close run thing with very rarely more than two provinces in it and with Scipio A making his move against North Africa all to play for in the final years of the war as Hannibal tied down Rome's forces in Italy with a large army and siege train threatening Rome.
In the end Rome came out on top with one province in it, as Carthage reduced Scipio to just control of Western Numidia but not enough cards left to reoccupy Eastern Numidia.

So Steve came out on top in both games. Well played mate.
We both really enjoyed Hannibal and this game is up there with our other top CDG's such as Mr Maddison's War which both of us would play at the drop of a hat. The cards really challenge the players to make the best of the situation they face, never being fully in control as 'events, dear boy, events', to quote a famous British prime minister, keep cropping up and need to be dealt with as you try to win a war - great stuff!
This Vassal module played ok but if the designer feels inclined, the addition of a screen grab button would be a useful update.
Next up, Steve and I are back in WWII North Africa as we reacquaint ourselves with an old favourite with a rather unique hidden movement system, the 1984 game from Frank Chadwick and Games Design Workshop, 8th Army: Operation Crusader, more anon.
Before that though I will be taking a look at the Trafalgar game planning, following up on my previous post that looked at terrain and storage. Then I hope to have some pictures and a post of my first trip away since the second lockdown as Carolyn and I take a break up to Shrewsbury and North Wales and enjoy our new found freedoms!
Posted by carojon at 23:39