As part of my homework and general amusement in recent months as I have put together my Napoleonic collection I have read several books pertinent to the subject, namely "To War with Wellington" by Peter Snow, "The Man who broke Napoleon's Codes" by Mark Urban, "Wellington in the Peninsula" by Jac Weller, "Albuera 1811" by Guy Dempsey and "Talavera" by A Field. 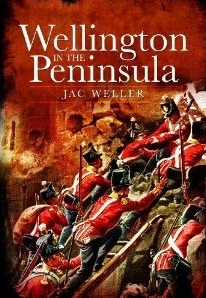 I have had this book on my list to read ever since I saw a library copy in the late 70s when information about this period of history was hard to come by. I finally had a copy bought for my birthday by my wife and have just finished reading it. Jac Weller first published this book in 1962 and the thoughts and opinions expressed have a strong influence of Sir Charles Oman throughout. Though rather dated by today's standards the book is well written and gives a gripping account of the battles fought by Wellington in this war from Rolica to Toulouse. There is a description of the British and French army's, their tactics and organisation. Order of battle summaries, mainly taken from Oman, follow each chapter. Interspersed throughout are black and white photos of key points of the battlefields taken by Weller as he followed in Wellingtons footsteps. The accounts give a good feel of the sequence of events during each battle and the events that led up to them, but the description of British methods reveal the age of this book by constantly referring to the British line's superior number of muskets delivering crushing volleys against the oncoming French columns, quoting the number of muskets being able to fire and the rate of fire being the deciding factors. This is not the modern view that following the musket volley it was the rousing cheer followed by a charge with levelled bayonets that actually caused the shaken French columns to reel back in disorder. The classic example of this being Albuera where Wellington was not in command but where British infantry did not follow the tactical model and instead of charging following the initial volley, sat back and ended up trading volleys with the French columns to their front. This caused one of the bloodiest exchanges of musketry in the Napoleonic period. Ironically the collapse of French resistance came when the Fusilier brigade resorted to traditional tactics by delivering a crushing volley and followed it up with the bayonet. However if you are happy to allow for this minor quibble as I was, I think this book is a good read for anyone interested in the period and gives a good study of the Army under Wellington and its battles. 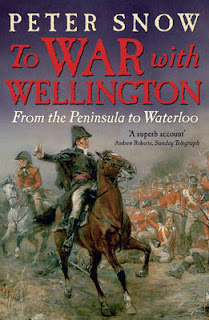 I picked this book up as a bit of light reading during my 2012 summer holiday. I really enjoyed this book, and I wasn't sure I would when I saw who the author was. Because it was Peter Snow I would have put this book in the general reader interested in the period category, but to my surprise it is packed with interesting anecdotes and facts for the Napoleonic student. The book seeks to cover a lot of information, looking at Wellington the man, his battles and campaigns, his generals and giving some insight into the men he commanded with first hand accounts describing key events. There are maps illustrating each of the battles together with portraits of the people involved in the events described together with pictures of the troops on campaign and in battle. As I say I found this book a very enjoyable read with information I hadn't seen before. 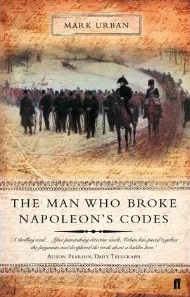 I've had this book on my shelf for a few years now, and took this one on holiday as well. I knew about Sir George Scovell from my collection of Sir Charles Oman's History of the Peninsula War in seven volumes, where in one of the volumes there is a description of the captured messages and the translation done by Scovell. This book though is a must read for anyone interested in the intelligence war that went on during Wellington's fight with the French.

Mark Urban who will be familiar to viewers of BBCs Newsnight is a well known political journalist who happens to have an interest in the Napoleonic period. He brings his journalists eye to Sir George Scovells papers that have survived the years and include many captured French messages and his notes on how he set about cracking the French codes. He then weaves the story of Scovells arrival in the Peninsular, his struggles for promotion and recognition. He describes the snobbish attitude that Wellington showed to any officer not from the right background, particularly one who was educated and dedicated to the military as a professional officer. It was these kind of people who had joined with Napoleon to cause the revolution in France, and Wellington was certainly not going to encourage those sorts in his army. Despite the prejudice from above Scovell had his supporters in Wellington's staff and the great general came to rely on the intelligence that he received from his senior intelligence officer, and as Scovell's skill developed together with the network of intelligence gatherers, spys and guerrillas, the insight into French plans and operations became very accurate. This ability was to allow Wellington to be able to predict French responses to his movements and became invaluable during his later battles from Salamanca onwards. 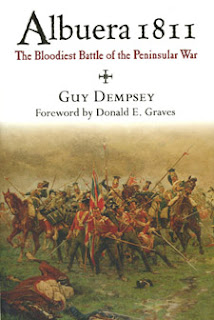 Talking about must reads, I was lent this book early in the year by a fellow Peninsular War enthusiast, thanks Ian, and I was going to write a review describing what a brilliant read this was packed full of data and new insights to a poorly recorded and understood battle when I came across this review by Anthony Gray on the Napoleon Series site. Check it out as it says pretty much everything you need to know, then get the book and read it, you wont be disappointed. 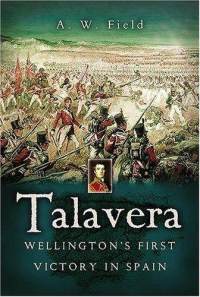 And finally but by no means least another great book was added to the library this year when I picked up a copy of Talavera by A W Field.
To quote the back cover
Well I felt it did everything it said on the box and more as I found the style of the book engaging and had me wanting to read on chapter to chapter. This book is packed full of maps, orbats, battlefield photos with a tour of the battlefield at the end. Again if you haven't read this, you really should.

Well there you are, some ideas for some Xmas reading from Santa
Posted by carojon at 01:45