In line with starting to wargame classic Peninsular War scenarios, I am thinking about the first battle that involved the future Duke of Wellington, Rolica, which in the panoply of Napoleonic battles is better described as a rearguard skirmish, but never the less gave the French their first contact with the Allied forces (British and Portuguese) under the command of Sir Arthur Wellesley. 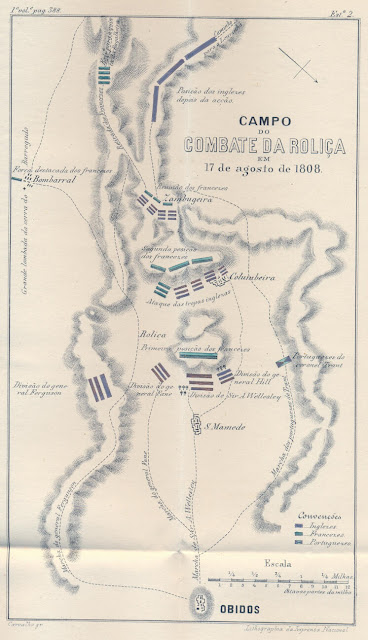 Interestingly, this is a battle where Wellesley, a commander strongly associated with the classic defence, showed, as he would often do, that he was also a very capable offencive commander and set about giving the veterans of Austerlitz, Jena and Auerstadt a lesson in what well led troops using "outdated" linear tactics could do to the new French system. The battle of Rolica, on a small scale, was a warning to later French commanders such as Marmont and Joseph that Wellesley was a very capable opponent on the attack, and in deed it is interesting looking at Salamanca and Vittoria with Rolica in mind.
﻿﻿
﻿
﻿

An interesting quote that helps illustrate Wellesley's thinking at this time comes from a conversation he had with a friend just prior to taking up his new command. When asked about his thoughts, he replied

"Why, to say the truth, I am thinking of the French that I am going to fight. I have not seen them since the campaign in Flanders, when they were capital soldiers, and a dozen years under Bonaparte must have made them better still..... My die is cast; they may overwhelm me, but I don't think they will out-manoeuvre me. First, because I am not afraid of them, as everybody else seems to be; and secondly because if what I hear of their system of manoeuvre is true, I think it is a false one against steady troops. I suspect all the continental armies were more than half-beaten before the battle was begun. I, at least, will not be frightened before-hand."

So to the battle:
Sir Arthur Wellesley and his army of about 10,000 men landed in Portugal in Mondego Bay close to the fortress of Figueira on the 1st of August 1808, and was fully assembled on shore by the 5th. In the following three days he was joined by a further 5,000 men under Major General Sir Brent Spencer from Cadiz. The total force was on the road to Lisbon by the 10th of August staying close to the coast to remain in contact with the Navy.
﻿

When the French commander General Junot heard of the landing he sent one of his best commanders General DeLaborde, to delay him until reinforcements could arrive from Abrantes. The two forces made contact on the 15th August with a brief skirmish at Alcobaca. On the 16th August Wellesley's troops occupied Obidos and the next morning he observed that DeLaborde had occupied a defencive position just to the north of Rolica, some four miles beyond Obidos, with a small force of about 4,500 men.

General Delaborde was a very capable commander who would continue to enjoy the Emperor's favour in the years to come, eventually commanding elements of the Young Guard. The Rolica valley offered terrain advantages to offset his lack of numbers, he had been ordered to cover both Generals Loison and Junot's approach march and expected reinforcements. Assuming they were near, any further withdrawal might imperil his commanders strategy, and so a delaying action would allow him to fulfil his orders and test the determination of this British commander. Perhaps if he could cause sufficient casualties these British might scuttle back to their boats.

Sir Arthur also had his mission in mind. He was aware that DeLaborde had potential reinforcements in the area but was unclear as to where they might be. He also new that a further reinforcement of two brigades were set to land and reinforce his command and that he needed to move south and close with the coast to cover that landing as quickly as possible. He was thus set on a plan of manoeuvre to force the French from their defences and potentially destroy them in an envelopment battle. He decided to attack without delay and dividing his command into three columns, tried to outflank the French.
General DeLaborde saw through this manoeuvre and skillfully withdrew to a much stronger position on a steep ridge about a mile south of Rolica.

Wellesley repeated the manoeuvre, but his plan went awry when one battalion the 29th attacked the enemy centre prematurely and he was forced to launch a full attack to support them.The French resistance collapsed under the pressure and by the late afternoon they were in full retreat southwards having lost 600 men and three guns. British losses were about 480 men.

So how to capture these events in a scenario that challenges both the attacker and defender. When you first consider an action like Rolica, the very one sided nature of the battle might cause many wargamers to turn away. However given the challenges and objectives that both Wellesley and DeLaborde faced with the time constraints imposed upon them, we have the basis of a scenario that forces the wargamers to think about similar issues that faced their historical counterparts whilst they attempt to replicate or improve upon the results achieved on the day.

My thoughts have the British on table force in three columns. They outnumber the French rearguard by about 2:1. Given that the ratio was more like 3:1 this would allow for the off table flank marches that were happening. The British objective is to break the French with a force morale failure within a time limit. The French simply need to stay on the table in good order for that given time. The time set could have some variability to allow for the effectiveness or not of the off table flank marches. I have already written this up with the force orbats which I am planning to play test next month.

Aspects I have considered but not decided upon are:
In the meantime I would welcome your thoughts and comments.