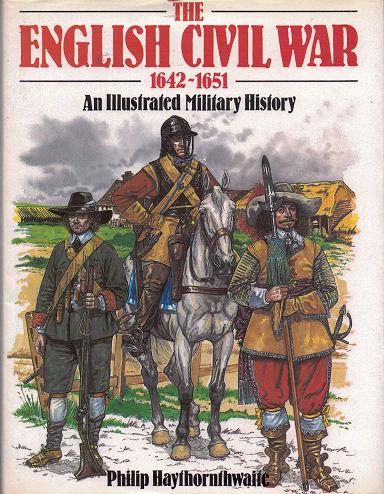 In my series of posts last month covering our weekend trip to Oxford and the local sites I mentioned that as part of my look at Edgehill and Cropredy Bridge, having certain books in hand to reference the history about those battles.

One such book is one I have had on my bookshelf for a good few years now, but one I had always dipped into but never read cover to cover. However with our trip planned I felt compelled to do so and thought I would share my thoughts about it.

My copy of 'The English Civil War' is a first edition from 1983 and I see from looking at the references to it on the net that it has been reprinted several times which I think illustrates its value as over the years since it was first published.

If I were to characterise the contents, it reads rather like a substantial Osprey title with a text that takes the reader through the politics and history of events that cover the first, second and third civil war with an analysis of the politics that lead up to the outbreak of hostilities, the organisation and tactics of the armies together with, the highlight of the book, the colour illustrations based on artwork and descriptions from contemporary work.

The colour plates of which there are eighty illustrations of troop types from the period together with thirteen examples of colours carried by infantry and cavalry are great inspiration and reference for the wargamer/painter and the text is lavishly illustrated with black and white illustrations, photographs of surviving arms and armour and contemporary maps of the various key battles.

This book is intended, and I think fulfils the role, as a solid base reference for the war, which from comments on other sites seems to have stood the test of time. As with an Osprey title you will need to read further books with greater substance to gain a deeper understanding of the events described.

If I were to fault the book it would centre around a lack of good battle maps and in the first edition copy I have, Edgehill doesn't have a title to it, although as my post on the battlefield illustrated our understanding of the layout for that battle has changed with the information gleaned from modern archaeological techniques.

So in summary, despite the age of this tome, it is still a very handy reference to have and one that would appear to be still obtainable second hand for about a tenner.