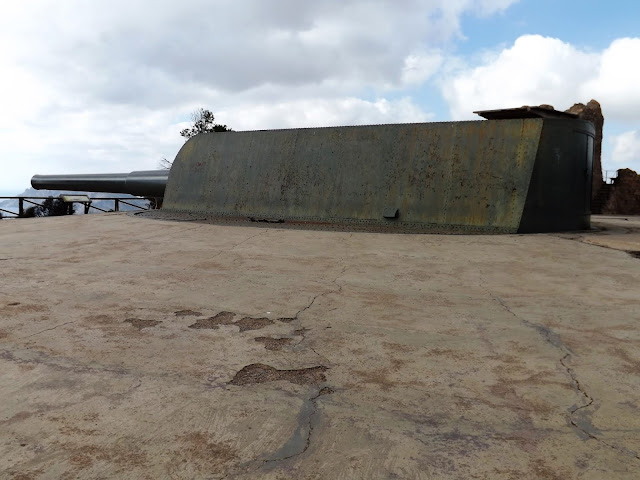 It's that time of year when Carolyn and I often jump on a plane and fly down to our place on the Costa Calida or 'Warm Coast' and that name rather gives a clue as to why.

Don't get me wrong, I love seeing the seasons change here in dear 'Old Blighty', and we don't get the harsh winters in the south-west that other parts of the UK have to endure, but this time of the year in southern Spain is more like early English spring weather and a week of it just seems to break up an English winter.


So during our week away Carolyn and I decided to explore a bit more and try to find places we haven't done before and I was amazed to find that despite coming to this part of Spain for the last eighteen years I had completely missed checking out the coastal batteries that were constructed in the early 1930's to protect the Spanish naval base of Cartagena.


The Bateria de Cenizas is only about a thirty minute drive from our place but lies on a part of the coast that we had never really explored before, with mountains and cliffs rising up from the Mar Menor and La Manga Strip, fronting up to the sea before the bay, next along, opens up into the mouth that forms the entrance to the harbour of Cartagena.


Following the coast road out from the Mar Menor we found ourselves driving up into the hills that soon become very rocky and sparse once you leave the manicured slopes that form the famous La Manga Golf Resort.


Parking the car nearby to the flint road that is the old military road leading over two intervening small mountains, we grabbed a rucksack with water and a picnic and headed up the three kilometer climb to the site.


The old road is a tortuous zig-zag climb leading up to the seaward side of the last mountain and the Head of Ashes which is what Cenizas means in English.

Coming around the corner on the first part of the climb we discovered this tunnel which I suspect formed a reserve ammunition magazine for easy access to trucks bringing up the ammunition.


The route up is quite busy even at this time of the year with walkers coming up and going down trying to avoid getting taken out by mountain bikers relishing the downward trip at speed.


It takes about forty minutes to get to the top and on rounding the last corner one is greeted by the remarkable art-deco style gates to the battery with the guardhouse on the left and an appropriately shell shaped sentry shelter on the right.


The gate is a distinct throw back to the early twentieth century and postmodernist art themes characterised by the likes of Picasso with this gate inspired by the Chichen Itza ruins and the Temple of Warriors where can be seen the feathered serpent heads depicted at the foot of each of the gate pillars.

Period photographs on the information board close by help give a sense of how this entrance might have looked during its time as an active military base and a quick search on the web reveals pictures of the khaki clad troops who served the guns in the period leading up to and including the Spanish Civil War.


The site was a former 19th century gun position but work on the modern position was part of the  'Defence Plan 1926' for the protection of the naval bases at El Ferrol, Port Mahon and Cartagena, with work commencing on February 16th 1929 under the direction of Captain of Engineers, Angel Ruiz Atencia and not completed until December 1932.


The position was developed to include two below ground level magazines with personnel accommodation blocks positioned on the back slope of the mountain and dug in concreted barbettes for two turreted, single mount, 15 inch Vickers-Armstrong 1923 model naval guns with the ammunition hoists and diesel engine drive mechanisms securely placed deep within the mountain-side. 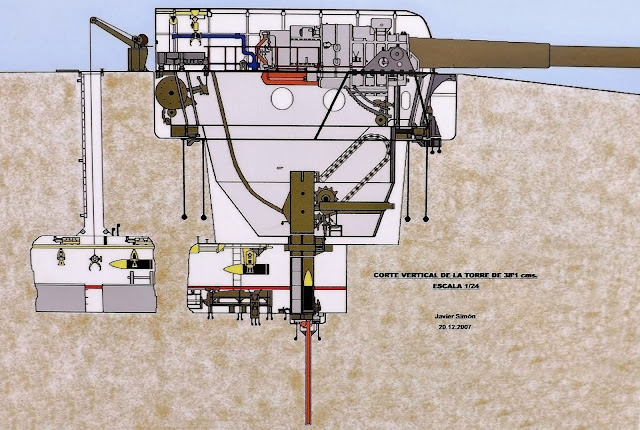 The guns were built in Sheffield, part of an eighteen gun order placed by the Spanish government, and were transported from Barrow on the cargo ship Brompton Manor arriving in Portman Bay on 7th June 1930 where, after a period of bad weather that delayed the unloading process, they were eventually brought ashore for transporting up the mountain on a specially constructed light railway and towed up it by a steam locomotive nick-named 'La Corturela'. 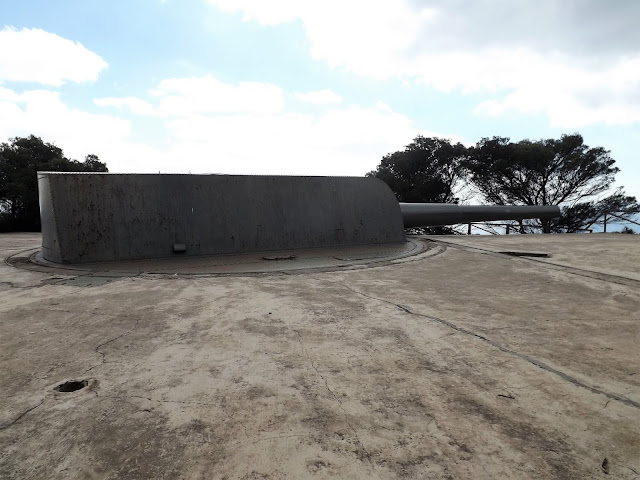 The guns and their mountings struck me as almost identical to the ones I had seen back in 2005, built to protect Singapore and also reminded me of the pictures of the Dover battery used to fire at German positions and shipping in the channel during WWII.

As you can see they are fully encased in a steel gun house designed to protect the crew from shell splinters but not thick enough to resist a direct hit. 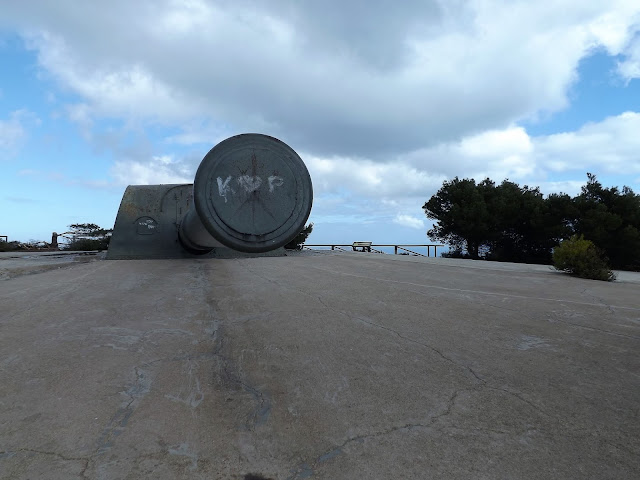 The guns are quoted as being just short of fifty-eight feet in length and weigh eighty-six tons, firing shells weighing in at 1,885 lbs requiring a 474 lb charge to launch them. The range is quoted at twenty-two miles and a well trained crew could be capable of firing two shells a minute. 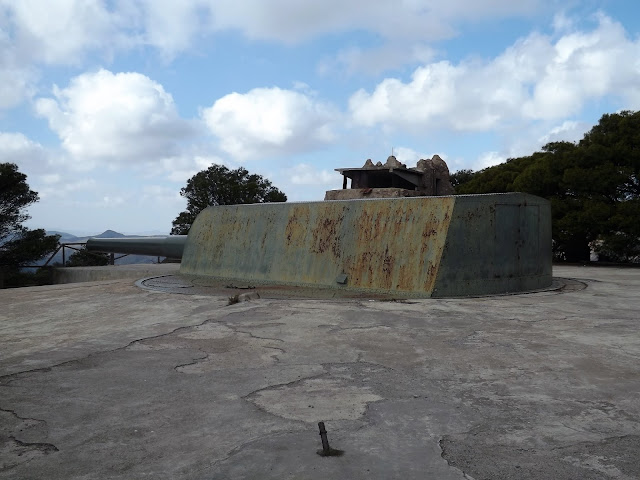 These guns were set up in 1934 and carried out their first test fire on May 28th of that year and together with the Bateria Castillitos were so positioned to be able to interdict the sea area in front of Cartagena. 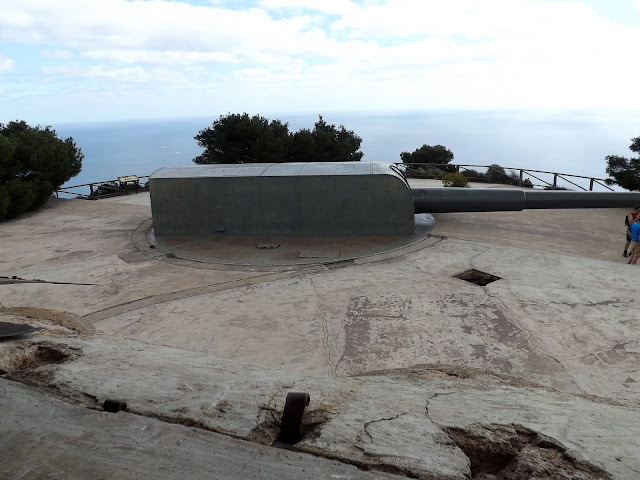 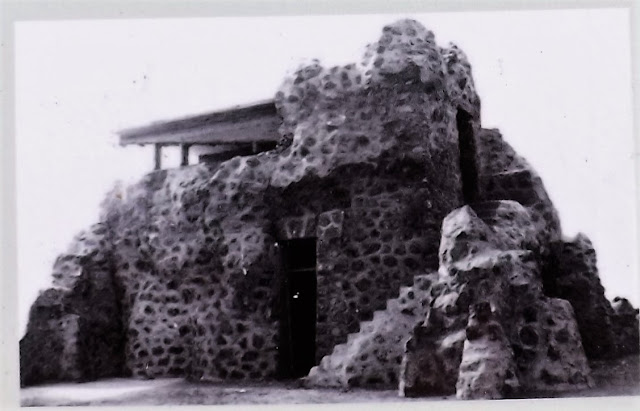 Each gun was supported by an observation platform built using the local rock in various shapes and sizes designed to add a modicum of camouflage to the buildings and with lookout positions enclosed with armoured anti-splinter screens. 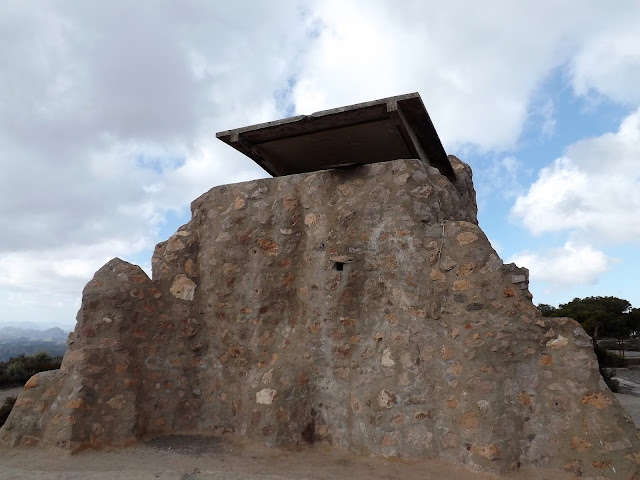 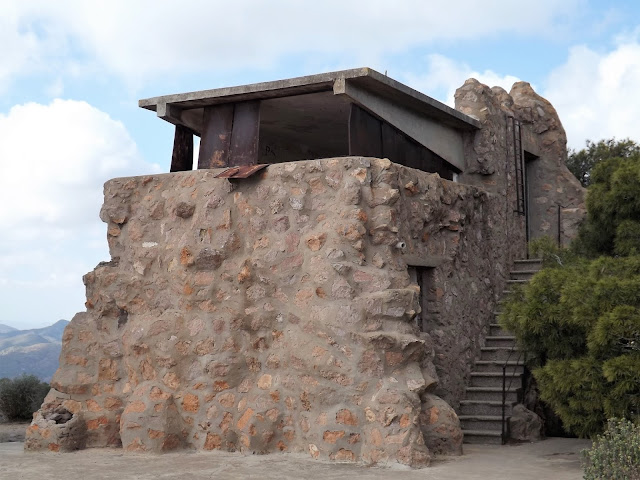 Beneath each of the observation platforms were two rooms likely designed to house the personnel manning the range finding calculator using the data from the range finders above and then transmitting it to the gun captains in the turrets. 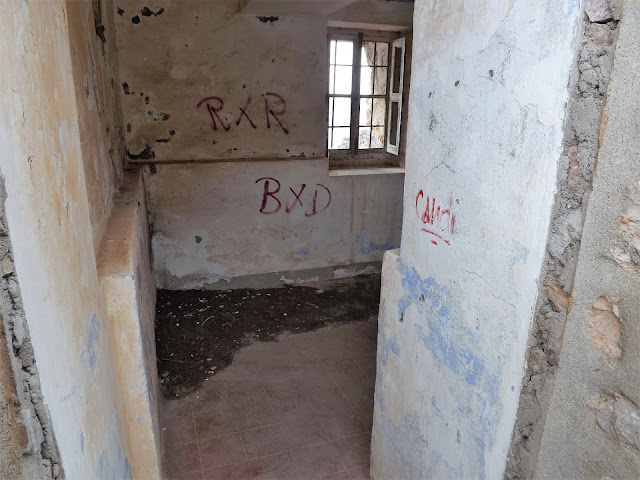 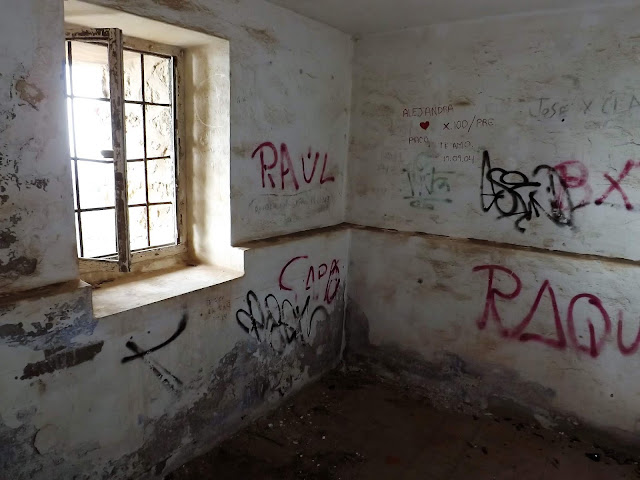 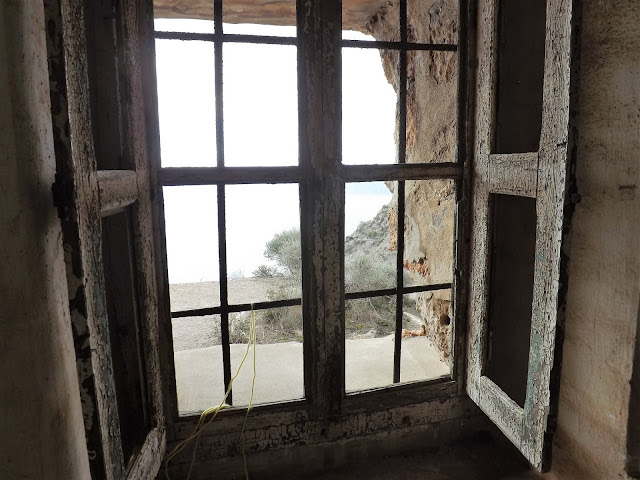 To the rear of the guns and observation platforms were the below-ground forward magazines and further back the accommodation blocks for the garrison.

Shells brought forward to the on site magazines would be be brought in on light rail trolleys via these tunnel encased entrances, seen below, leading to the below-ground level magazines.


It would seem that the only time the guns fired in anger was during the Spanish Civil War and right at its conclusion with the Nationalists very much in control of events after the fall of Catalonia in February 1939.


The Republic still controlled the capital and about thirty per cent of the rest of Spanish territory but with over two hundred thousand troops already lost, the resignation of Republican President Manuel Azana and the recognition of the Francoist government by the UK and France, the Republican situation was very bleak.


However hard line communists within the Republic were insistent about continuing the struggle in spite of the warnings coming from the head of their military.

One of the cities that still held out for the Republic was the naval base of Cartagena, but when a new commander for the republic was appointed and sent to assume command on the 3rd March 1939 a rebellion broke out to be supported on the following day by a Nationalist fifth column lead by Colonel Arturo Espa who seized the coastal batteries and radio station putting out requests for support from Nationalist forces to help secure their hold on the city.


On the 5th of March the Nationalist airforce bombed the harbour in Cartagena and sank the Spanish Republican Navy destroyer Sanchez Barcaiztegui leading to the rest of the fleet of three cruisers and eight destroyers setting sail for Bizerte in North Africa where they were interned by the French authorities.


On the 7th March a Republican army brigade arrived in Cartagena and promptly returned the city and its coastal batteries, including Bateria de Cenizas,  back under Republican control, only just arriving ahead of sixteen Nationalist transport ships sent to support the uprising with 20,000 troops aboard.


On hearing that the rebellion had been crushed the Nationalist fleet withdrew, all except one of the ships, SS Castillo de Olite, which headed in towards Portman Bay having failed to pick up the signal to withdraw due to a broken radio set.


The ship, carrying  2,112 men, was fired on by the Cartagena shore batteries and was hit by three shells, breaking in two, with the loss of 1,476 crew and Nationalist soldiers and of the rest, 342 were wounded with 294 taken prisoner after being rescued by local fishermen and the lighthouse keeper.

Sadly within four weeks of this action the war would be over with the surrender of Republican forces on the 1st of April 1939.

The guns fired their last rounds on June 12th 1981 during a firing exercise and the battery continued on in service until 1994 when it was finally decommissioned and left open to the general public.


As mentioned, this and the neighbouring battery at Bateria Castillitos are part of a series of such emplacements built by the Spanish government in the 1930's and you can see some excellent pictures with more information on the design of them with the link below looking at a similar site at Port Mahon in Menorca.

Other stuff to come: Carolyn an I are off to Cartagena a little later this week to check out more of the Roman and Punic remains in the city and I have review of plans for the Romano-Dacian collection going into 2019 together with the wider ancient collection in the longer term.