Battlefields in Devon - Battle of Pinhoe 1001

It was way back in December 2016 that Tom and I walked the last Battlefield in Devon report when I covered the Battle of Torrington in 1646.

The county of Devon has a long and rich history and in the last two millennia armies have come and gone and the countryside often gives little clue as to the bloody combat that has occurred among its pastoral scenery evocative of Tolkien's Shire with its narrow lanes, high hedgerows and hills and valleys, known as combes locally, interlaced with rivers and woods, only adding to the attraction of its beaches for holiday makers coming here each summer season.

The map below shows the extent of the county with its two large open high granite stones moorlands, namely Exmoor and Dartmoor where the springs of the Rivers Dart and Exe find their source. This map also serves to show the fields of battle visited so far and you can follow the links below it to pick up on other sites visited

This next battle site was touched on in a post I did covering some test games of Dux Bellorum, Steve M., Bob and I were running to put together a scenario to be played at the February club meeting of the Devon Wargames Group. 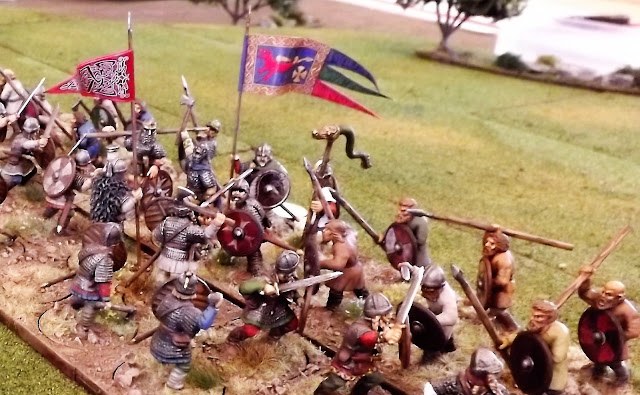 That game has now been played, following three play-tests prior to it, to arrive at a scenario that would capture some of the bloody struggle that occurred on Beacon Hill near Pinhoe, Exeter in 1001 and you can read how our game turned out plus pictures of the action by following the link to the DWG club blog.

This post however adds the final look at this classic Anglo-Saxon versus Viking Raider clash by looking at the battlefield today and a link to the PDF of our Dux Bellorum scenario should you wish to have a go yourself.

I have lost count the number of times I have written or spoken about the insights walking a battle site gives that can't be experienced by simply reading an account of what happened with a description of the key terrain.

Only when you experience how steep Beacon Hill is will you appreciate the 'charging uphill' modifier that I have applied to the Viking force in the Dux Bellorum scenario because I have experienced the effort of walking up it, not as the Vikings, clad in mail, carrying a large axe and shield, but also not having then to charge a formed shield wall on top of it, trust me, it was knackering in 1001 and it still is in 2019.

I described the background to this encounter in my post about the first play-test so here I will focus on my walk and the terrain encountered.


Parking my car close to Pinhoe station on the main line to London I began the steady climb uphill through the village towards the B3181 that forms the main road into and out of the village.

Pinhoe was thoroughly sacked and burned by the Vikings and the village you see today is a mixture of medieval, Victorian and later houses as the village grew up around the railway and the city of Exeter.


Rupert Mathews in his Battlefield Walks book covering Devon, suggests Park Lane as a likely route out from the original settlement that the Vikings took after gathering in the village to eat and prepare to offer battle to the Saxons on the hill above the village.


On climbing the hill one immediately starts to appreciate the commanding views of the wider country together with the landing site of the raiders in the River Exe, forcing the Vikings to attack them rather than leave such a powerful force to threaten their boats and thus progress inland searching for other villages to loot.

It is thought that the current 15th century St Michael's Church was likely built to accommodate the ground on which the Saxon Christian burials were made following the battle and forms a useful reference point when walking up the hill.


The views, once out into the open countryside, are truly awe inspiring and on the day of my walk the clouds parted to let the sun shine through and remove the threat of any further heavy showers.


Despite the sunshine however the previous heavy rain had left the short cross country part of the walk a little more interesting, but with a stout pair of boots on, worth the effort to see the likely site of Kola and Tokesen's bloody little encounter.


Stepping through the 'kissing gate' onto the battlefield presented the view below which, with a lot of the built up areas in the Clyst Valley below imagined as open fields,  has changed little in one thousand years.

The scant report of the battle suggests Tokesen and his men launched themselves immediately uphill when they caught sight of the Saxon line and hit with such ferocity that the first charge settled the affair in favour of the raiders.


That said the Anglo Saxon line put up enough of a fight to be able to break off from the battle and get back to Exeter and cause the raiders to head back to their boats and depart soon after.


There is something quite moving to picture the struggle that occurred on a site particularly when situated in such a beautiful place like Beacon Hill.

I only hope this place survives the hunt for more and more building plots in this part of Devon to allow others in the future to get the experience I was lucky to enjoy on my afternoon walk.

I finished my walk by taking time to look at St Michael's Church which forms an equally pretty backdrop and stands as a memorial to the bravery of the vicar of Pinhoe at the time of the battle who it is reported braved a journey to and from Exeter to deliver extra arrows and other weapons to the hard pressed Saxon army.

Rupert Mathews the author of the book I am using to plan these walks has his own blog and you can read his account of this walk and battle in the link below.

Finally, as promised, you can access the scenario and orders of battle for our Battle of Pinhoe, Dux Bellorum game in the link below.