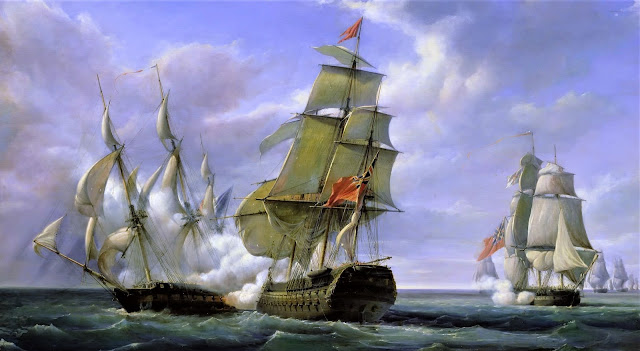 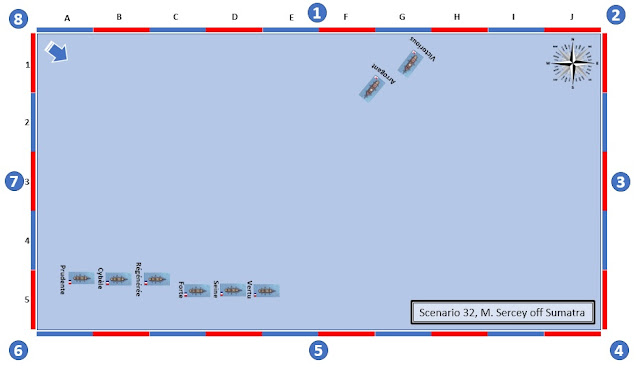 Given the conditions being light to no breezes at all at one stage, I decided to keep the possibility of a change in wind direction, but left out the 'Getting Choppy' chit which if pulled sees the sea swell become such that the two British third-rates would be compelled to close their lower gun-ports which would not have accorded to anything like the situation faced historically and would have no doubt seen the actual action postponed until better conditions had prevailed.

Any scenario writer will know, much like the military maxim, that 'the plan changes on first contact with wargamers!' and that is why it is so important to get to play-test as much as possible to see if you have maximised the environmental and situational drivers to challenge the players similarly to their historical counterparts.
After explaining to the players why the two forces were here and the imperatives placed upon them to win, but not in a Pyrrhic fashion, we diced off for commands with Nathan taking the role of Sercey and Chas upholding the honour of the Royal Navy as Commodore Lucas.
With both players naturally aggressive in their style of play, I observed this encounter with a doubtful eye as to whether either commander would observe the second imperative, and the opening moves only served to reinforce that early impression of likely outcomes as both commands brought their respective squadrons as close to the wind as they could without going 'in irons' and the rather conservative, with a small 'C', Sercey replaced with a 'let's go get em!' version, as Nathan split his line into two columns and sailed to meet the British force mid table.
By sailing close to the wind the inevitable first exchange of fire would be delayed as both forces closed on a bow wind, but with Lucas moving away from the first group of frigates towards the second group, it offered up a chance for the British third rates to close on the second group, whilst leaving the other struggling to come up in support and perhaps defeat of the combined French force in detail.

The chit driven activation used in KMH provided loads of gripping uncertainty, particularly with movement and firing and the order each was carried out in, producing the first close encounter as Arrogant got the drop on the Régénérée, to move across her bows and, in the close encounter generated, seeing the British third rate successfully grapple the frigate as it poured in a point blank bow rake.
The move brought the lead French frigate to a stop, forcing her consorts to take avoiding action and prepare to engage the Victorious, following up in close company.

The final three French frigates are those that struck to the British squadron with only the Seine being recaptured at the close. 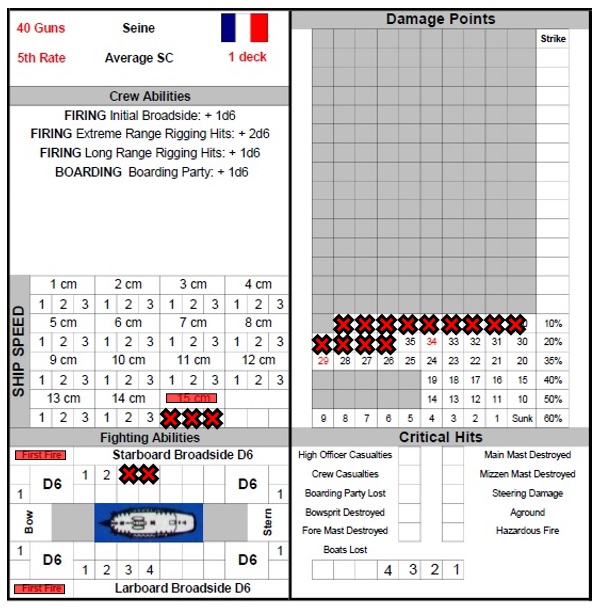 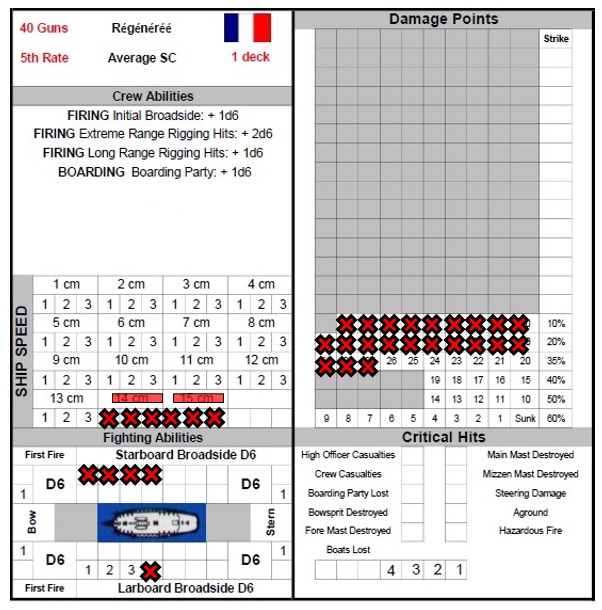 Thank you to both Nathan and Chas for producing a fantastic game that was cut and thrust all the way, with no quarter asked or given, but played in the usual spirit of banter, laughs in equal measure to go with the fun of the game.
Likewise Kiss Me Hardy performed magnificently to produce a fast flowing game with turns proceeding at a good pace and with the ever present uncertainty of the chit driven activation and testing sequence, that had its say many times throughout the game, with its last surprise giving Nathan his opportunity at a double stern rake on the Victorious to set up what seemed like an unlikely French victory.
I now feel confident that this scenario has bag-loads of potential for both players if they choose to be aggressive in their intent, however I'm not sure how either admiralty would have viewed the damage suffered by their respective commands given the scarcity of resources available for this out of the way naval theatre.
For those interested, all the models presented are from the Warlord Games, Black Seas range of Napoleonic era ships all based on my acrylic pill bases supplied by Fluid 3D, follow the link 'All at Sea Ship Bases' in the right hand column under 'Labels', and the sea cloth is from Tiny Wargames, see link, at the top of the right column under the Devon Wargames Group club banner.

I'm off to the Devon Wargames Group monthly meeting today to replay this scenario with another group of players as another warm up for Clotted Lard, so look forward to reporting on the outcome of that game on the club blog.
More anon. JJ
Posted by carojon at 22:42

Email ThisBlogThis!Share to TwitterShare to FacebookShare to Pinterest
Labels: Age of Sail, All at Sea, Kiss Me Hardy, Warlord Games