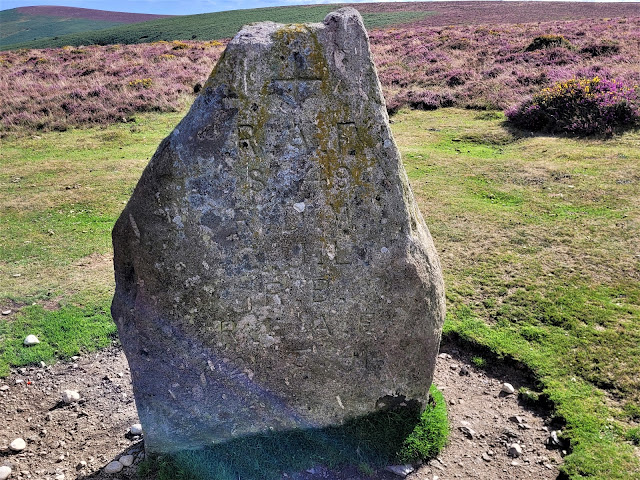 It's that time of year, as the days grow long and sunny, that Carolyn and I yearn to get back out on Dartmoor and about this time last year we were enjoying the delights of Haytor Down and Yarner Wood, as we took time to celebrate our Wedding Anniversary at the Rock Inn.
This year has been a little more hectic than last, with plans for our Post Retirement Gap Year well under way, and the need therefore to fit as much in into the remaining time at home requiring much more prioritising than usual.
However with Carolyn on a summer break from work, we decided to head off into the Devon hills and with me turning to a little book, 'Fairly' Easy Walks on Dartmoor, I picked up a few months ago that contains some walks on Dartmoor that we hadn't seen before, which I fancied giving a go.
Since March this year I have been working with a new walking app 'Footpath' which I am finding very intuitive to use, enabling me to plan walks very quickly on the great selection of maps, which include Ordnance Survey and so had our route for Walk No.12 planned in in no time and all set to go on the phone.
The maps below give you an idea of the look of the system and where our route would be taking us, just north of Widecombe in the Moor over a distance of five miles.
What I really like about Footpath is the simple planning tool that lets you easily select points along the route you want to go and then the app seamlessly plots the most appropriate route using recognised footpaths and avoiding, hopefully, trespassing on to private land.
So far it has proved faultless and very easy to use.
The walk is described as the most strenuous in the book, and a look at the incline graph married up to the route shows the steepest part of the walk climbing up from West Coombe to the top of Hookney Tor.
This happened to fit in well with our walking schedule at the moment as we are doing a bit of pre-match training in readiness for our trip away which will see us doing a bit of alpine trekking and with last months all-day sixteen mile hike around the Exe Estuary under our belt we decided a bit of hill climbing would be a good work out, not to mention this part of the moor is one of our favourite areas to go to, including as it does the Bronze Age settlement at Grimspound closely followed by a pint in Widecombe to help see off the day.
Setting off from home at about 11.30 we arrived at our start point near Natsworthy Manor just about 13.00, to set off north through the woods around Heathercombe towards our first checkpoint (1) at Kendon.
The weather was set glorious, and with a packed lunch in the rucksack together with a flask of tea and other trail snacks, supplemented by the fantastic crop of succulent blackberries to be found just about everywhere in Devon this summer, and causing me to take a bit longer on some legs of the route, we were off.

The short stretch between Lower Hookner to West Coombe, checkpoint (2) on the route, as we turned west, in preparation for climbing out of the valley and the field enclosures onto the open moorland above, proved to be the only really challenging part of our walk as the sat-nav signal was temporarily lost and when up again showed we had slightly deviated from our track requiring us to retrace our steps across one field to relocate the path that lead up to the higher ground.
The climb out from West Coombe lived up to its billing and was quite a climb, particularly on the first stage. That said we took occasional stops along the route, to get our breath but also to drink in the ever widening view of the countryside below, stretching out to the east towards North Bovey.
The climb up on to Hookney Tor follows a very clear path with a great view of King's Tor on the left and medieval tin mine shafts on the right, heavily over grown in summer fern cover, but an area you probably would not want to walk the dog in, with signs back in West Coombe indicating the danger of straying too far from the path.


Dartmoor is an ancient landscape and the first Britons have left their mark in the area with burial tumuli, stone rows, circular stone houses and enclosures dotted across landscape with often a preference for notable burials to be placed on some of the highest points in it, with Hookney Tor in close proximity to Grimspound being a notable example, or those we encountered on our walk to Black Hill covered in  my post from last year.


English Heritage describe Grimspound as perhaps the best known prehistoric settlement on Dartmoor, estimated to date from 1450 - 700 BC, and with its massive boundary wall encompassing within its 160 yard diameter enclosure, 24 surviving stone roundhouses.

The top of Hookney Tor overlooking Grimspound made for a great place to take a breath, enjoy the view and get ourselves ready for the final leg, relatively downhill back to our start and the car.
The route back would see us walking down the southern slope of Hookney Tor to then walk through Grimspound on the path east back to Natsworthy but not before stopping off just after checkpoint (4) to pay our respects to a very moving WWII memorial and crash site of 49 Squadron Hampden X3054, squadron code EA-S (Sugar).

Carolyn and I have visited Grimspound many times over the years but we never grow tired of seeing this stunning ancient settlement and imagining the folks that once inhabited the area, likely living a much harder life that we can possibly imagine in the 21st century. 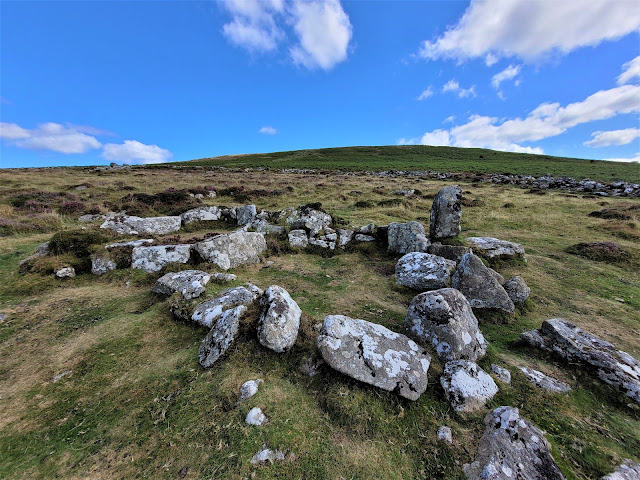 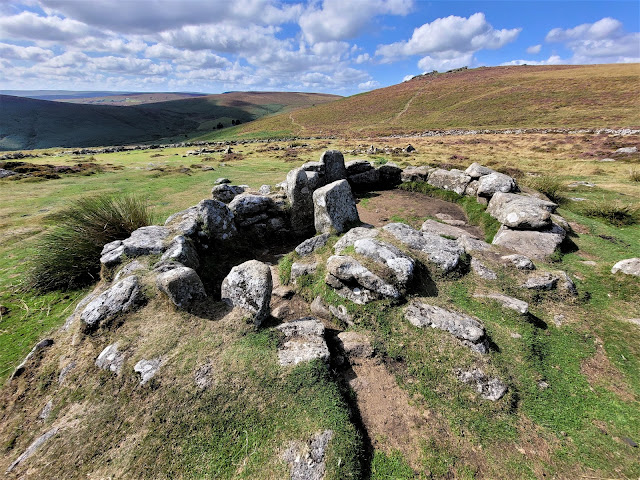 Just as we passed checkpoint (4) on the map we saw the WWII memorial stone we were looking for and the path leading off to the right and the cleared ground around it.
The area is the crash site for Hampden X3054, S-Sugar  of 49 Squadron, that failed to return to its base at RAF Scampton in Lincolnshire, from a 'Gardening' mine laying operation off Brest on the night of 21st - 22nd March 1941 after taking off at 18.20 hrs.
The Bomber Command War Diaries list 66 aircraft taking part in the op, 34 Wellingtons, 19 Blenheims, 12 Hampdens and 1 Stirling with a Blenheim lost alongside S-Sugar.
All four of the crew were killed in this crash, but I could find no details explaining the loss, although March might not have been an ideal time for navigating across Dartmoor in 1941, especially if the aircraft had been damaged beforehand.
The crew are listed as Pilot, Pilot Officer Robert Wilson age 25, Observer/Pilot, Sergeant Richard Ellis 23, Wireless Operator/Air Gunner, Sergeant Ronald Brames 22 and Wireless Operator/Air Gunner, Sergeant Charles Lyon 23.
Both PO Wilson and Sgt Ellis were laid to rest in Exeter Higher Cemetery.

The memorial was a short walk to our start point and we were back three hours after setting out, which included a few stops for breathers and bites to eat along the way, not to mention simply stopping to take in the views.
Other Sites consulted for this post
http://aircrewremembered.com/wilson-robert.html
https://www.49squadron.co.uk/gallery_5
Posted by carojon at 23:03