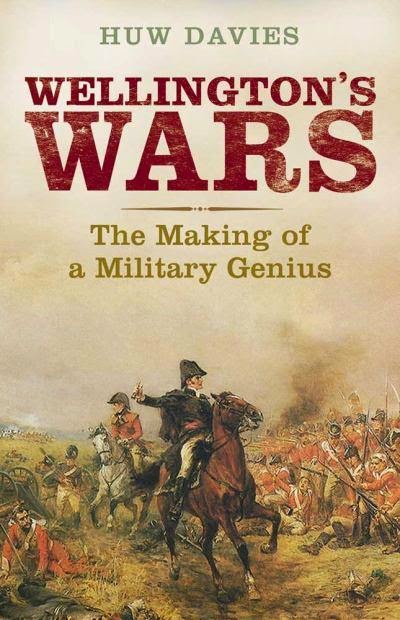 I have been doing a bit of multi task reading since my last book review, taking in a bit of Roman History research amongst other things.

On the last roll out of the Oporto Scenario back in July, a friend of mine, Martin, who played the roll of Soult on the day, loaned me his copy of "Wellington's Wars" by Huw J. Davies.This book is now on my Amazon wish list to go in my Napoleonic library, and I thought I would share my thoughts on it and why I am keen to get my own copy.

As you can probably guess, I really enjoyed reading this title, and as a self confessed admirer of the great man, I have always found him difficult to like, being a confirmed snob and eternally suspicious of any officer who treated his career as a profession, fearing another budding Bonaparte in the ranks from the middle classes. However like his opposite Great Captain, Napoleon, you have to see the man complete with his strengths and his faults to really gauge the measure of the man and better appreciate his accomplishments. This book gave me a better insight into the development of the young Sir Arthur Wellesley and the influences that directed his later accomplishments as the greatest British general since Marlborough.

Unlike many continental powers, the army was not the principal force in British strategic warfare, being very much second place to the Royal Navy. British planning worked very much on the basis that British land forces would only operate in conjunction with allied forces and that, due to its limited availability of manpower resources,  it needed to avoid heavy losses. Indeed when Wellesley entered Portugal in 1809 he was operating under three very strict imperatives in order of priority.

1. Do not lose the army.
2. Liberate and keep the French out of Portugal.
3. Eject the French from Spain

With these imperatives in mind the future Duke of Wellington set about turning the war with France in Britain's and her allies favour, but always with a process in mind to achieve, in time, all three imperatives. This book shows how from his early experiences in the Low Countries and India and developed during the war in the Peninsula, Wellington developed his ideas of light and quick warfare, his skills in managing the expectations of others and his building an intelligence gathering network second to none.

The title of the book describes the "making of a military genius" and then sets out to present the facts that support this proposition, in a very compelling way.

The book starts by focusing on the early military career of Wellesley, taking as its start point 1794 when, as Lieutenant Colonel Wellesley, he lead the 33rd Foot into the Low Countries as part of the ill fated expedition lead by the Duke of York. The lack of a cogent plan between the supposed allied forces of Prussia, Austria and Britain was an early lesson in how not to manage an alliance based campaign and witnessing the indiscipline of British troops towards the Dutch civilians gave him an early appreciation of the problems generated by an army out of control, due to poor administration and logistical planning. These early lessons would bear fruit in the planning of his own campaigns.

Narrowly missing a potential posting to the West Indies, and the threat to his life through disease that that posed; his regiment's ship being detained by gales en route, the 33rd were directed to India where they arrived in 1797. This turn of events was to be a pivotal moment in the career of the young Wellesley, as it was in India that he learned the military and logistical skills he was to use with such insight and ability later on, together with the awareness to manage the various stakeholders (allies and political masters) that a British General would need.

With his brother recently appointed Governor General of India, Wellesley gradually assumed more responsibility and was very much involved in the planning and preparation for the campaign in Mysore in 1799. Huw Davies goes into some detail about the challenges presented in supplying armies in India and the impact this had on operations. It was after the fall of Seringapatam that Wellesley came up with his detailed analysis of the issues faced and his prescription for change, an analytical ability that he would demonstrate throughout his military career.

His prescription was a complete move away from warfare conducted on a total dependency of supply, to one more designed to reap the benefits of speed and manoeuvre, by conducting warfare in the "Indian practice" designed to achieve an effect quickly and decisively. This "Light and Quick" method of warfare would make the best use of intelligence and analysis to allow swift decision with highly mobile and lightly laden troops taking decisive aggressive action against known enemy positions.

Here then lay the seeds of perhaps the finest demonstration of this concept, when in 1813 with a French army on the defence in Spain, and with British and allied forces in the ascendancy, Wellington conducted his "Light and Quick" campaign culminating in the decisive Battle of Vittoria.

When this perceptive awareness of how to conduct offensive warfare was coupled with an emphasis on intelligence gathering and interpretation, we can see the genius in the making. Davies takes us through Wellesley's career highlighting the key moments that show this development culminating in his crowning achievement with the defeat of Napoleon at Waterloo.

I should also add that the book shows his weaknesses as well, with the occasional moments of almost reckless behaviour in the face of contradicting intelligence. The attack at Assaye in 1803 and the march on Burgos being two classic examples where he underestimated his enemies force and potential, with an arrogant self assurance in his own assessment; but got away with it through his shear audacity at Assaye, but failed dismally at Burgos and blamed others for an error in judgement that was fundamentally his.

In addition to his recklessness he could occasionally make serious under estimations, such as his cost requirements to build and train the Portuguese army which with added costs to build the lines of Torres Vedras put serious strains on the British exchequer and put payments to the forces in serious arrears. These failures though, only emphasise for me the human frailties we all have to a lesser or greater extent. The mark of the great man was that when he got into difficulty through his own misjudgement he had the massive ability to extricate himself on all occasions.

After reading this book I came away with a much greater appreciation and understanding of Wellington the soldier and the way he worked within the constraints imposed upon a British Army commander of his day to become one of the Great Captains. I also came away liking the man more than I did originally and I agree with Huw Davies that the Duke of Wellington truly merits the title of military genius.

If you are interested in this period of history and the great man himself then I would really recommend this book as a great read.