So the 45th Foot completes the forces that made up Mackenzie's 3rd Division, and his 1st Brigade tasked with the rear guard at Casa de Salinas.

In 1741, during the war with Spain, seven new regiments of the line were formed one of which was the the 56th Regiment of Foot. The new regiment was raised by Daniel Houghton, formerly a Captain in the 1st Foot Guards. In 1748, following the peace, several regiments above it were disbanded and the 56th rose to 45th in seniority. 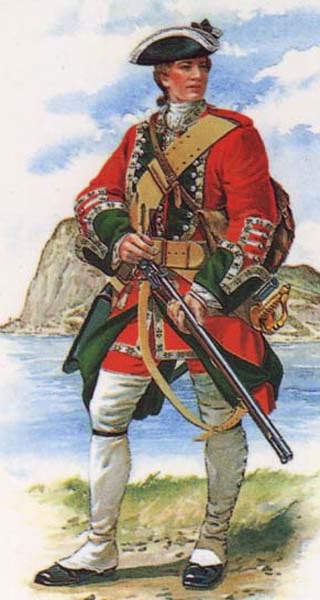 The regiment served in the American War of Independence from 1775-83 and on its return to England was billeted in Nottingham where it began rebuilding its strength around the 100 men that returned. With 300 men from the city joining its ranks, the locals petitioned King George III to add Nottinghamshire to the regimental title. 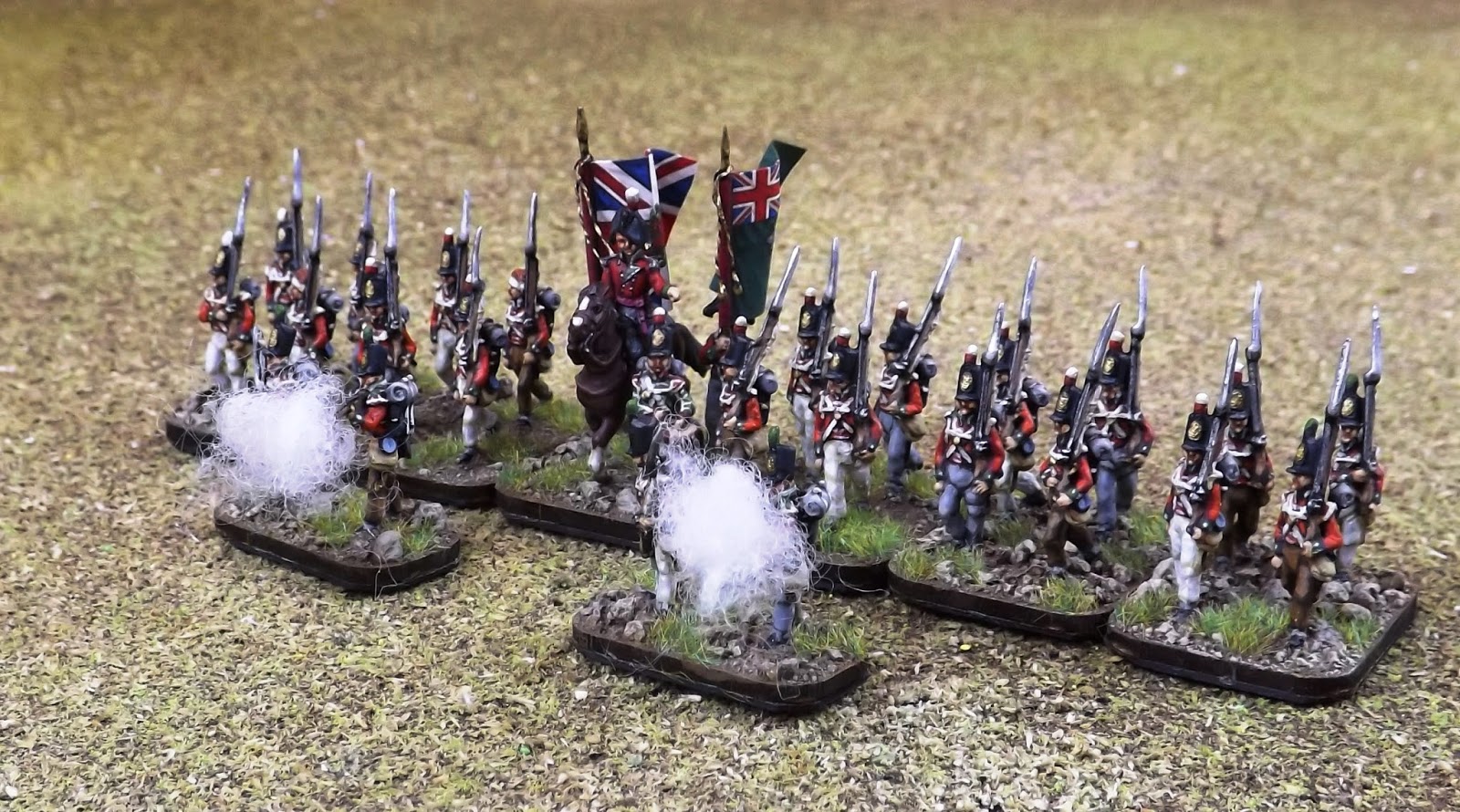 In 1806 the regiment was part of British invasion forces involved in the campaign against Spanish colonies in South America, before returning home and then being sent to join the British expedition to Portugal in 1808, landing at Mondego Bay on the 2nd August 1808. The regiment was destined to be one of those fairly rare British units that would serve in the Peninsular War from the beginning to the end in 1814.

After taking part in the Vimeiro campaign the 1/45th were not brigaded as part of Sir John Moore's army that was eventually evacuated back to England, although it seems that it tried to join him during the retreat to Corunna. Returning to Lisbon, it was part of the British garrison that was available to Sir Arthur Wellesley on his return to the country in April 1809. 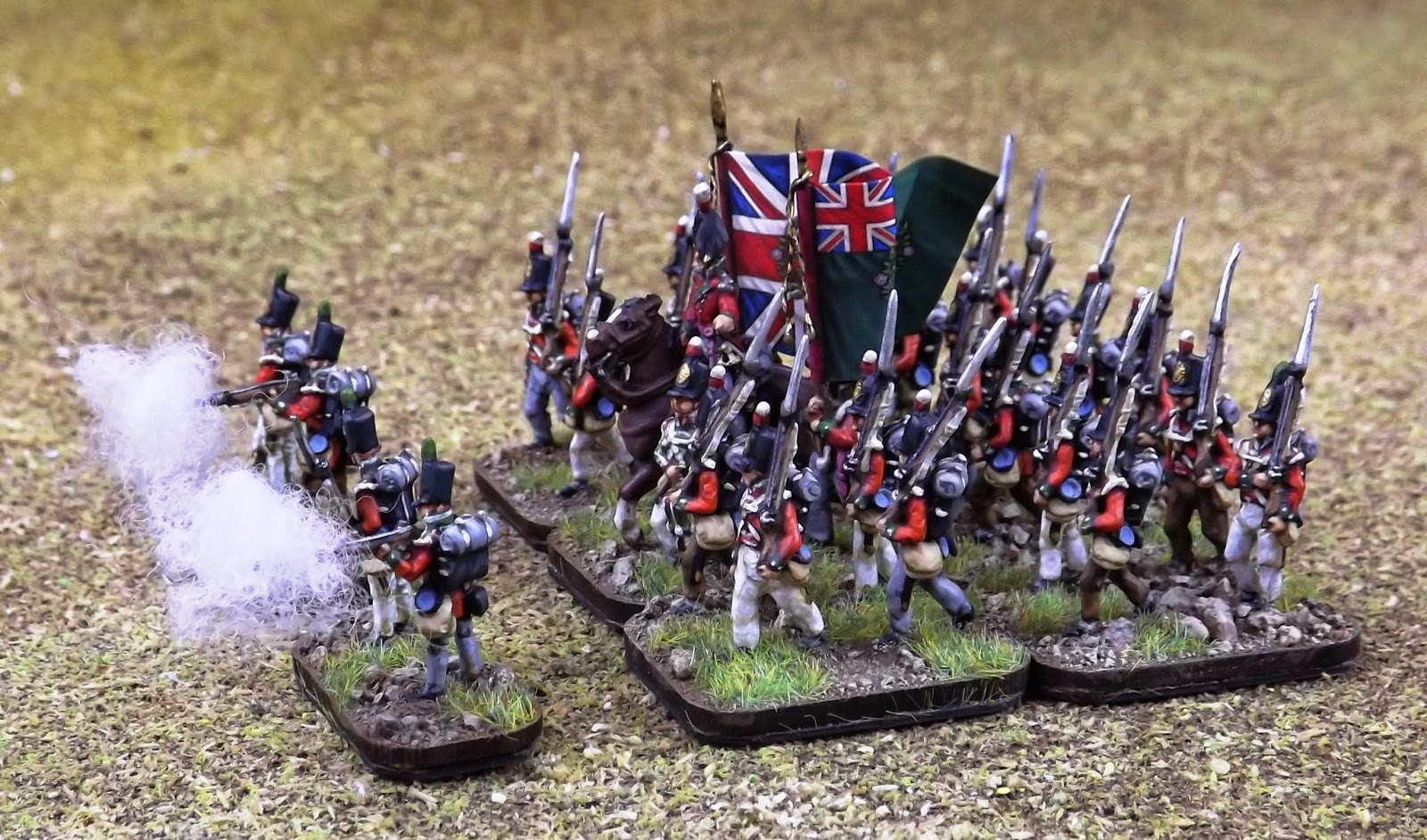 The 1/45th by this time were a seasoned Peninsular battalion and did not suffer the attrition that the other younger battalions in the brigade did. Thus prior to the march into Spain in July they had managed to pick up men from hospitals and detachments and increase their numbers for the forthcoming campaign.

In addition the brigade was restructured with the loss of the 3/27th. 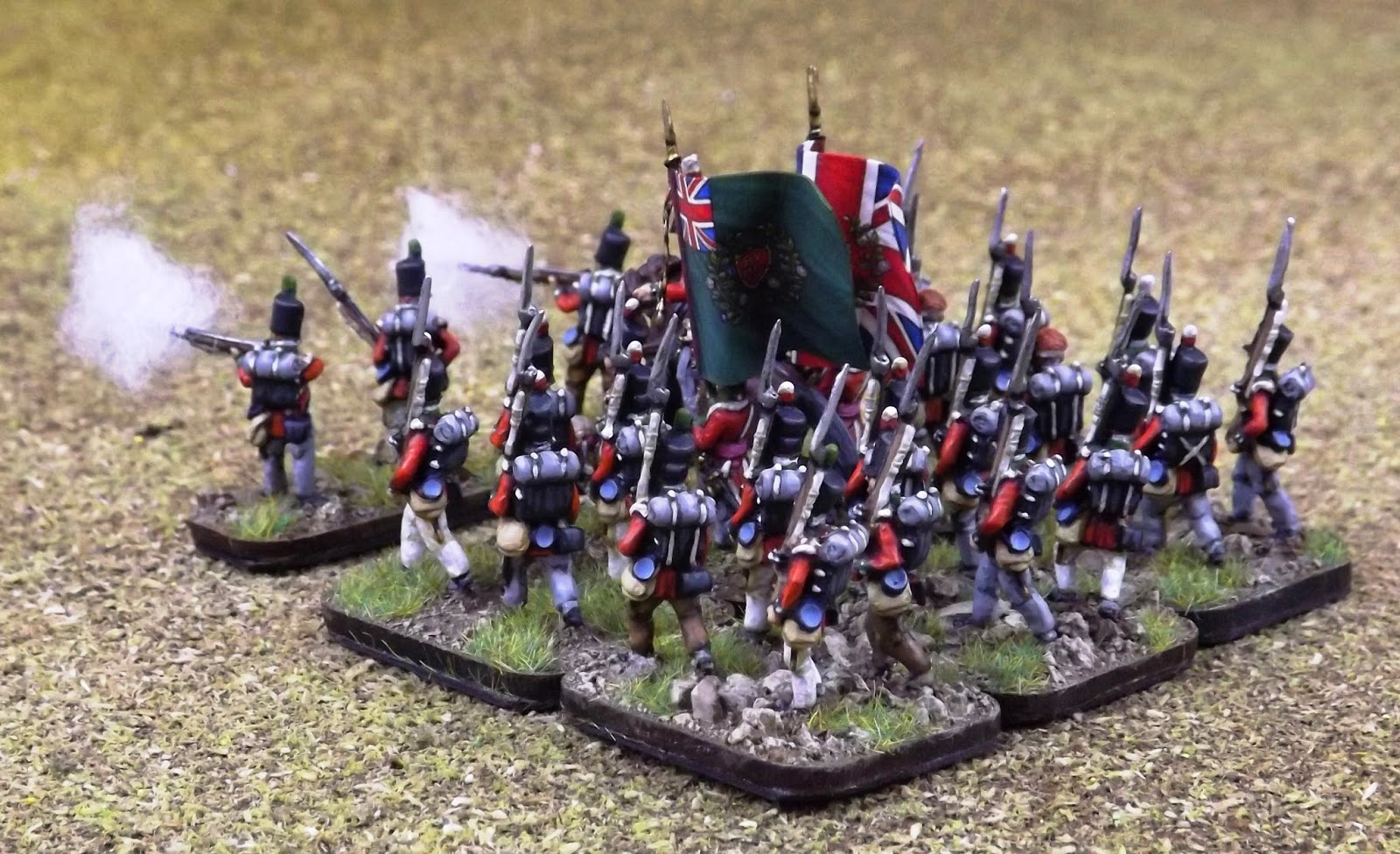 The 25th of July found the 1/45th along with its fellow brigade members at Casa de Salinas overseeing the retirement of the allied army onto the Talavera position. General Mackenzie's 3rd Division was set up, as per normal, with his senior first brigade (2/31st, 1/45th, 2/24th) on the right and the second brigade (1/88th and 2/87th) to the left, note the 5/60th Rifles, part of 2nd brigade, were forward of the line on picket duties.

The 1/45th was in the centre of the first brigade when the position was assaulted and was to the left of the three battalions (1/88th, 2/87th and the 2/31st) that met the full force of the attack causing them to break.

The French attack consisted, according to Oman, of a Legere battalion (16eme Legere) in line followed by twelve other battalions, presumably in column. Andrew Field states that General Lapisse looking to take full advantage of surprise launched three battalions of the 16eme Legere into the attack before the other troops were up. He goes on to state that the half battalion of the 5/60th was beyond the frontage of the French attack and able to open fire on its flank. The other, the 1/45th, which had fought valiantly at Vimeiro - "a tough old regiment, was never shaken for a moment" - also held the French up while Wellesley and their own officers rallied the routed regiments. 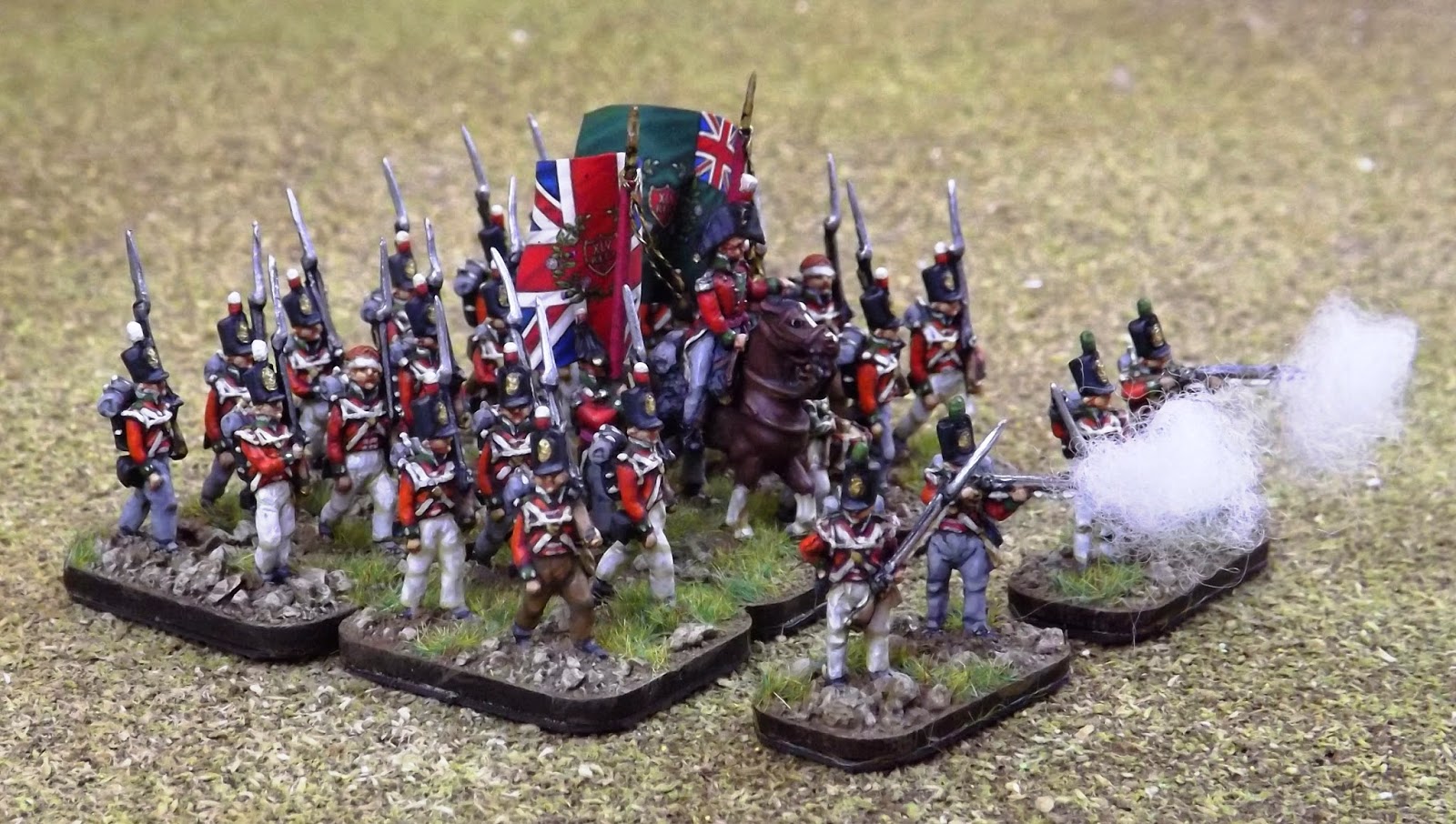 Field goes to say, "Facing these two steady regiments, the French I Corps was introduced to British firepower for the first time. Although the 9eme Legere could not see the engagement, the sound of it in the distance still made an impression". "It was the first time we had heard the noise of an English fusillade..... indeed never had we heard a rolling fire as well fed as that." 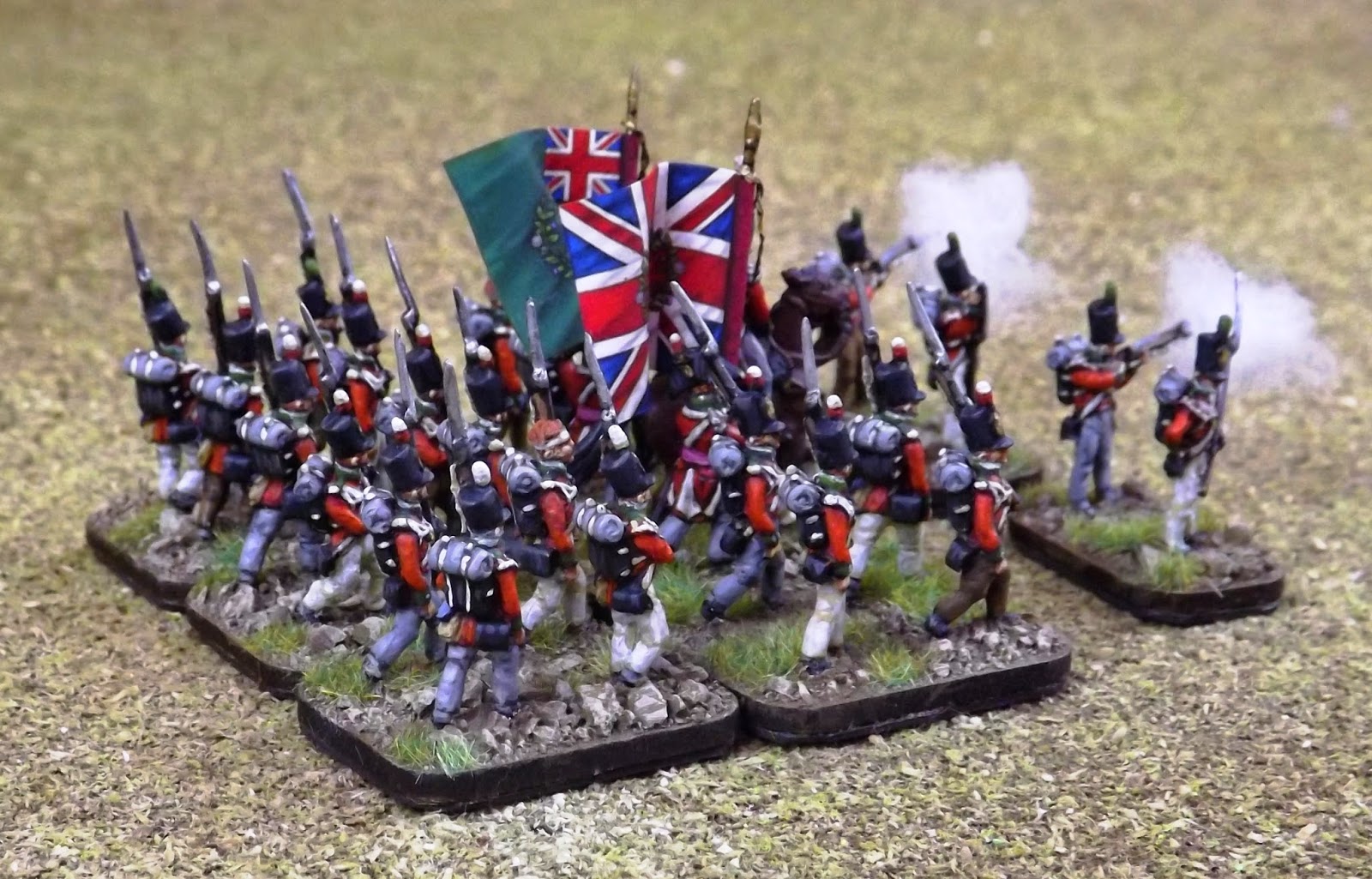 Casa de Salinas revealed the inexperience of some of the British troops who had allowed themselves to be surprised even while their commander-in-chief was in their midst.
To quote the Napoleon Series "This misadventure cost the 1/45th, 7 men captured, 4 killed and Lieutenant Colonel William Guard and 13 others wounded".

The following day, during the Battle of Talavera, the 1/45th would suffer the fate of its fellow brigade battalions, being bombarded by French artillery in the morning and taking part in supporting the Guards brigade by bringing the French counterattack to a halt with steady volley fire. They would go on to lose a further 9 men killed, 133 wounded and 13 missing.

Wellington official report of the Battle of Talavera mentions the 45th.
"Upon this occasion the steadiness and discipline of the 45th Regiment were conspicuous". which given his comments and their record outlined above easily explains the nickname gained at Talavera - "The Old Stubborns".

My 1/45th are composed of figures from the Xan British Line infantry range with the two Ensigns and Lt. Colonel Guard from AB. The Colours are from GMB flags.

Next up The British 3rd Division at Casa de Salinas, on parade
Posted by carojon at 06:10