I recently laid out my ideas on where I plan to take the Napoleonic collection and in that vain of looking ahead I thought you might like to see what I have in mind for the Ancient collection.

The emphasis of JJ's Wargames has since its beginning had a very strong Peninsular War theme and that will continue, but as the title of the blog indicates it is about the wargames I like to play and the periods of history I am particularly interested in and that includes periods and eras outside of Napoleonics and the Peninsular War.

One area I am looking forward to shift more time and development towards is the 28mm Ancients collection that I, and more latterly Tom, have started based on the Hail Caesar Dacian War book of scenarios, and a good start has been made on the Roman collection in terms of painted units. In addition with the arrival of three more boxes of Dacian warriors from Caliver (thank you to Dave Brown and the chaps who have set about sorting my order - great service as always) I will have all the troops ready to paint up for that collection with the addition of some nice terrain items from "Grand Manner" planned to be purchased next year. 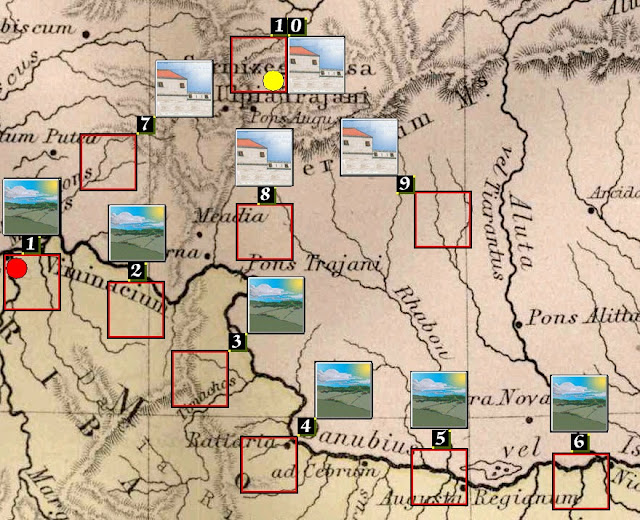 The Dacian campaigns of Domitian and Trajan have always held the most interest for me in terms of the barbarian wars fought by the Principate and of the so called barbarian foes faced by the Romans, I think the Dacians with their use of technology and allied Sarmatian cavalry were among the most dangerous opposition when coupled with the "slipperyness" of Decebalus. So much so that Emperor Trajan amassed one of the largest Roman troop deployments to deal with them once and for all.

I am looking forward to getting stuck into the Dacian collection on completion of the Talavera project later next year (that's me controlling the inner little boy who wants to start now!!).

To add further substance to these plans I have sat down and drawn up a Cyberboard mini-campaign to better capture the linked campaign in the Hail Caesar book with a few additions. The map above illustrates the progress the Roman armies must make through and across the Dacian plains and mountains as they attempt to close in on Sarmizegethusa for the final showdown. The markers on the map having randomised scenarios to be played which are revealed when flipped over. 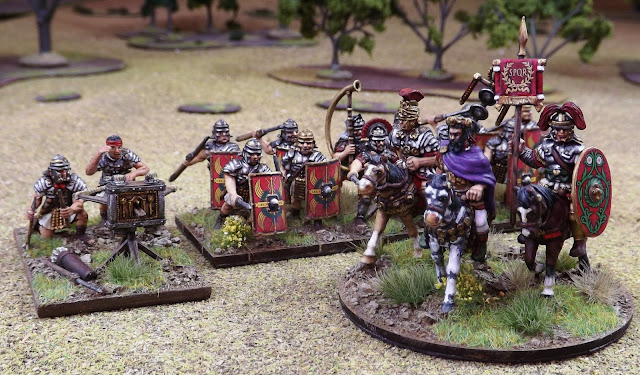 Cyberboard allows for an easy record to be carried forward of the condition of the forces as they progress from one clash to the next by the use of these simple army records that I have plumbed in. These are important to record what units are left to each side after the initial clashes to be able to draw up the final orders of battle. 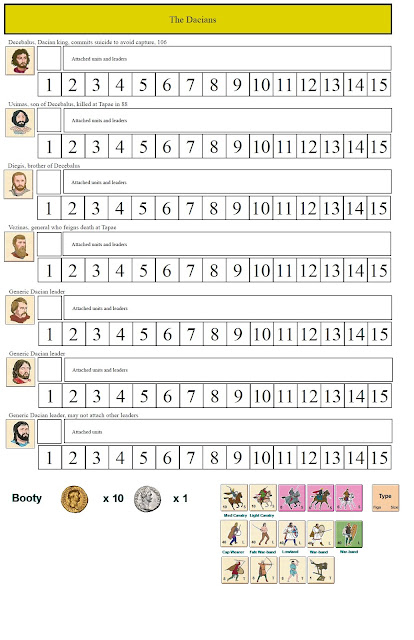 I have also added in a little mechanism to record individual success by the amount of booty captured in the games played. Not only that but I think most Roman campaigns should have a large element of "prestige" modelled into them. The machismo that typified Roman politics contained a lot of managing public opinion on how the war was going and the booty element helps measure that aspect. 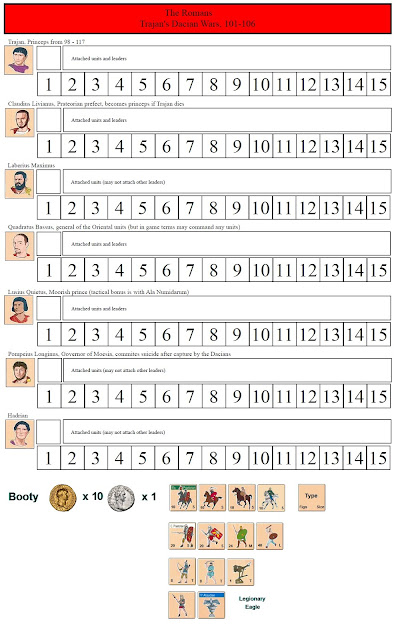 After constructing the Dacian Wars plan I then thought about the next expansion to the collection and the most obvious one would be to build on the small number of German Warbands that can turn up in the Dacian scenarios to be used as a foundation for a collection focussed on the Germania frontier.

The Germania frontier is probably the next most attractive campaign setting for me and on acquiring the Hail Caesar Germania Campaign book earlier this year I started to look at the collection needed to play the scenarios from that.

Needless to say the Roman collection will be pretty much done so the units needed will be Germans and mainly warbands.

I wanted to carry on the theme of using my lorica armoured Romans and given the Augustus/Tiberius period was a time of change and it seems likely that the Roman forces were moving away from the chain mail protection used in Gaul, great against slashing cuts from the long Gallic swords to lorica, better able to stand up to German spear thrusts, I decided to opt for looking at the punitive, revenge driven, campaigns of Germanicus and his pursuit of Arminius and the lost Eagles.

I have just about finished off my Germania Cyberboard campaign plan/game as illustrated in the map I have adapted for it, and so the German collection will be put together after the Dacians/Sarmatians to fulfil this plan.

I have been toying with the construction of this project all year, spurred on by "Eager for Glory - The Untold Stories of Drusus the Elder, Conquerer of Germania" by Lindsay Powell which Will got me for my birthday back in the summer and my recent purchase of the Hail Caesar Brittania Campaign book by John Lambshead. I really liked the way he tailored the tribal differences based on the limited sources and the terrain they operated in. I have taken that idea to Germania with the "Watermen" of Frisi, to the cavalry tribes of the Usipeti and Tancteri and the more common "Forest Fiends" found else where. Note I am referring to some definitions here used in Augustus to Aurelian. 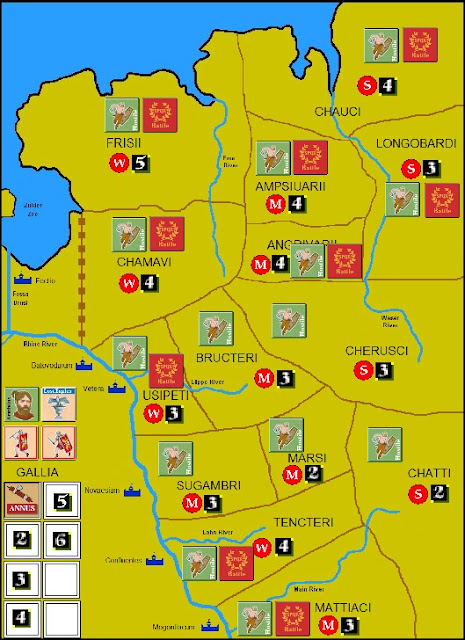 The other aspect I wanted to capture was the fact that Arminius strove, desperately at times, to get the tribes to avoid pitched battles that played into the Romans hands. In this he was not always successful and so I have gone for scenario based tabletop battles rather than just sticking the models out any old way. That allows for the "Arminius effect" by having more battle set ups that allow the tribes to fight on home ground using tactics that suit their set up, with the odd scenario or two that will have the Romans licking their lips with anticipation.

Of course any Roman collection worth its salt has to be doubled up as any fan of this period of history knows the Romans spent probably more time killing each other (rather like the Greeks) than they did killing foreign foes.

Inspired by Simon Miller's (Big Red Bat Blog) Cremona game that he ran last year I think, at Salute, I am also planning to add to the Roman collection as we go along to enable some "blue on blue" action whilst trying to keep the odd barbarian incursion at bay.

YEAR OF THE FOUR EMPERORS CAMPAIGN 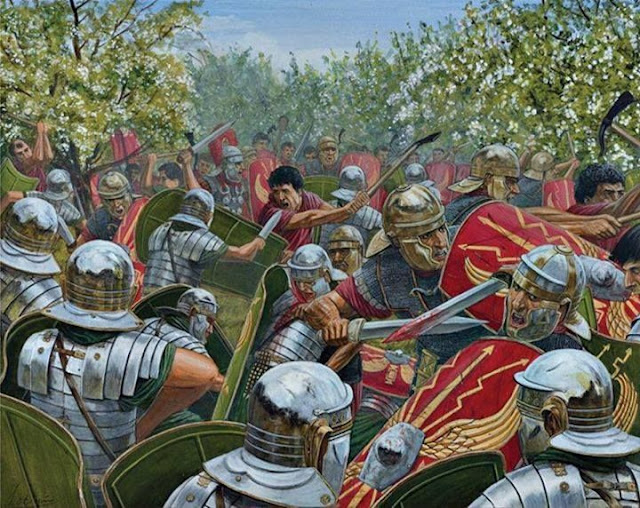 I like my campaign plans to follow the KIS-KISS principle of Keep it Short and Keep it Simple (not Simplistic - that's the other 'S'). The Year of the Four Emperors is a great period to look at for creating that "Game of Thrones" structure between multiple players with very similar but different armies. 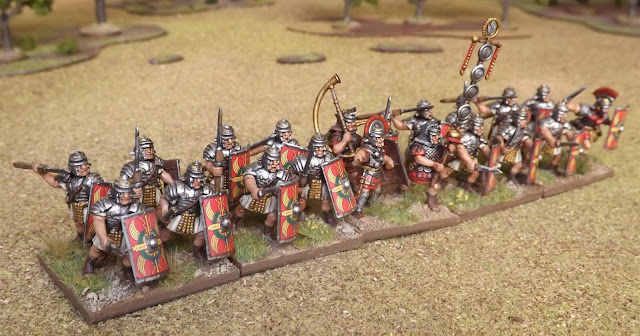 The idea behind my final creation was to take a simple DBA campaign game with its formulaic twelve unit army format and build a more interesting big unit game around it. 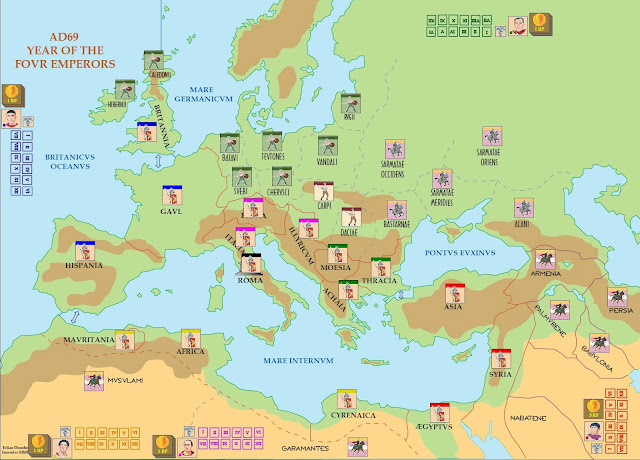 The time of the campaign, 69-70 AD allows me a chance of bringing in my barbarian collections that can feature in this short bloody year of struggle as the five factions wrestle to gain supremacy over their former colleagues. It also gives me an excuse to go on and build a twelve unit Parthian and Pictish force over time, and who knows, maybe a few Moorish tribal types to add more variety.

Not only that but the Romans get to play with mobs of hastily raised citizen legionaries and plain old mobs armed with what they turned up with, together with the odd unit of gladiators, not to mention dodgy Praetorians who no one is sure whose side they're on.

I quite like the way Sam Mustafa, another horse and musket man, genericized barbarian and civilized forces for his Aurelian campaign game with the barbarians effectively characterised as spear and shield types or horse and bow types (I'm sure that would have raised howls of complaint from WRG fans a few years ago worried about their double handed cutting weapons versus long thrusting spears, who knows it might still). That principle could work here with the Dacian/Sarmatians standing in for the Parthians temporarily while the latter get added. 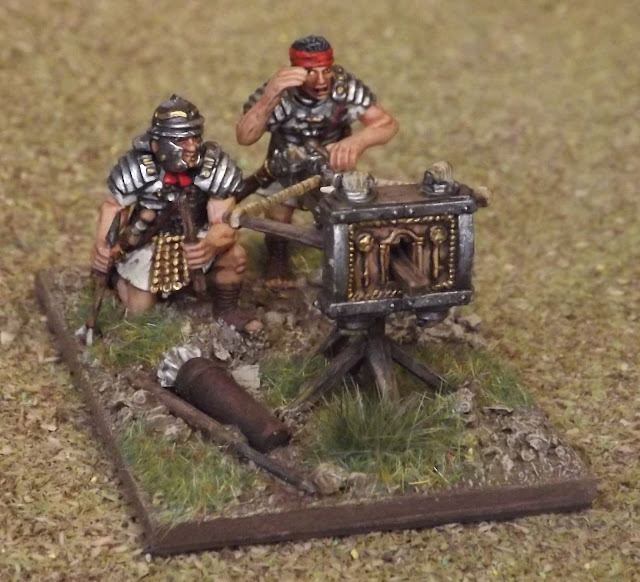 As with the Napoleonics, the Ancient collection plans are percolating in the background and has provided hours of pleasurable contemplative thought about future games.

With regard to rule sets, I know what I want and I know what I don't in terms of the look and feel of the game. I have so far put Hail Caesar, and Sword and Spear to the test and in January "Mr Steve" and I will get together to play "Augustus to Aurelian" which from a period specific perspective are spot on. The twelve to twenty unit army in 28mm seems to be the right size for what I want to do.

I like the look of a twenty figure Roman cohort/unit up against a forty figure Dacian/German warband and the scaling down of say three cohorts of legionaries and three of auxiliaries with some cavalry and artillery to represent a legionary army, hence the twelve unit DBA arrangement could work well with the option of adding in the odd unit or two for variety.

So the plan of campaign as far as the next major collection is concerned is pretty well drawn up and, as with the Napoleonics, just a case of playing some scenarios as the collection grows to a point where we can think about other stuff.

As you can see it is all about beginning with the end in mind and remembering that the plan changes on first contact with the enemy.

Isn't this a fantastic hobby?
Posted by carojon at 01:58