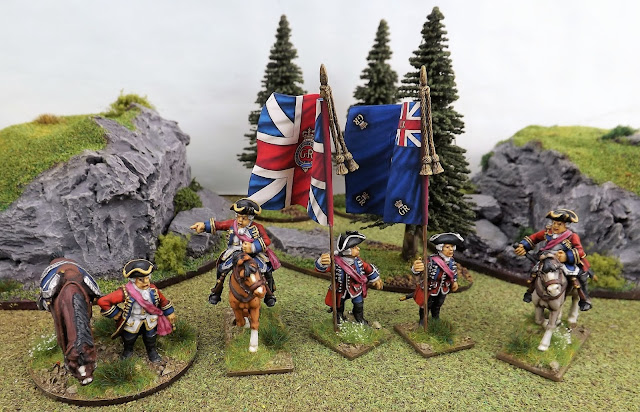 The last month to six weeks has seen a complete change in my usual routine, in terms of painting figures for projects, but that was always in the plan, however I am looking forward to getting back to the norm.

With loft clear-outs and wargaming room changes and now a dedicated bout of 28mm terrain building I am really looking forward to getting back to the Romans and Dacians, which hopefully will include a game or two on my new table set up in the not too distant future. 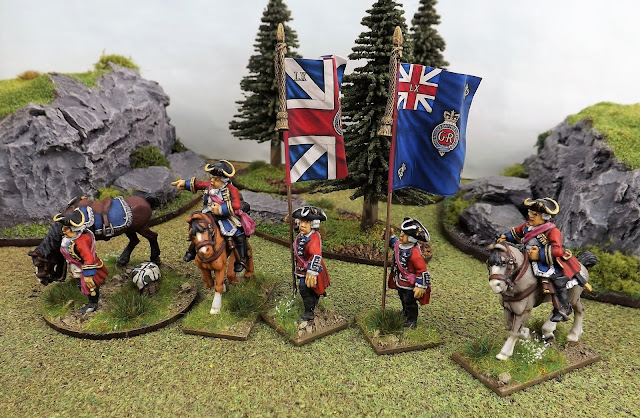 So this post is featuring work I have been doing of figures for my old mate Steve M and his very big FIW collection for Muskets and Tomahawks, Donnybrook or Sharp Practice II with some British General Officers, a 60th Foot Colour Party and some Royal Artillery gunners complete with a couple of six pounders. 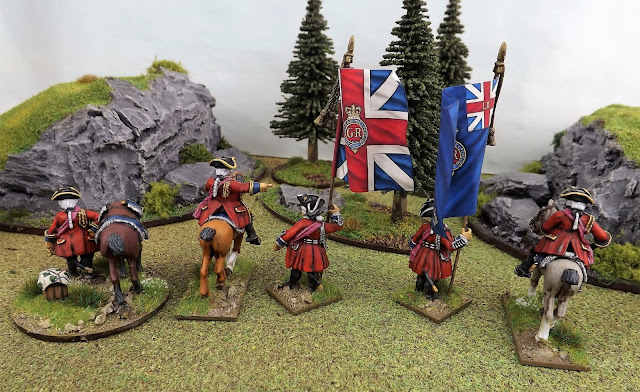 In addition we have our annual big end of year game at the Devon Wargames Group this weekend in honour of a former member, Gus Murchie in which we will be riding out west with the 7th cavalry and dealing with injuns and so I have put together some figures for that game that I suspect might be going to a new home afterwards. 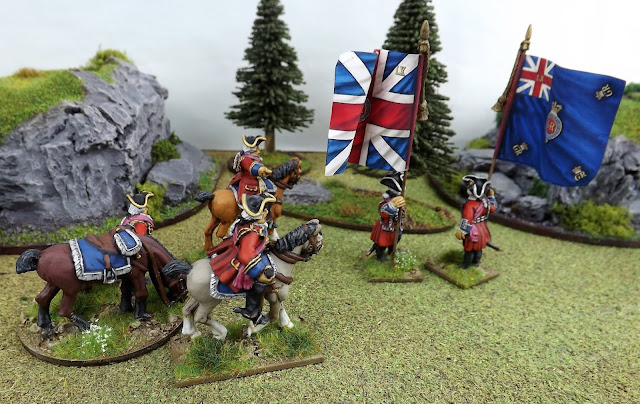 Steve's British Seven Years War figures are a follow up to the 60th Foot I painted for him a while back in July last year and you can see them in the link below and other units I have done for Steve's collection in the label 'Muskets and Tomahawks' in the right hand column. 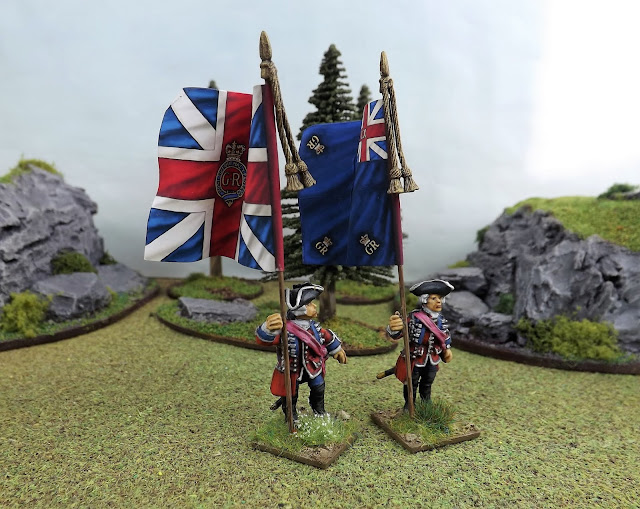 The figures are in this case a mix of Wargames Foundry and Galloping Major (Colour Party) which seem to compliment each other really well.

The colours are of course the excellent range from Graham at GMB Flags and I have no hesitation in recommending them to really finish off a project having used them here and on nearly all my own 18mm Napoleonic miniatures. The really nice finials and chords are from Front Rank and just complete the look perfectly. 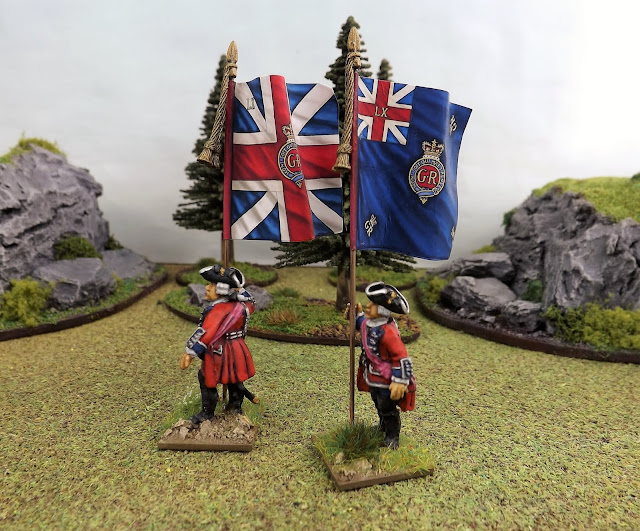 In the background to these pictures can be seen the latest addition to my growing 28mm terrain collection being put together specifically for my Romano-Dacian project but standing in equally well for giving a hint of North America in this case. 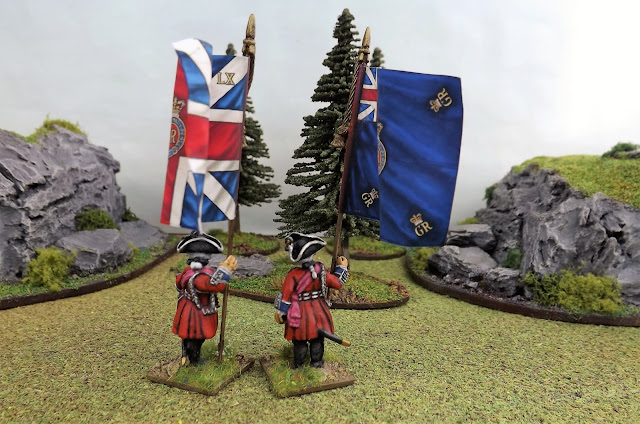 I have had a lot of fun messing about with tree bark, stones from the garden and more scatter material than you could possibly shake a stick at.

Simply put it is like basing figures but on a much bigger scale and those rocky outcrops and tree bases are off to get sealed with my 50:50 PVA:Water spray as soon as I have finished this post, so that shows you how new they are. 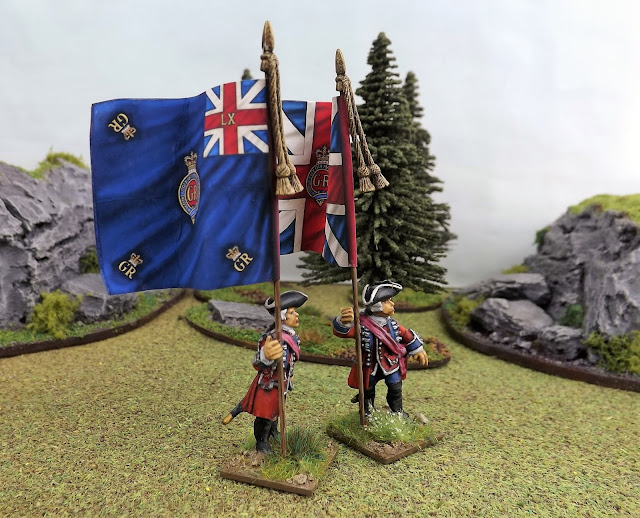 The British General Officers are from the Foundry Seven Years War range and will work perfectly for Steve's FIW collection looking very pugnacious and determined. 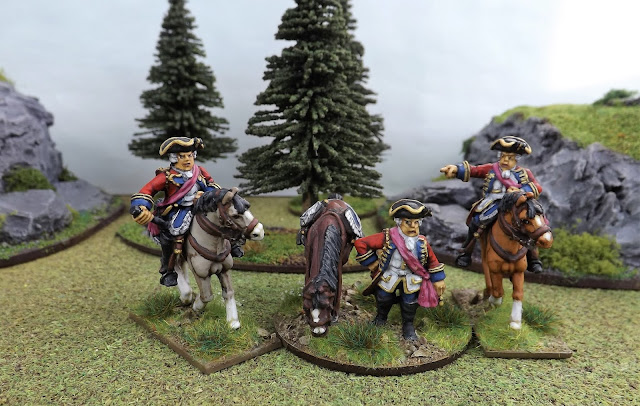 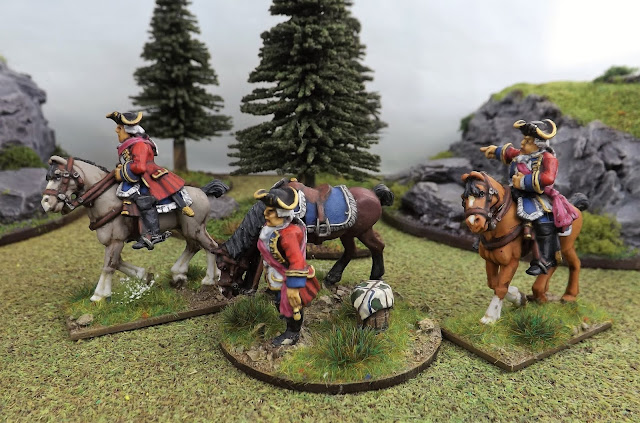 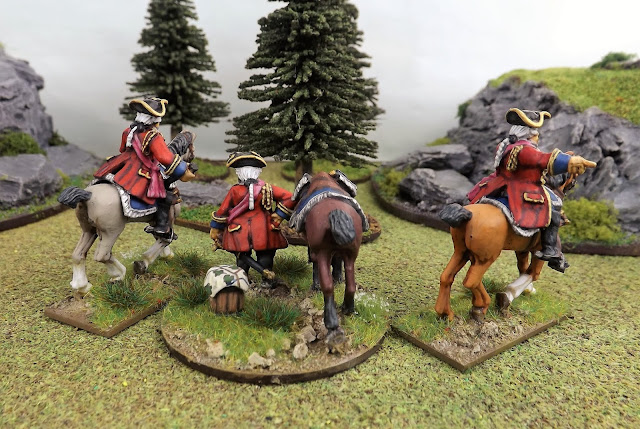 To complete the Seven Years War section of this post we have a regiment always close to my heart as nearly all my close relatives have served in the last century as part of the Royal Artillery and here they are in their original blues and buff of the early period of the regiment. 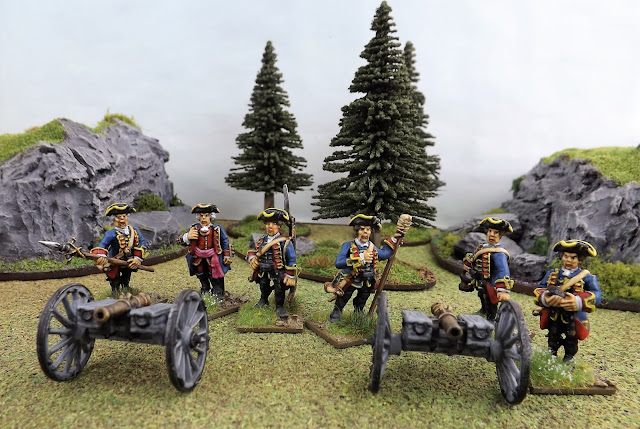 I particularly liked the officer and loader with ball in hand again looking very determined and ready for battle. 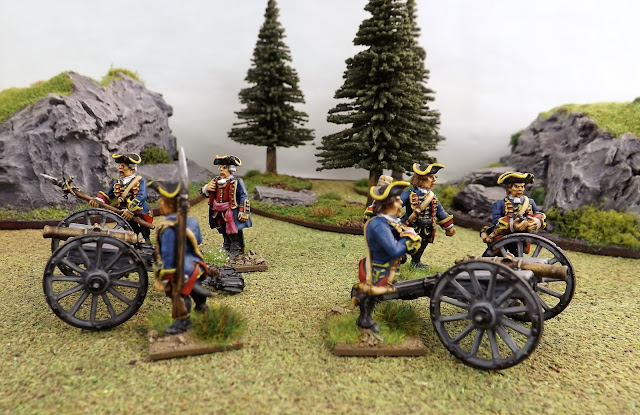 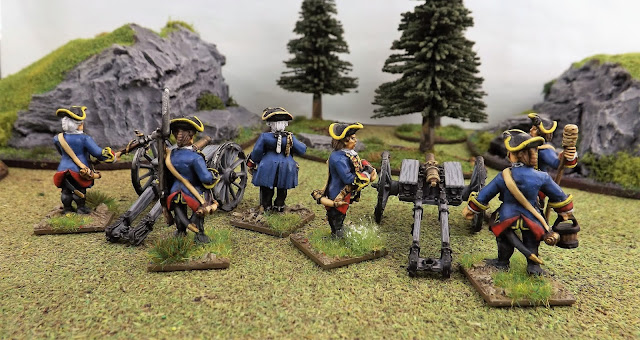 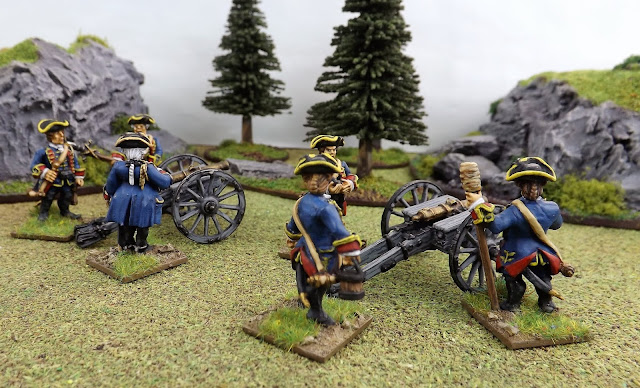 I hope you like them Steve, happy Xmas and see you on the weekend. 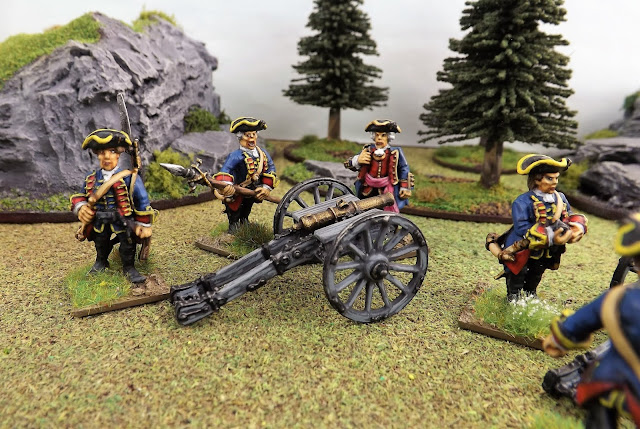 Next up are the other figures I have been working on in between the other activities and ready for the fray this weekend at club. 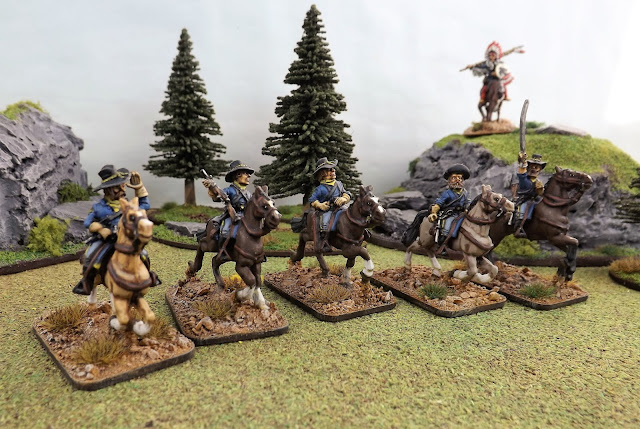 These ten US cavalry figures have been sat undercoated in my loft for about the last twenty years alongside the seven Plains Indians I did paint up for a game I have completely forgotten about at the club. 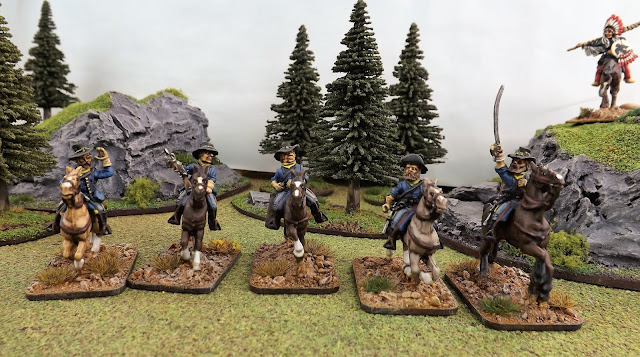 Don't ask me what make of figures they are, possibly Old Glory, but I don't really know as I bought them years ago and dug them out to get ready for this particular club game coming up.

This theme is not really my bag and I can see these figures going as I say to a new home after the game as I am unlikely to add to them, but I had a lot of fun researching them to get them ready for this weekend. 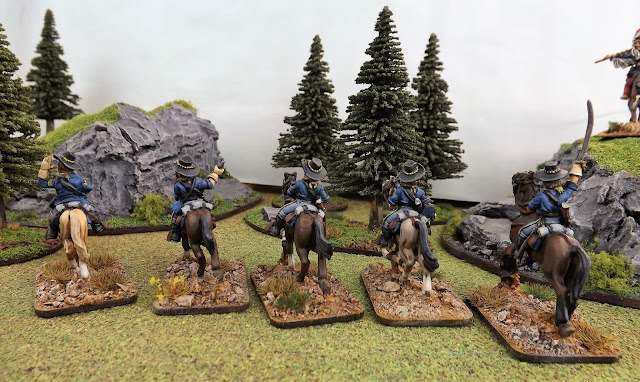 They certainly are full of character and I have painted them very much in a Hollywood filmic style rather than the more likely bedraggled scruffy campaign look that manikins from various American museums and the period photos from the time would suggest. 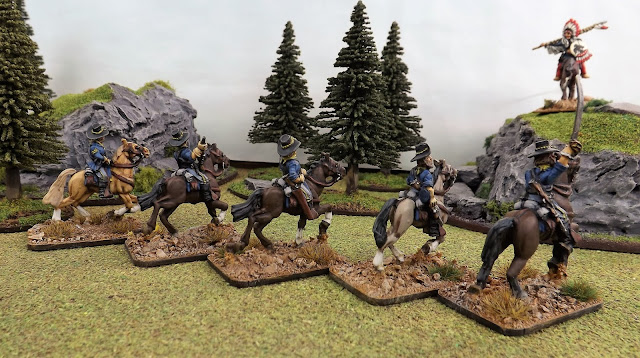 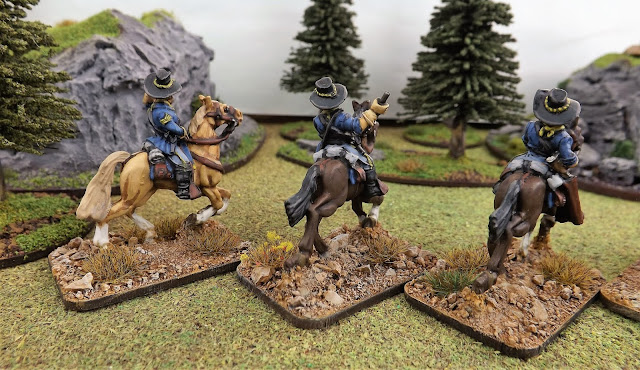 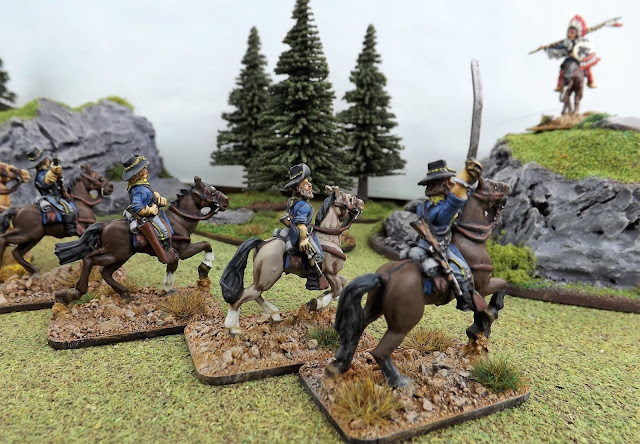 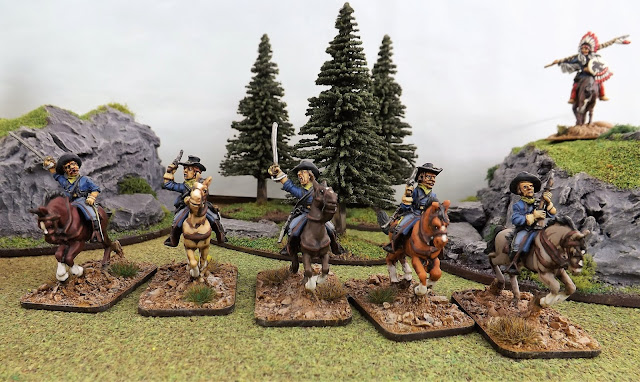 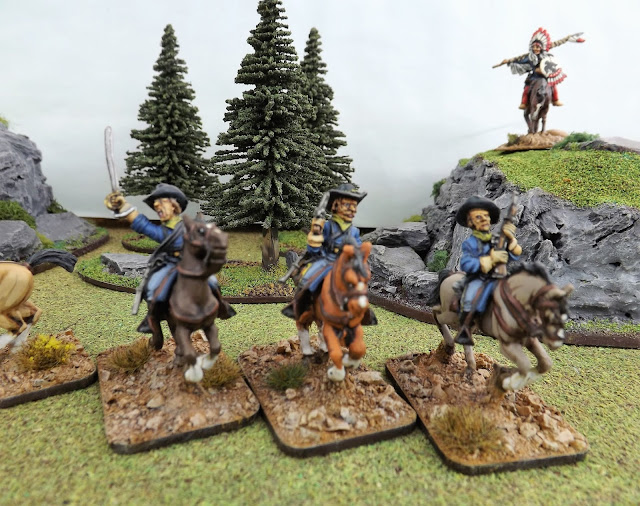 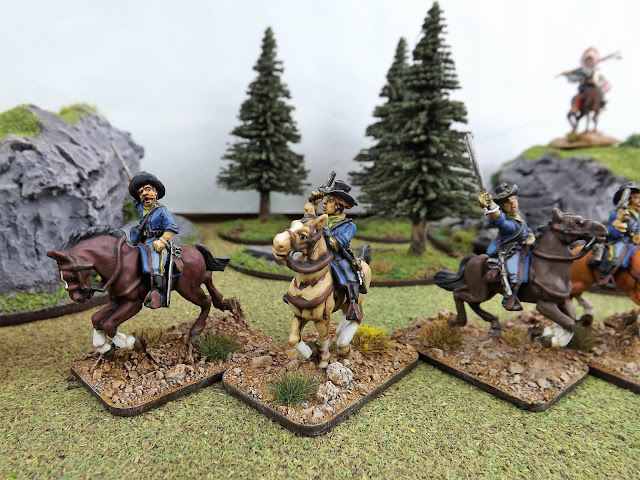 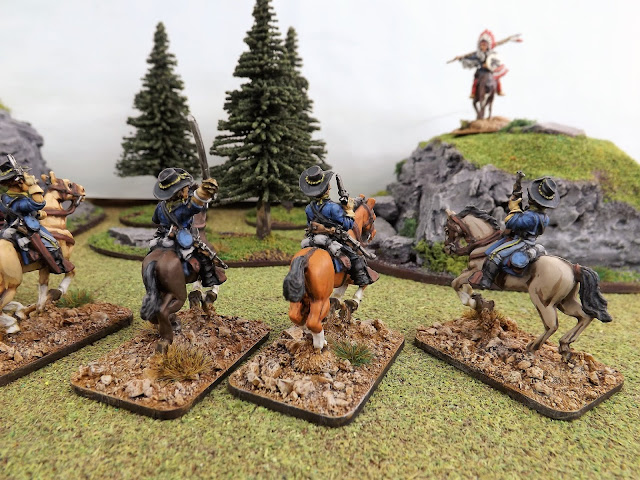 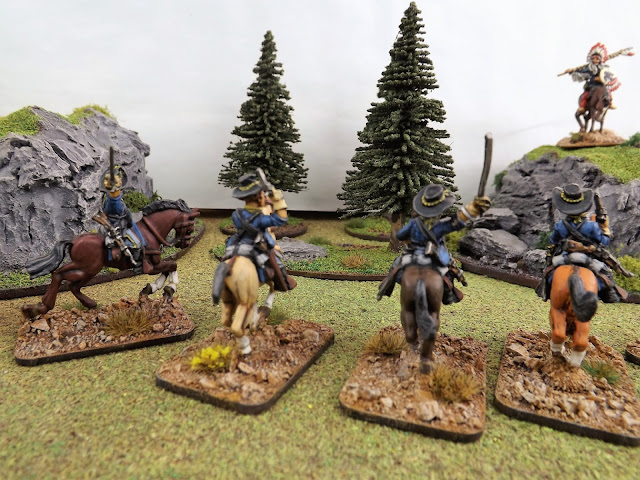 The Indians as I say were painted a long time ago when my technique was still very much developing and so make an interesting contrast between how I painted then and now. That said I decided to just 'tart up' the bases a bit with a wash and dry brush and leave them as seen for tomorrows game. 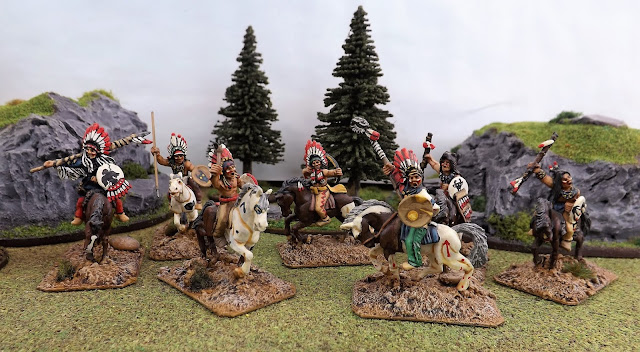 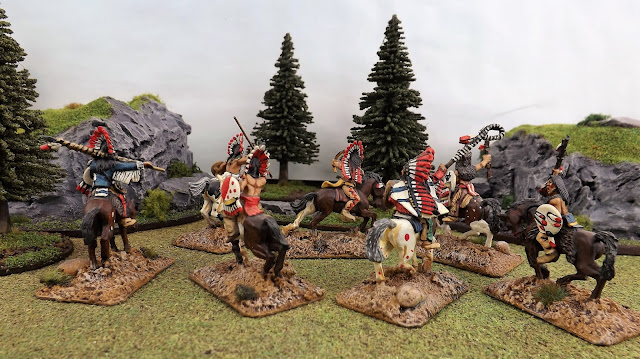 Anyway its back to the terrain building and the next set of figures to go on the paint stick should be some Sarmatians, so that should be fun.
Posted by carojon at 03:47