Terrain Build Update - The Table is Back with New Terrain! 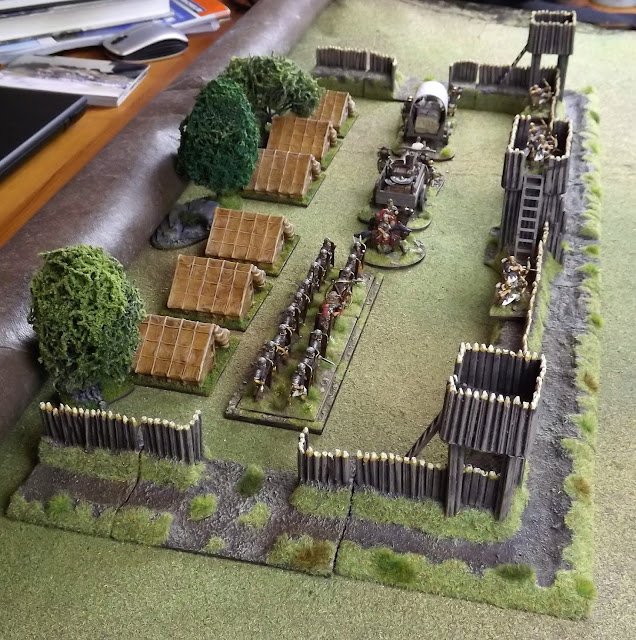 If you have been following the blog over recent weeks you will have seen a few posts covering work on the new terrain collection and room adjustments which are linked by the fact that my room needed first to be rearranged to accommodate a new collection of larger scale figures and terrain and then the terrain needed to be created.

Of course as I tend to work on projects in planned phases, the first phase of the terrain collection was started with the building of my MDF Roman buildings and marching fort earlier in the year. 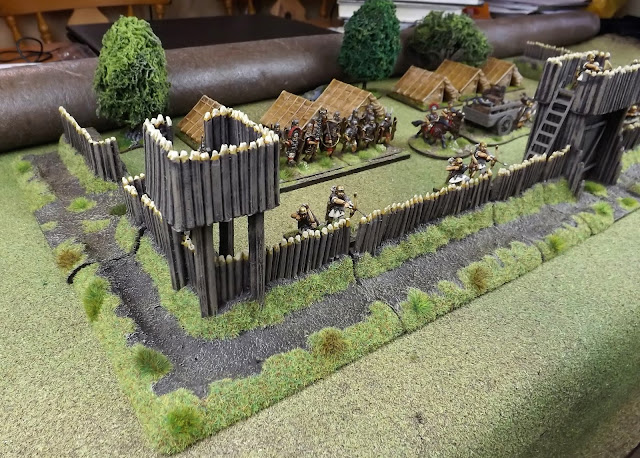 There really wasn't much point in going any further with that first phase as I needed to clear out my loft to create new storage space before hand and that work had to wait until the summer had passed with cooler weather allowing work in the loft to be done comfortably.

Thus I have contented myself by adding to the figure collection in the meantime which has seen sizable groups of units added to both the Roman and Dacian collection. 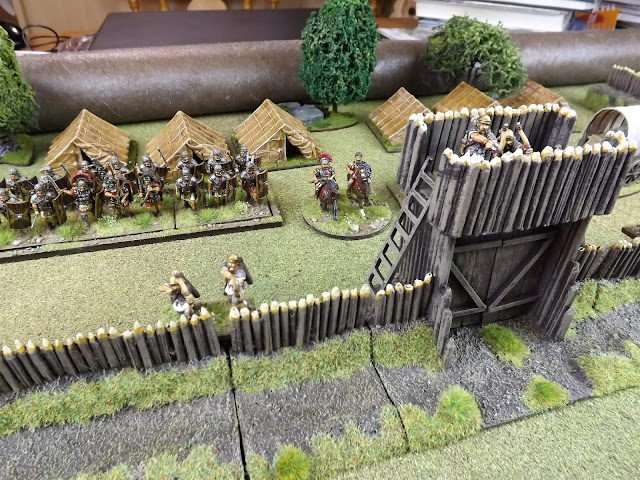 In September I was able to get on with the loft rearrangements which then allowed me to make changes to the wargames room which even now are only partially complete, but with enough progress to allow the start of the second phase of terrain building.

As regular followers of the blog will know I like to work towards running games even with a partial collection and so the terrain, just like the figures has been constructed in that manner. 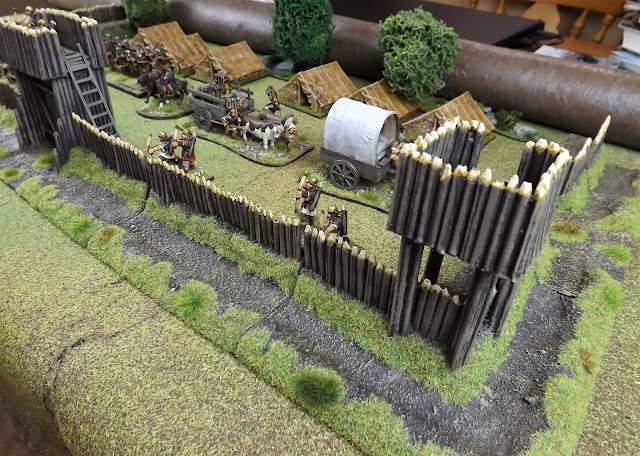 As mentioned the marching fort was completed in the early part of this year, but I didn't want to picture it until I had completed the set of tents that were always intended to occupy part of the interior.

Those tents were included in the second phase build and here they are with the fort and a few figures to give an impression of it when I finally get to deploy it in a planned game.

This style of fort is perhaps more formidable than a simple marching emplacement in that I wanted to create a structure that was not permanent but that had been further improved to act as a staging post that would have no doubt guarded a major supply route in one of Trajan's campaigns. 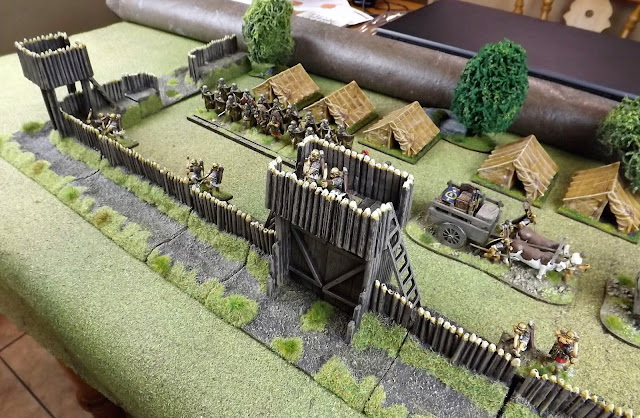 The second phase also included my watch-tower recently acquired from Grand Manner and now sealed and finished ready for its table-top debut alongside the beacon and the small hillock I put together to mount it on. 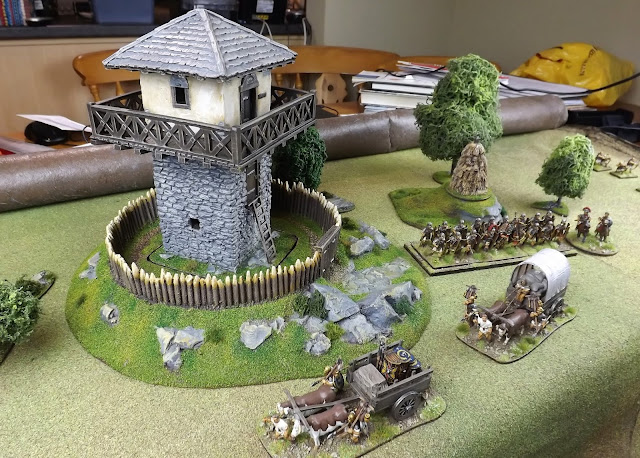 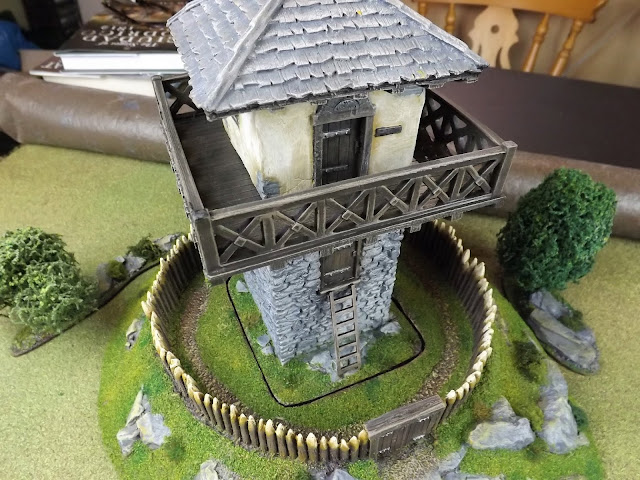 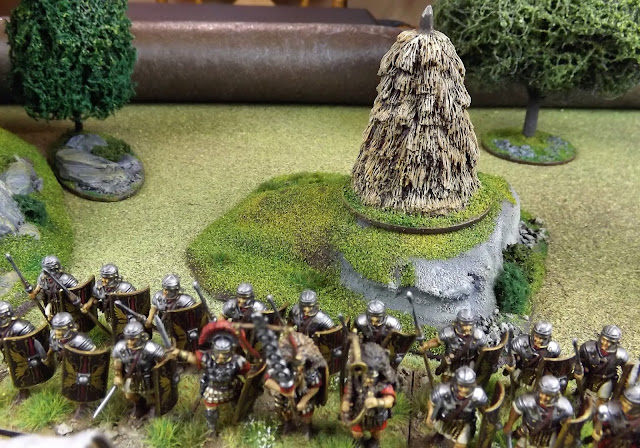 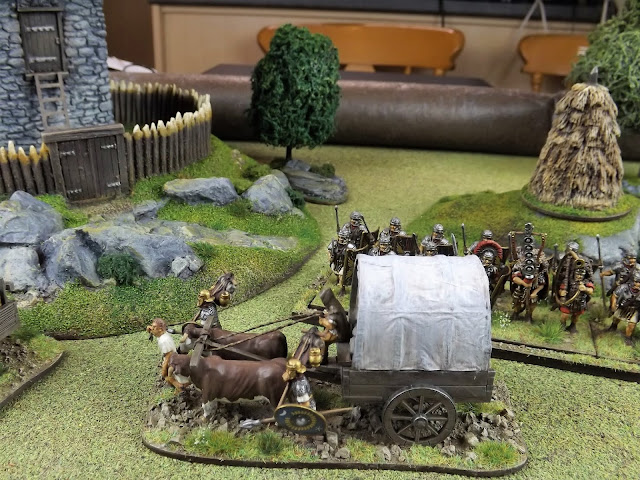 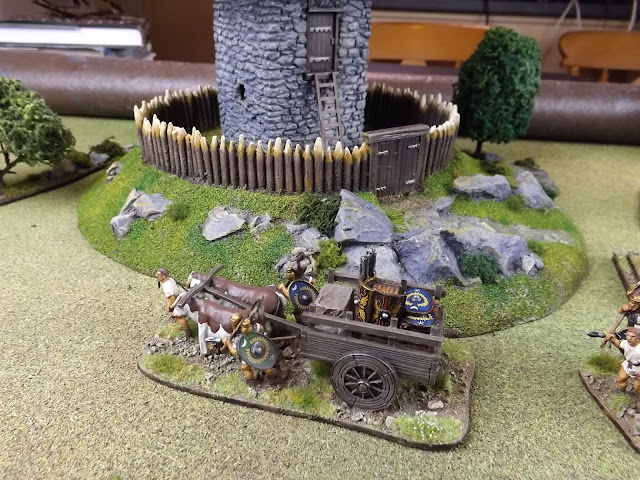 Finally I mentioned that I picked up a second set of river sections from Products for Wargamers at this year's Warfare in Reading and that I intended to finish them off to my own preferences, so once the trees and tower were finished I completed phase two by getting my river sections done. 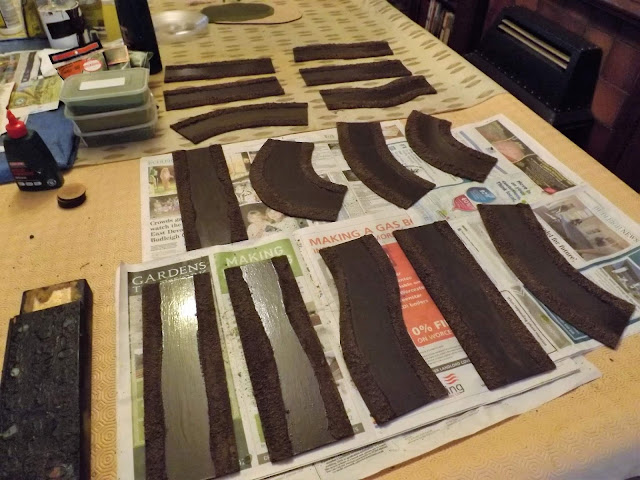 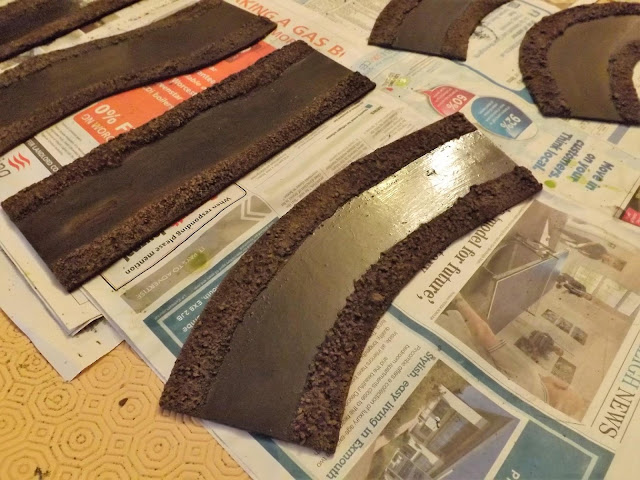 As we go forward I have plans to build some purpose built sections to include a ford or two and some bridge crossing points but a simple river is all I needed for the time being and I think they work really well on my table. 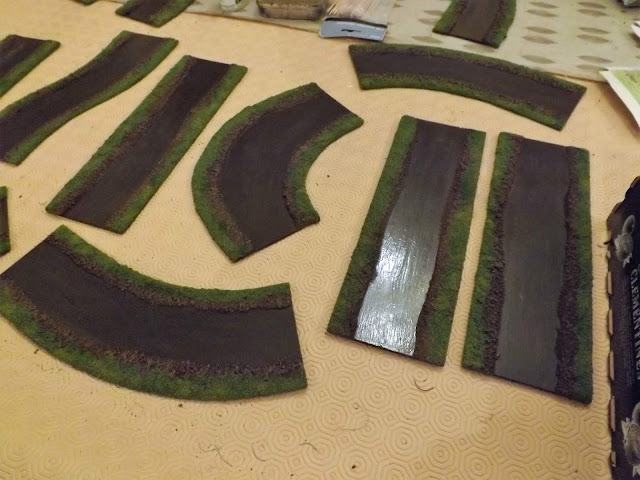 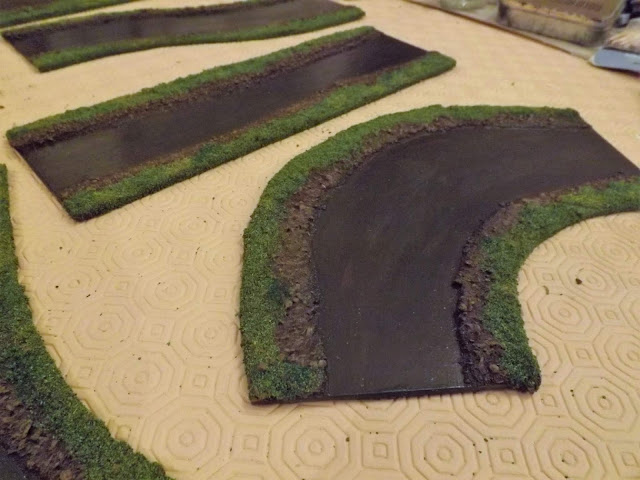 Did I mention the table? Well since showing off my new cloth from Tiny Wargames that has been waiting on table to greet the other terrain items I thought I would set the whole thing up ready for the first game featuring the new collection and recreating the 'Hold the Pass' scenario and table set up from Warlord Games' 'Romes Dacian Wars' Hail Caesar companion book, but first I thought I would show you the fixed up river sections out on the table. 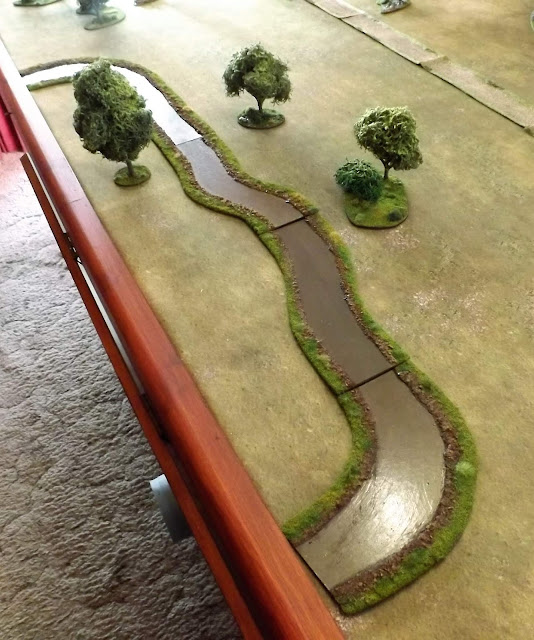 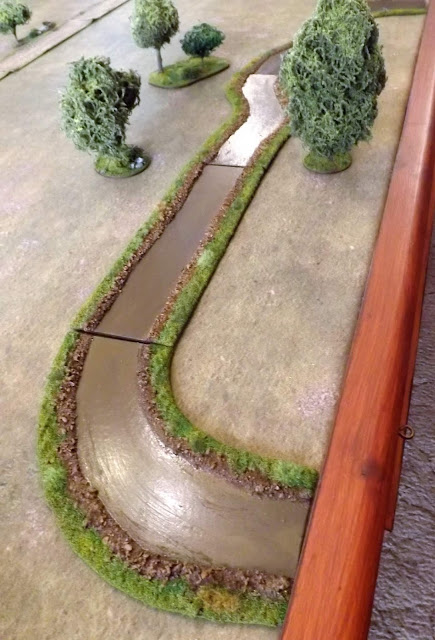 And finally the new look table with the fruits of my terrain building work for this year.

I am really excited about next year as with this foundation I can add to the figure collection to stage bigger and different games and gradually add more to the terrain to produce even more interesting tables. 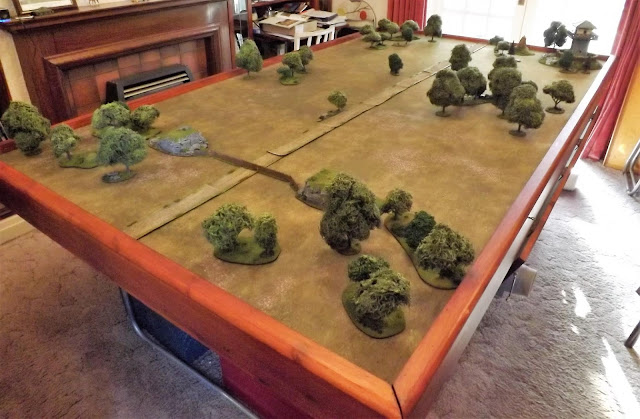 I'm really pleased with the look of the tree and scatter terrain with the the colours working really well with the new mat.

Tom and I have plans to start work on a set of modular hill sections that I will be able to place along the edges of the table to add a variety of height and to bring together to form complete low hills in the centre of the table. 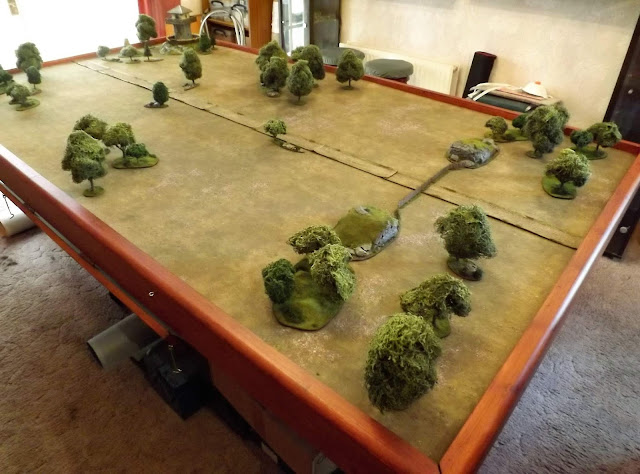 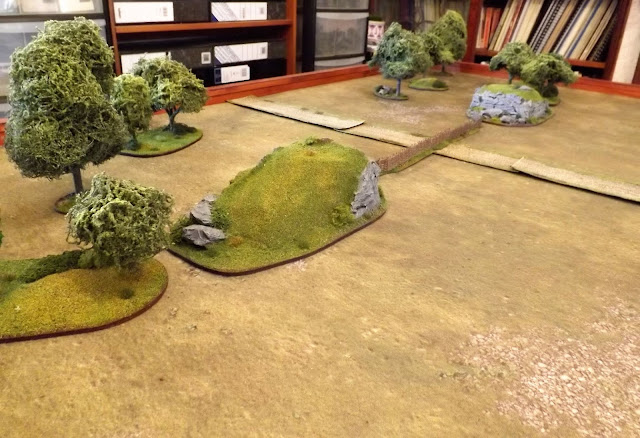 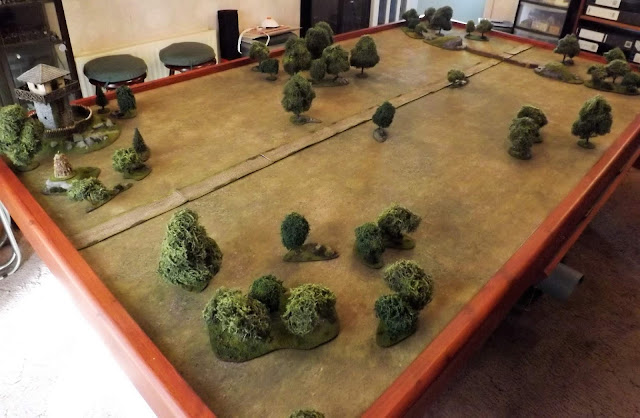 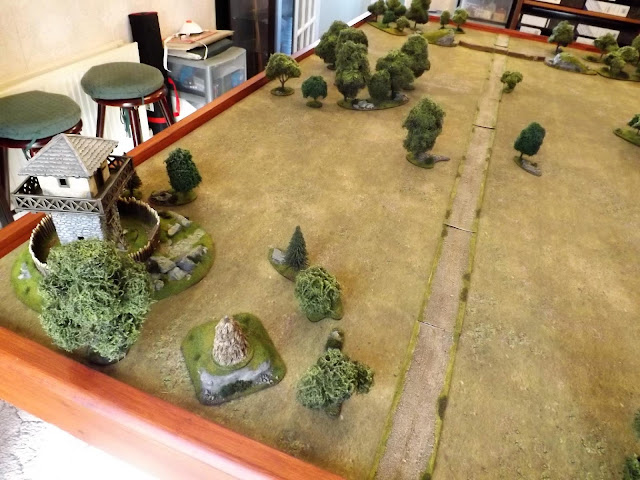 The next time I put up pictures of this table set up I hope to show the units out on it from the first game. 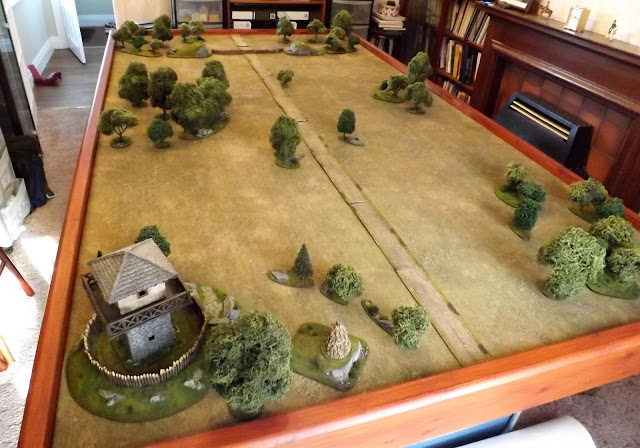 Next up, the Sarmatian Cataphracts are done.
Posted by carojon at 07:40