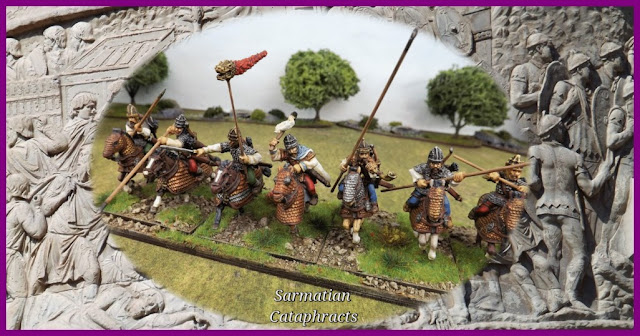 With focus in recent weeks very much on getting phase two of the terrain construction plan completed before Xmas I was also conscious that I needed to press on with phase two of the Romano-Dacian figure collection, following recent projects getting US cavalry, Plains Indians and Seven Years War British figures painted in time for other commitments.

So the new list of units is now up on my painting desk which I look forward to crossing off as each unit gets done - I know it's just my system and it's how my brain likes to work by rewarding itself by seeing an ever reducing list each time I sit down to paint! 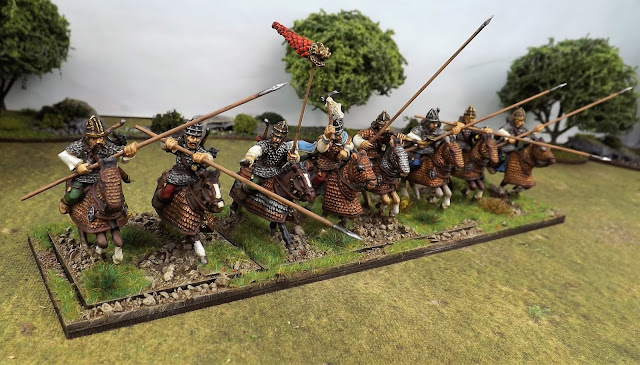 As well as another six Dacian warbands to be added to the six already done I need to get the first units of the very potent Sarmatian force set to compliment them and add that threat to my Roman forces.

That threat doesn't get much more potent that Sarmatian Cataphracts, backed up by horse archers and with six units of each to be built going forward and with a particular game in mind that requires at least two units of this formidable heavy cavalry I thought I would get started this side of the Xmas break, thus ending my 2018 on a nice painting high.

These cataphracts are from the Warlord range and very nice figures they are indeed with a little work required in their construction with hands to be drilled out for the various weapons and separate sword, bow and quivers to be affixed to torsos designed to be mounted on the legs and waist section of the figure already cast onto the horse. 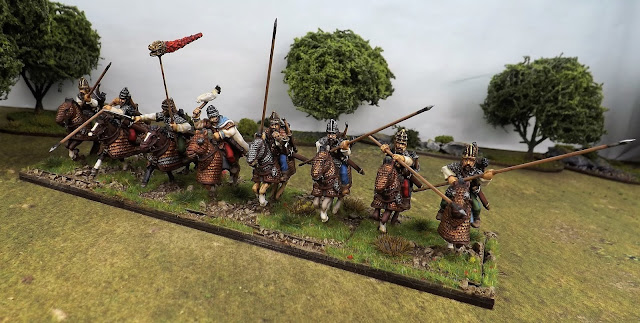 As in previous unit posts I thought it would be interesting to look at the capabilities of this one in 'Augustus to Aurelian' (AtoA) designed very much for shock particularly against Roman units already softened up by the horse archers they will operate with.

The first stat card below illustrates a basic cataphract unit as a small unit of eight figures, approximately equivalent to just two-hundred men, but heavily armed and armoured with the Kontos shown at the bottom of the card as a special characteristic. 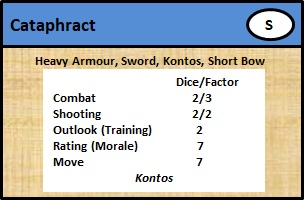 Thus this unit would normally roll two d10 when firing or in combat, using column three for combat and column two for shooting on the Combat/Shooting table seen below, cross referenced against the armour class of the target.

The 'Kontos' characteristic grants the unit an additional d10 in the first round of combat and your typical Legionary or Auxiliary cohort would count as medium armour with the occasional veteran or Praetorian cohort gaining heavy armour protection. 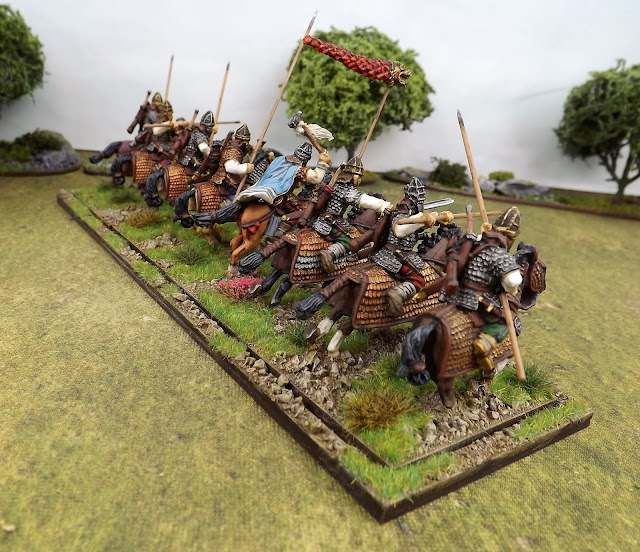 Thus we can see that a casualty will be caused for each score of 4 or less or 3 or less on a d10 for combat and shooting respectively before any column shifts are made to reflect the circumstances of the particular combat.


The morale rating of 7 is reasonably robust with a score on 2d6 plus or minus factors needed to be rolled less than to act as ordered.

The size of the unit means it is less able to sustain casualties and this is reflected in a rating of 2 meaning the unit will become 'shaken' once it has suffered two casualties or more. 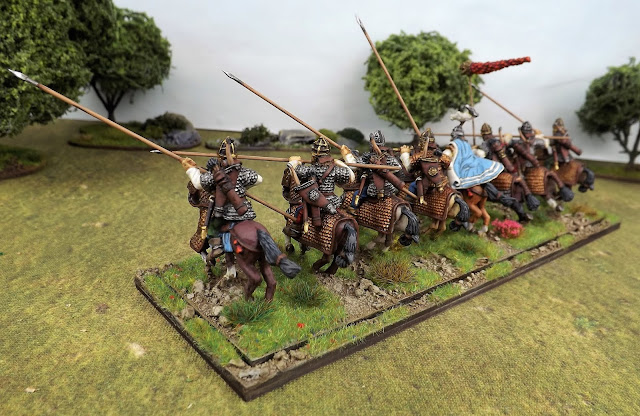 As can be seen from the explanation above the Noble Cataphracts hit harder and resist casualties slightly better and this would be a similar profile if we made the basic cataphracts veterans or 'hardened' as they would be classified in AtoA. 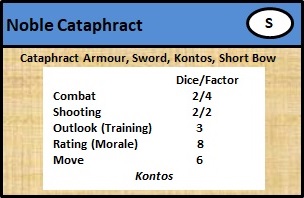 Noble Cataphracts if similarly classed as 'hardened would increase their Combat Factor to a 5 making them a real threat on first contact with the additional d10 thrown in. 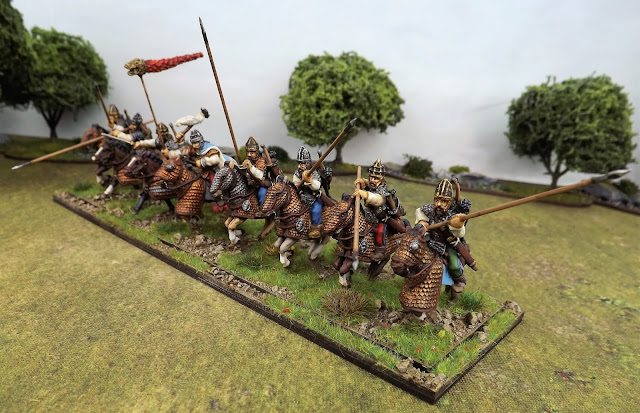 As well as packing a punch they are classed as heavily armoured or 'cataphract' as listed on the table, this meaning that your typical legionary cohort will be hitting in shooting and combat on the  '4' column needing '3' or less, before column shifts for circumstances, on 3d10 to knock one of these chaps out the saddle and auxilia tend to hit one less.

So these cataphracts with the heavy armour protection can equally take a punch which combined with the mobility that cavalry offer means that a Roman force has to treat these units with great respect whilst getting stuck into any Dacian warbands. 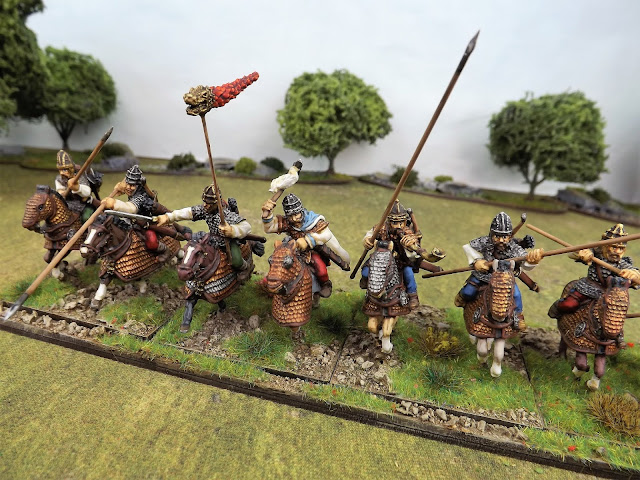 That said these units need to be used as designed, namely to take advantage of Roman units already discomforted by shooting casualties using their mobility to close on the enemy from the most advantageous position. The fact that they carry composite bows is also a great advantage to enable them to join in that softening up process with their accompanying horse archers.

Simply throwing these chaps in against steady Roman infantry may see them broken in short order if they suffer the slightest casualties, all be it that that is still a tough ask for the Romans. 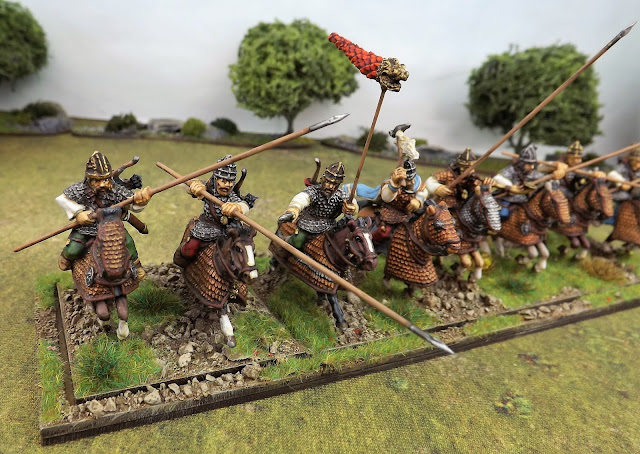 In time I plan to have forty-eight of these chaps in the collection backed up by a similar number of horse archers and light spear armed cavalry and they can take to the field from the early Imperium right through to the wars of Marcus Arelius and his Marcomannic Wars.
Posted by carojon at 23:19