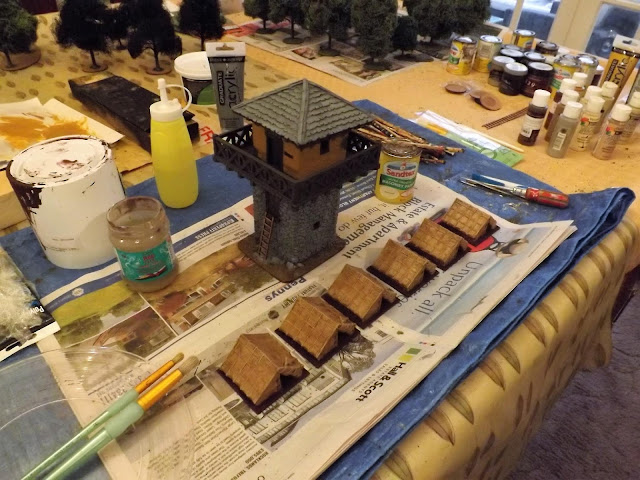 Terrain construction goes on apace here at JJ's with the second group of trees and scatter terrain under build incorporating the really large deciduous tree armatures from Woodland Scenics and copious piles of rocks.

As you will see in the first set of pictures, taken earlier in the week, only half the trees got their foliage before I ran out of scatter so put the second batch on hold awaiting a resupply and got started on the Roman marching tents and watch tower models from Baueda and Magister Militum
https://www.magistermilitum.com/type/camps-and-tents/28leg-roman-legionary-tent.html 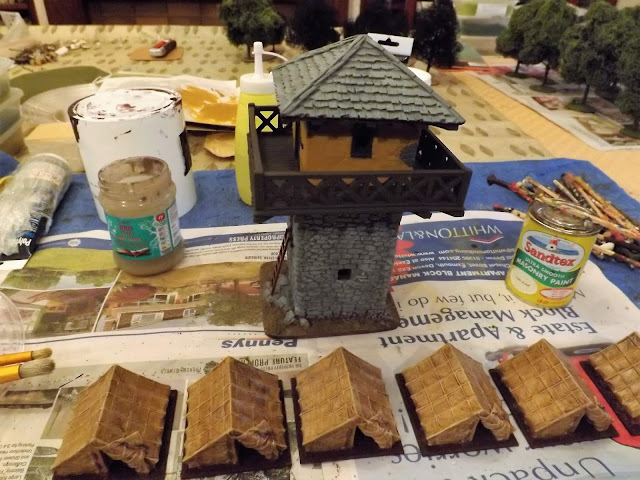 The watchtower has just had its first block coat colours applied to a black primer and I have started the dry brushing with the lower stonework.

I added an mdf ladder that Martin at Warbases kindly let me have as a sample and once trimmed down fitted perfectly with the tower door.

The tents are done and have just had groundwork applied to the bases and are drying. 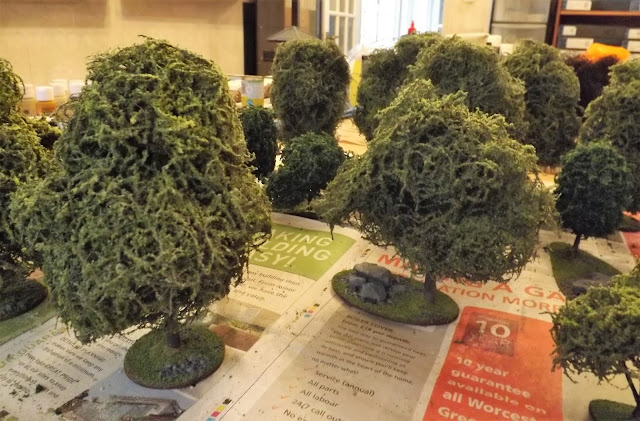 The two groups of large trees were at this stage at different points in their build with the first batch seen above just awaiting added foliage to the ground work before sealing. The second group at this stage were put to one side having had the rubberised horse hair substructure attached and primed and now awaiting foliage scatter before attachment to and work done to their respective bases.

The  next set of pictures is from this weekend with both sets of trees with foliage and the group that were delayed all based up and drying before adding the ground scatter and foliage so that I can seal all the pieces in one job rather than doing them in separate batches. 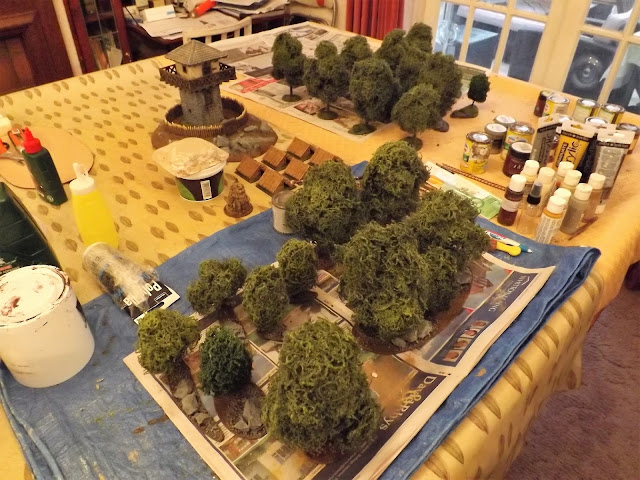 The tower is painted and varnished and just needs the ground scatter sealing and I was thinking about scratch building a hill stockade to mount it on but decided to treat myself to one from Grand Manner this week, having sold my 7th Cavalry and Indians to Steve in Sheffield - Thanks Steve, if you read this you can see your purchase was put to good use and reinvested in the hobby with this stunning model.

The stockade enclosure is one mighty and very solid piece of resin and only arrived on Friday and by Sunday afternoon I have done the basic paint job which is drying before I seal it with a spray varnish before moving on to the ground scatter which will marry it in with the tower itself. 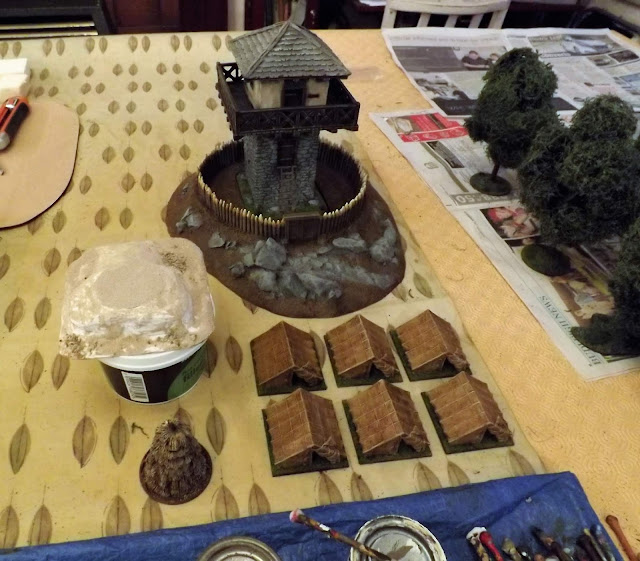 In the picture below my first batch of trees have now had their ground foliage done, namely vushed and shrubs added to the rocks and grass tufts to the open areas. 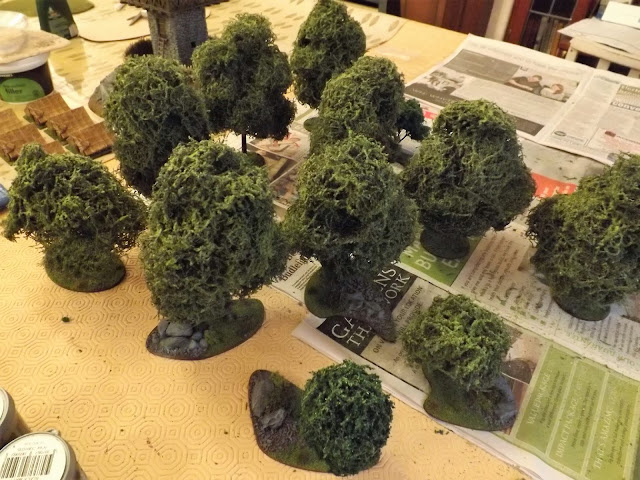 As well as treating myself to the stockade I also thought about scratch building a signal beacon but again opted for the quicker option by including one in my order to Grand Manner. 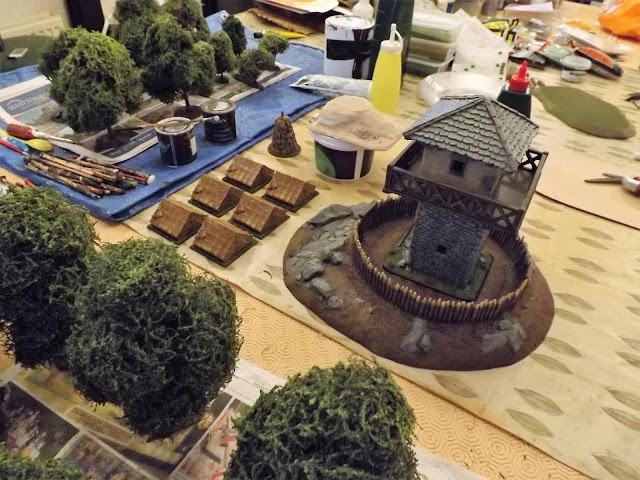 I only placed the order last weekend and the chaps at Grand Manner turned it around in the week despite all their likely orders being processed for the Xmas break, so thank you chaps, much appreciated.

The signal beacon is painted and ground texture has been applied to its base ready for some ground scatter to be applied.

I really felt though that it needed something extra to complete the look so have scratch built my own rocky outcrop, pictured below, up to which the Romans have added an earth ramp and on which my beacon will sit close by to the watch tower. 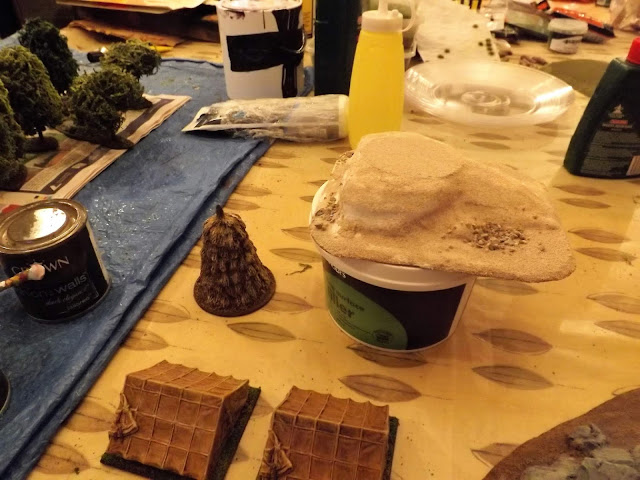 Hopefully all this work should culminate in the first game with a table starting to look the way I had envisaged and giving that Danubian frontier look on which my Romano-Dacians will hopefully look very at home.

Speaking of Romano-Dacians, my first unit of Sarmatian Cataphracts are approaching completion with all the block painting done and the first highlights ready to be applied, which is always fun seeing those initial colours start to 'pop' but I will save the beauty shots until they are finished.

I am really looking forward to getting this terrain build session finished and returning the room back to a semblance of order so I can get on with the next stage of room adjustments as the Napoleonic collection gets a new storage home and makes space for more terrain.

More stuff to come including Royal Marine Training in WWII, Mr Steve and I completing our Three Castles expedition, a visit to historical Taunton and after the Xmas break a look back over the last year and announce some really exciting plans for 2019, plus I will see if we can get the terrain out on the new look table once its done to show it in its normal habitat rather than in the build phase.