I had been aware of special operations stay-behind units that operated in Britain during WWII but had never really taken my interest much further than reading the odd article about them or seeing the occasional news item on local television.

Thus when the opportunity came up to attend a village hall presentation by Andrew Chatterton, and his team from C.A.R.T. (Coleshill Auxiliary Research Team) at Newton Poppleford here in East Devon and just up the road from my home town of Exmouth I was really interested to learn more about this highly trained clandestine military unit.

In the dark days of 1939 and 1940 Britain faced the Nazi threat with ever decreasing allies as one by one friendly countries in Europe were overcome by the German military machine.

Eventually the country stood alone facing the serious threat of invasion itself but with the advantage of having seen what had happened in the countries of its former allies and given an opportunity to make preparations should the worse happen and German troops land on the shores of Britain.

Perhaps inspired by a Prime Minister who actively encouraged their development, or a situation that demanded different ways to hit back at an all conquering land power such as Nazi Germany, the country became a leader in setting up special elite military units for raiding and commando type activities and under the guidance of a certain Captain Peter Fleming, Mike Calvert, Royal Engineers and detachments from the Lovat Scouts, the first units of what would become Britain's resistance army was trained in Kent as early as June 1939 and setting the pattern of seven man guerrilla patrols trained in all manners of sabotage and to operate behind the lines of an invading army

Fleming, the brother of Ian the author of a certain Commander James Bond in post war years had already gained experience operating against the Germans in the invasion of Norway.

Fleming's new command was further bolstered by the appointment of Colonel Colin Gubbins by Churchill in July 1940 to command the auxiliary units, a very experienced officer in clandestine operations from conflicts ranging from his service in Ireland in the 1920's to the Russian Civil War and like Fleming service in Norway, thus the Auxiliaries were a consolidated part of British anti-invasion plans under two very effective leaders.

The units were trained at General Headquarters, Coleshill near Swindon in Wiltshire and as well as training the auxiliary personnel they also oversaw the training of the members of the Special Duty Units consisting of ATS wireless operators and members of the community, such as vicars, doctors and even girl guides, recruited to spy on German activities, and trained to identify key German personnel and units for forwarding the information on to the British regular forces via the wireless operator networks. Interestingly and for greater security, although both part of the Auxiliary Units neither the patrol members or the special duty personnel were made aware of the other and operated quite independently from each other.

The training centre at Coleshill would eventually train up a force of 3500 personnel operating around the country unknown to their friends or families and ready to perform their specific roles on the event of a German invasion.


The units themselves were, as mentioned, formed in 'patrols' of six to eight men recruited locally for their knowledge of the area and skills they already possessed that would make it easier for them to live off the land undetected behind enemy lines. The recruitment or Intelligence Officer for East Devon was Captain J.W. Stuart Edmundson seen in the picture above.


There were thirty-two patrols established in East Devon, Number 6 Group commanded by Captain S. G. Woods and as at Newton Poppleford and nearby Farringdon, they were based just inland from the coast operating, when the time came, from secretly dug and prepared underground hides, known as 'operational bases'.

These bases were somewhat unique in design but had aspects common to all of them such as a disguised entrance, an escape tunnel, a chemical toilet and a blast wall between the entrance and the living quarters to protect the occupants from a German grenade attack should the enemy discover the entrance.

Many were constructed during the early part of the war by Royal Engineers brought in from other areas of the country to ensure the secrecy of the location after they were built.


The lifting of the official secrets restriction on these units in 1998 has revealed the names and addresses of the men in the operating areas allowing a picture of where likely bases were established and revealing that the men would have likely known each other hailing from farmers and farm workers to gamekeepers and poachers, all with a good knowledge of the local landscape and how to live off it

In the event of invasion and the church bells ringing, the men dressed as members of the local Home Guard were to leave their homes and families and make their way undetected to their operational bases where they would disappear and prepare to liquidate certain members of the local community prior to the Germans arriving.

Somewhat controversially, patrols were issued sealed lists of names of people that had to be killed before the Germans arrived to prevent them either revealing the presence of the patrol members under torture or to remove likely known collaborators, thus local police commanders and even the East Devon Commander, Captain Woods would have been at risk from these men, and research has revealed that an elderly couple living close to a patrol base in Cornwall were to be killed immediately following a German invasion just in case they had observed patrol members previously moving about in the area.


The bases were established in areas where they would often have commanding views of the local countryside together with nearby observation posts where likely routes of enemy troop movements could be monitored and decisions made to attack railways, bridges and airfields.

The units were highly trained in close combat and sabotage, possessing the latest and best small arms suitable for their work together with vast amounts of explosives, commercial and the latest plastics, and ammunition, both of which would have been stored in separate caches away from their bases.

Interestingly the patrols were only issued rations to last two weeks indicating the likely life-expectancy of these units once they drew attention to themselves through their activities to the occupying German units.

In addition each man was issued enough tablets to either treat the pain of wounds received or to end themselves and avoid capture, and a jar of rum for each patrol to be used as required on active service or returned sealed at the end of the war but very often done so containing liquid that certainly wasn't rum!


As I know from my own parents, the WWII generation believed in keeping official secrets long past any threat to the country even if they had been revealed, and so it was not until 1968 that the first knowledge of the Auxiliaries came into the public realm.

However many former members have since passed away taking their secret role during the war with them to the grave and thus much information about the various patrols operating around the country and the specific members who served with them is still to be uncovered, particularly when it comes to finding where the Operational Bases were built together with their associated observation posts. 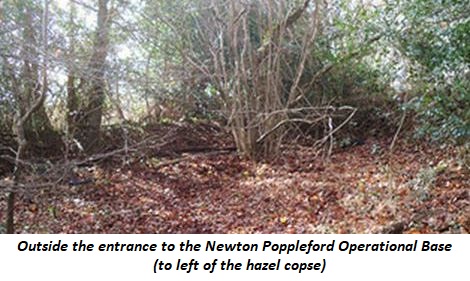 The Newton Poppleford base seen in the pictures shown at our presentation is a rare survivor although in a poor state of conservation and showing signs of having been used as a rubbish dump by somebody.

The picture below shows that the patrol seem to have started to work on constructing an escape tunnel but had given up the job, perhaps due to the ground being two hard to dig through and thus trusting to not being discovered. 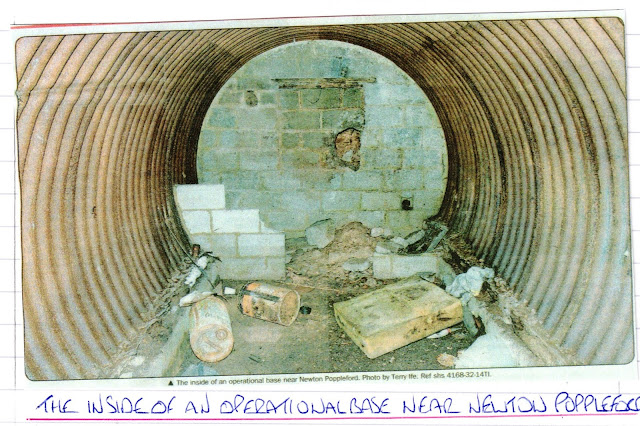 The members of CART came together in 2009 with many of their number made up of family members of former auxiliary service personnel and are dedicated to get greater recognition for this elite organisation that in the end was not called on to serve in the role for which they were trained and prepared to sell their lives dearly for.

That said many members of the Auxiliary Patrols were able to make use of their skills with later service in the SAS operating in North West Europe following D Day and to aid the resistance forces in occupied countries to support the allied armies in ejecting the German occupiers.

The work of CART has started to shed even greater light on the Auxiliaries across the country but much still needs to be revealed and even in my own local, the operational bases at nearby Axminster, Seaton and Beer still remained to be discovered and the active personnel in the various patrols identified with certainty to allow their service to be recognised by the nation.

With the passing of the generation that served we are now left with us 'baby-boomers' who might recall as children playing in a hideout we discovered hidden away on a nearby piece of common land or someone who works in the countryside who knows where one of these likely historical sites can be found and CART would very much like to hear from you if that is the case so they can investigate further and hopefully update the record.

If this post has fired the imagination from a wargaming perspective or from an historical one and a keeness to support the work of CART then you can get more information from their web site in the link below which has some excellent background information and from where CART kindly gave me permission to select some of the pictures for this post.

http://www.coleshillhouse.com/
Posted by carojon at 02:02