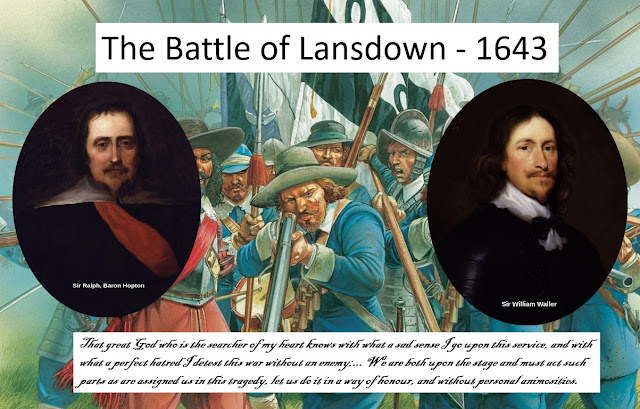 As the Cornish pike fought to hold their ground, the Cornish musketeers joined their comrades on the ridge together with supporting Royalist cavalry, among them Richard Atkyns esquire who left the following account of the action that followed;
'As I went up the hill, which was very steep and hollow, I met several dead and wounded officers brought off; besides several running away, that I had much ado to get up by them. When I came to the top of the hill, I saw Sir Bevill Grinvil's stand of pikes, which certainly preserv'd our army from a total rout, with the loss of his most precious life: 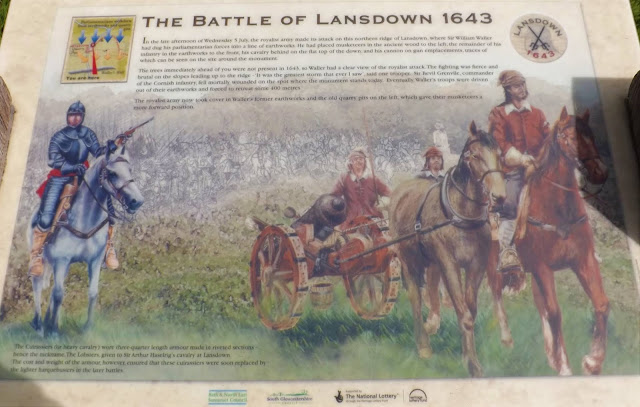 They stood as upon the eaves of an house for steepness, but as unmovable as a rock; on which side of this stand of pikes our horse were, I could not discover; for the air was so darkened by the smoke of the powder, that for a quarter of an hour together (I dare say) there was no light seen, but what the fire of the volleys of shot gave; and 'twas the greatest storm that ever I saw, in which though I knew not whether to go, nor what to do, my horse had two or three musket bullets in him presently, which made him tremble under me at that rate, that I could hardly with spurs keep him from lying down; but he did me the service to carry me off to a lead horse, and then died: 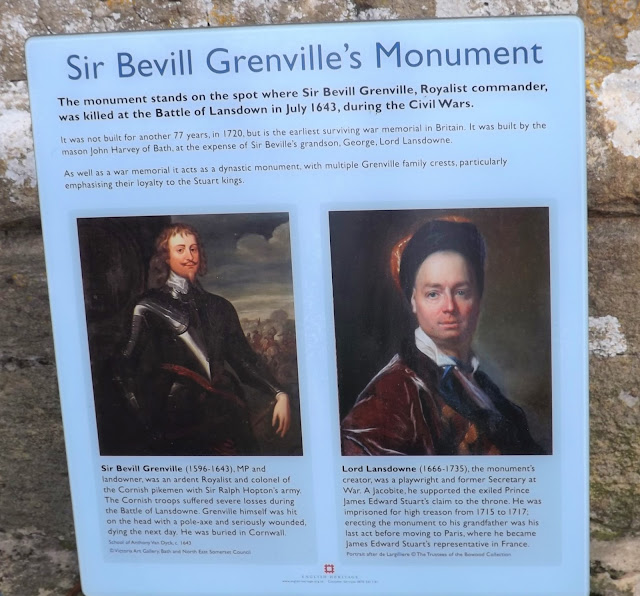 By that time I came up to the hill again, the heat of the battle was over, and the sun set, but still pelting at one another half musket shot off: The enemy had a huge advantage of ground upon our men, for their foot were in a large sheep-cot, which had a stone wall about it as good a defence against anything but cannon as could be, and ours upon the edge of the hill, so steep that they could hardly draw up; 'tis true there were shelves near the place like Romish (Roman) works, where we quartered that night, but to shallow that my horse had a bullet in his neck: 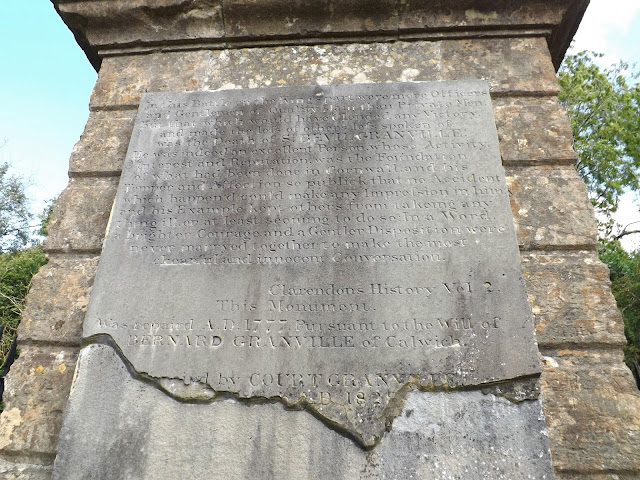 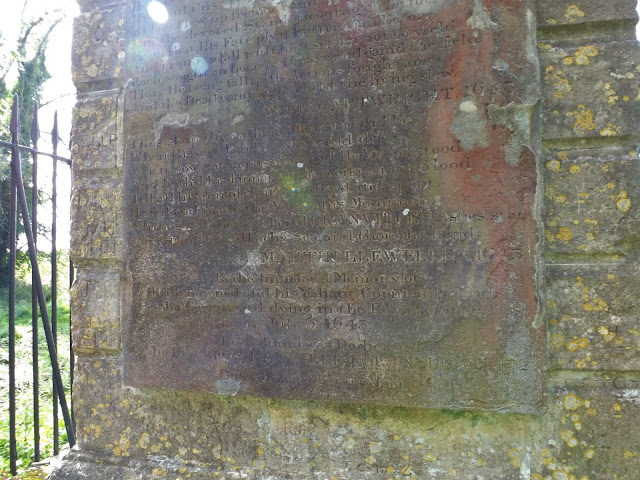 We pelted at one another till half an hour before day, and then we heard not any noise, but saw light matches upon the wall, which our commanders observing sent one to discover whether they had quit the field or not, who brought news that they were gone.' 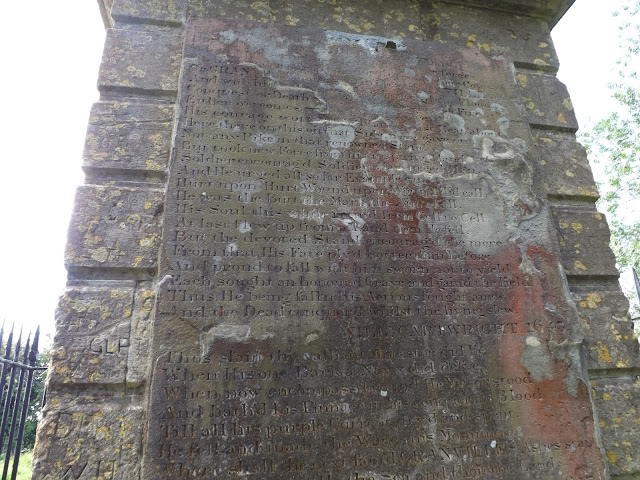 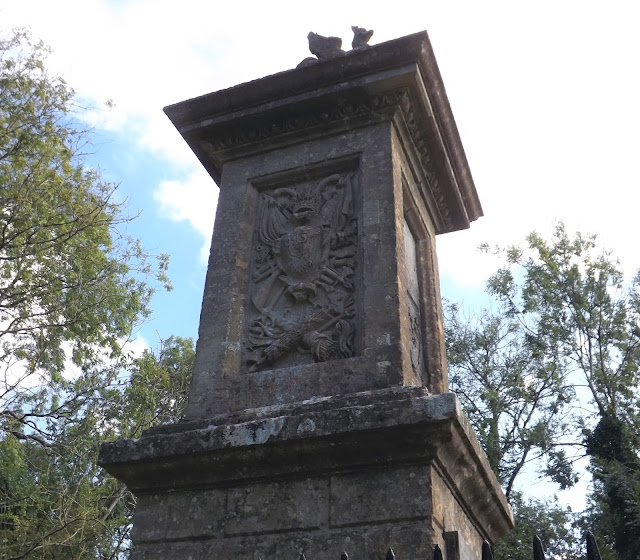 As darkness brought the battle to a close leaving the exhausted Royalist army clinging precariously to its hard fought for gains atop the ridge, Waller's army departed for Bath whilst Royalist Commanders considered what to do should they suffer another counterattack with, it seems, little confidence that the army would stand.
They were not put to the test, and with the Cornish foot scornfully referring to their mounted comrades as 'runaway horse', having suffered the loss not only of their commander but 200 dead and perhaps 300 wounded, compared to reportedly just twenty men lost in Parliamentary ranks, the Royalist had to cope with one final drama to end a somewhat Pyrrhic victory, if you could even call it that.
As the Royalists comforted themselves with having captured 400 arms and ten barrels of powder after the Parliamentary retreat, despite being no nearer to capturing Bath, they had the final drama of the next morning and the injuring of their commanding general, caught in the explosion of an ammunition cart as he was close by.
Richard Atkyns described the affair;
'Lord Hopton, who was then viewing the prisoners taken, some of which, were carried upon a cart wherein was our ammunition; and (as I heard) had match to light their tobacco; ... I had no sooner turn'd my horse, and was gone 3 horse lengths from him, but the ammunition was blown up, and the prisoners in the cart with it; together with the Lord Hopton, Major Sheldon, and Cornet Washnage, who were near the cart on horse back, and several others: It made a very great noise, and darkened the air for a time, and the hurt men made lamentable screeches. As soon as the air was clear , I went to see what the matter was: there I found his Lordship miserably burnt, his horse sing'd like parch'd leather, and Thomas Sheldon (that was 2 horse lengths further from the blast) complaining that the fire was got within his breeches, which I tore off as soon as I could, and from as long flaxen head of hair as ever I saw, in the twinkling of an eye, his head was like a blackamoor; his horse was hurt, and runaway like mad, so that I put him upon my horse, and got two troopers to hold him up on both sides, and bring him to the head quarters, whilst I march'd after with the Regiment.'
Sir Ralph Hopton was described as 'a miserable spectacle, his head swollen as big as two heads and his eyes near burnt out.' 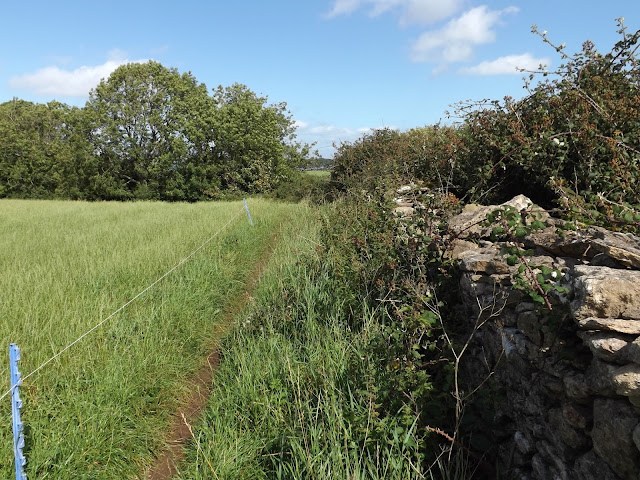 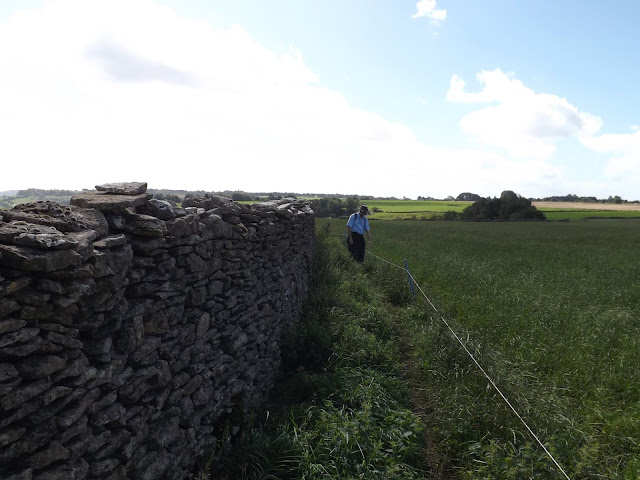 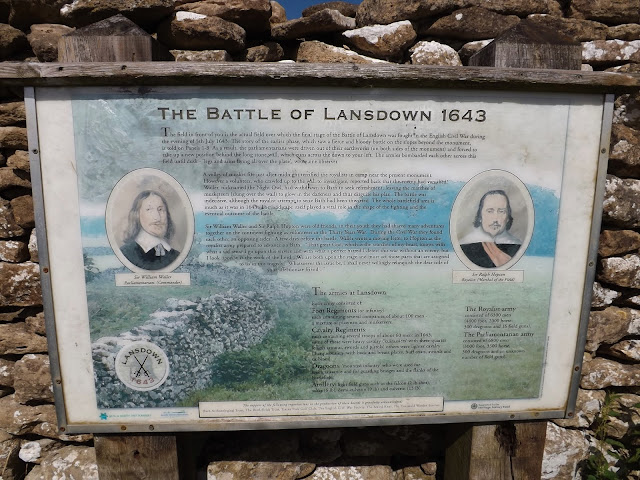 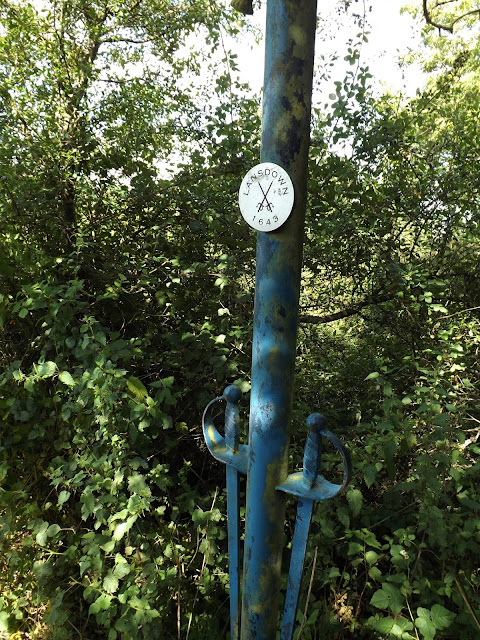 Point 5 - The Extreme Left Flank of the Parliamentary Line 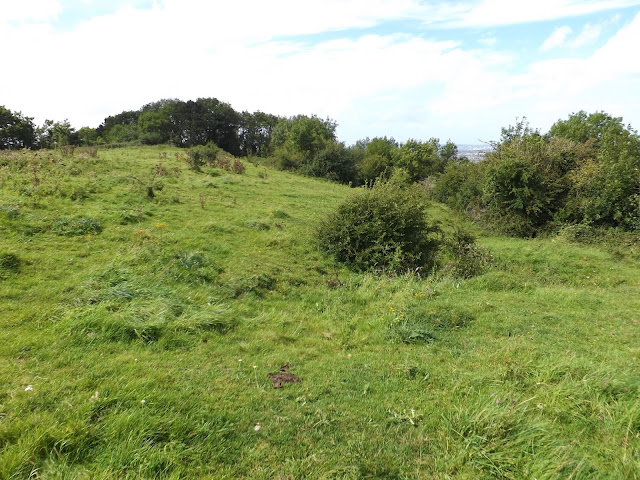 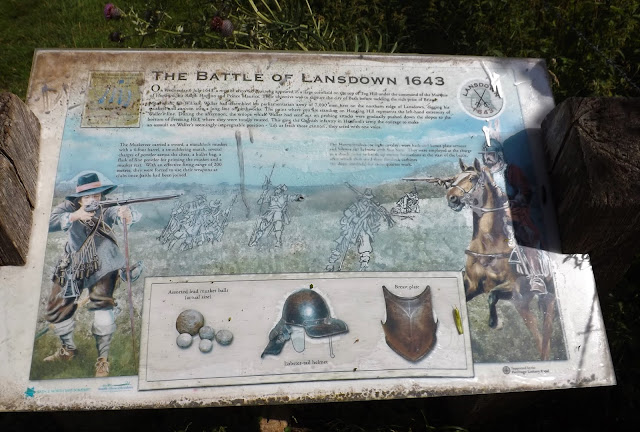 With a very pleasant break for lunch gazing out from Hanging Hill towards Bristol and the River Severn we decided to work our way around Bath to see if we could discover the place on the River Avon close to Claverton where Waller's men crossed to intercept and ambush the Royalist army as it marched north around the city from Bradford on Avon on the 2nd July 1643.
The Reverend T W Jex Blake, Dean of Wells account (link included in the sources below) made interesting reading in describing the events that led to the skirmishing between Monkton Farleigh and Claverton.

Point 6 - Monkton Farleigh and Claverton, The Skirmish on the Avon, 2nd July 1643

Lord Hopton's Account of the Movements of the Royalist army 1643.
'Upon Sunday, the 2nd July, the army advanced to Bradford, where they had a passe over the River Avon at their command, and were on either side within 4 miles of the enemy's quarters. The same night Sr Wm. Waller advanced a great part of his army, both horse, foot and dragoons over the River under Claverton-house, where besides the ford, he had made a bridge, and a redoubt on his side to defend both, reserving the other part of his army with his ordnance in Battalio on Claverton-Down.
With this part of the army so drawn over the river, he advanced in the night and possessed himself of the high-ground at Munckton-Farly and laid an ambuscade in a woodland-walled ground in the foot of the hill, and so in the morning he advanced strong parties of horse; upon their out guards of horse, which being then strong and well commanded by Major Lower, he held them up till the whole army drew forth, which then in good order both horse and foot advanced towards the enemy.
The Cornish foot in an hour or two beat the enemy out of their ambuscade, and then both foot and horse advanced upon their main-body on the top of Munckton-Farley hill, where they durst not to stand them and so they had the chase of them as far as Bathe-Easton. In which chase and not before they discovered Sr Wm. Waller with his main body on the other side of the water on the top of Claverton Down with his bridge and his work before mentioned.
Hereupon Prince Maurice turn'd the main of the force of foot to gain that pass which he did just as it was night, and so Sr Wm. Waller in the dark retreated into Bath.
Driving to the hamlet of Monkton Farleigh where the Parliamentary force laid in wait among the woodland for the Royalist army we followed the road aptly named 'Sally in the Wood' down into the valley of the River Avon towards Claverton.
Over this ground the Cornishmen chased the ambush party of Colonel Robert Burghill back to the bridge and redoubt, before Prince Maurice called a halt to matters and turned the Royalist army back to Monkton Farleigh and the race north to beat Waller's army to the dominating high ground of Lansdown Hill, a race they lost. 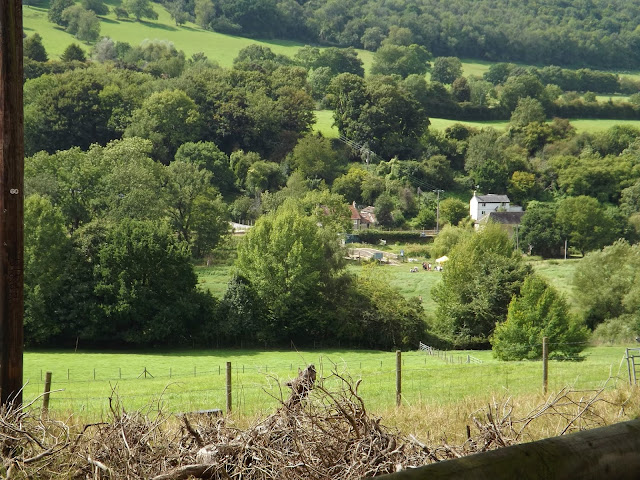 With the afternoon drawing on and a two hour drive home we decided to make our way back to the motorway via Bath race course, close to which can be seen the remains of a Roman marching fort in the ploughed field beyond.
Bath is very much a Roman town who took great delight in their discovery of hot water springs in the Avon valley that provided naturally sourced hot spa water to their own purpose built bath house built around 60-70 AD in what was known to the Romans as Aquae Sulis in deference to the Celtic goddess of the spring, adopted by them as Sulis Minerva.

Thus with an early Roman presence in the area it should be no surprise to discover the remains of their military activity and the classic playing card shape of a typical Roman marching fort proved too good a distraction to our journey home to be missed.
After circuitously making our way around the edge of the race course we managed to find an access point to our target field with the view of the clearly defined earthwork boundary obvious set among the yellowing wheat.
On carefully following vehicle tracks through the field so as not to damage the crop we made it over to the embankment where I took the pictures you can see of the interior which we estimated would likely accommodate a cohort sized unit of about 4-500 men and their supporting vehicles and equipment.
Its so pleasing to see that this ancient monument lies so well preserved in the agricultural landscape, giving a marked impression on the size of this sort of field work, together with the skill taken in its creation with straight sides still evident today and the remains of the fosse and embankment well defined. 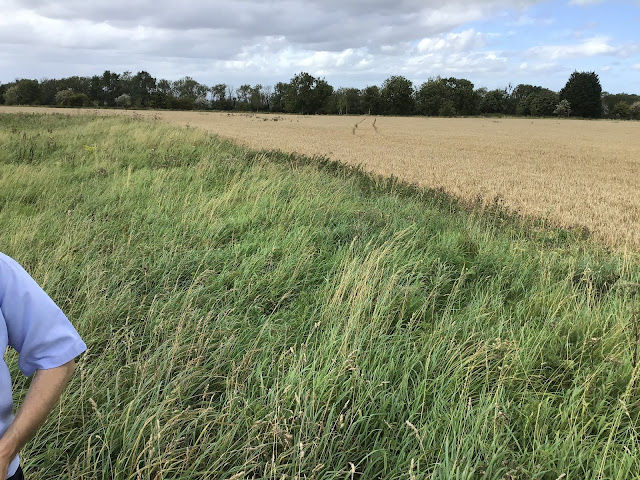 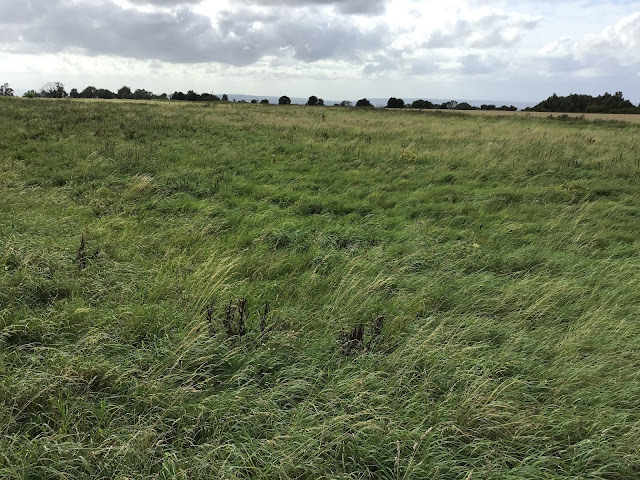 So there we are, our first walk of a somewhat unusual 2020 and with plans to get another one in for next month.
Sources referred to in this post:
The Civil War in the South West - John Barratt, Pen & Sword Books
Roundhead General, Campaigns of Sir William Waller
http://bcw-project.org/military/english-civil-war/west-country/battle-of-lansdown
http://www.battlefieldstrust.com/resource-centre/civil-war/battleview.asp?BattleFieldId=21
https://thebathmagazine.co.uk/history-the-battle-of-lansdown/
https://sanhs.org/wp-content/uploads/2019/11/08JexBlake.pdf
The Vindication of Richard Atkyns - Pdf
Posted by carojon at 07:25