Following a request for more information on the bases I use for my figures, I thought it might be helpful to post this link to Mike Whitaker's basing guide PDF 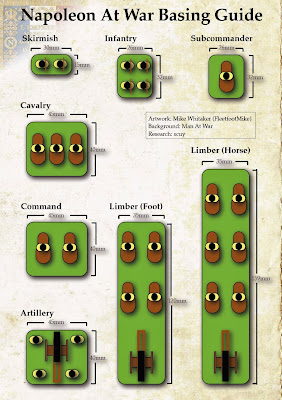 You can buy plastic bases for the Napoleon at War system, but I get mine cut in MDF and I like the look so have continued getting them cut to order. The bases work equally well for other systems and as you can see I use them for Carnage & Glory II games I have run.

The standard battalion would be six infantry bases with two skirmish bases. A light infantry battalion would be the same but with two extra skirmish bases. A standard cavalry regiment would be four cavalry bases. An artillery battery would be three bases plus a limber for my British and four bases plus a limber for my French (three bases for French Horse artillery batteries).

The command bases work to a common theme with a brigade commander mounted singly on an infantry size base, a divisional commander plus aide on a cavalry base and then you add another figure for a corps/army commander.

The basing system produces a "grand manner" look to the units and, as I say, is flexible enough to be used for other systems
Posted by carojon at 00:42