Wavre and the Prussian march to Waterloo - Belgium 2015 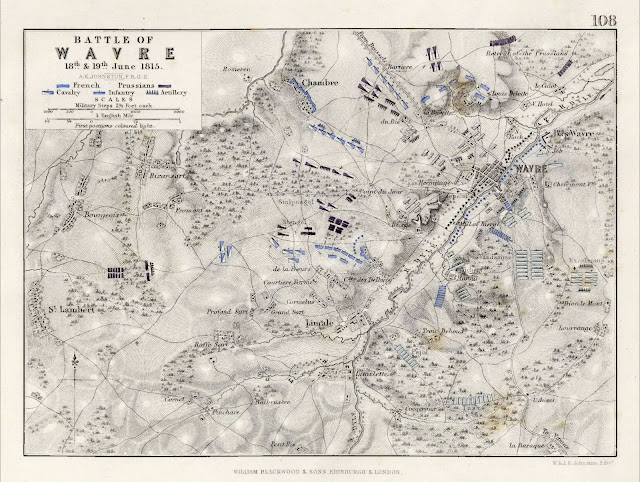 In my previous post covering the Battle of Ligny, I inadvertently left out some of the identifying point numbers from the map that showed where particular views were taken. I have updated that post so if you came away unsure of what you were looking at and from where, you might want to have another look. Sorry about that.

So back to our journey from Ligny to Wavre following in the steps of Marshal Grouchy.

Prussian General Thielemann and the 15,200 men of III Corps were given the difficult job of tying down the 33,765 French troops under Marshal Grouchy as General Blucher took the other three Prussian corps over the hills on the ten mile march to support Wellington in his battle with Napoleon.

Based on a huge amount of hindsight which is a lot more to go on than any of the actual commanders had; it seems strange that Blucher didn't leave two of his corps at Wavre that should have been sufficient to deal with Grouchy whilst taking Bulow's and another over to Waterloo. This option would have been one more corps than the Duke of Wellington requested and still sufficient numbers to affect the final outcome of the battle. Another great what if from history from another sitting room general.

The force multiplier that Thielemann was able to make full use of for most of the afternoon was the River Dyle that together with some well placed barricades and liberal use of loop-holed walls was able to frustrate Grouchy's force and hold them in place as events elsewhere rendered the battle of Wavre unimportant in the grand scheme.

Eventually Grouchy's numbers told and by attacking on less defended points, a crossing was made forcing the Prussian corps back and away from the river. But with the time it took the French to win the battle at Wavre, General Thielemann had gained a strategic victory and Grouchy would end up in full retreat to France and condemned to defend his choices on the 18th June for the rest of his days. 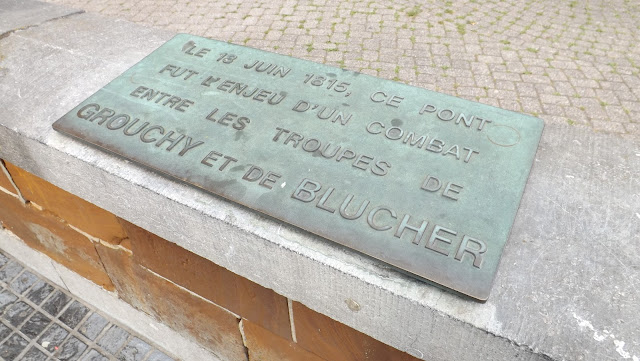 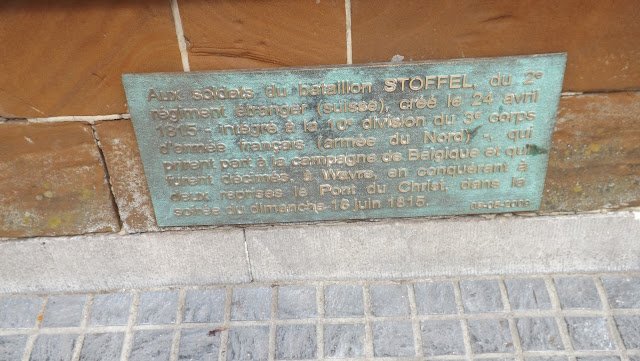 As Thielemann made his dispositions around Wavre, the other three Prussian corps set of west at about 04.00 in the early dawn of the 18th June led up the hill to Pont du Jour by Bulow's corps, where at the split in the road Zeithen led off I Corps to join up with Wellington's left flank. Our journey would follow Bulow's and Pirch's corps on the southern route to Plancenoit.

The route through this pretty hilly countryside is winding and twisting with occasional steep gradients to negotiate and on un-metalled  roads must have proved quite a challenge particularly to the artillery drivers. As you will see parts of the route remain as they were in 1815, just muddy tracks over the high ground.

Passing close to Bierges and the Mill attacked by Hulot's division we came upon a house bearing a plaque commemorating the fighting in this area. If the French had attacked here earlier, they may have seriously affected Blucher's march and eventual support for Wellington.

The map above shows the route of Bulow and Pirch covering the next four pictures as we picked our way along narrow side roads to the River Lasne.

The River Lasne, and specifically the little bridge crossing it, caused a two hour delay on Bulow's march explained by various commentators as the result of this natural choke point combined with the weight of traffic and muddy road conditions which were bound to cause problems.

David Chandler lays the blame on Bulow and Gniesnau, suggesting that the Lasne was the Prussian "Rubicon". Once crossed they were committed to supporting Wellington and it seems that it took a frustrated Blucher to take control and order the march to continue at best possible pace. 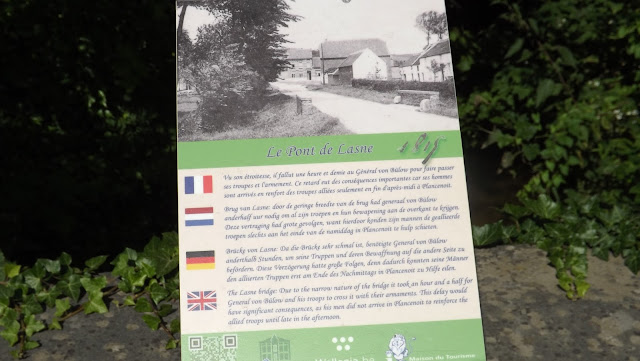 As you can see the Lasne is not as significant a linear obstacle as the Dyle so it makes an interesting debate as to its significance on the reported delay.

As we passed the Lasne and climbed the hill out of the village on the road to Plancenoit we were entering no man's land patrolled by the French light cavalry of Domon (4th, 9th & 12th Chasseurs) and Subervie (1st & 2nd Lancers and 11th Chasseurs) , backed up by Lobau's corps which halted to the west of the Paris Wood. These forces were sent by Napoleon to cover his flank at about 13.30 as reports of the Prussian approach was brought to his attention.

These first contacts in the mid afternoon of the 18th June are commemorated by a stone column in the corner of a field surrounded by a laurel hedge marking the final resting place of Colonel Schwerin killed in these early exchanges.

Colonel Schwerin commanded the 1st Prussian Cavalry brigade, two regiments of which (6th Hussars and the 1st West Prussian Uhlans) were with him as the Prussian advance guard climbed the hill up from Lasne on to the plateau ahead of the Paris Wood. They had already had several running skirmishes with the French pickets from Marbot's 7th Hussars, when they came under fire from the tree line. The French had brought up a battery of horse guns in support and Colonel Schwerin was killed by the first rounds as he attempted to get forward and assess the situation.

Two years later the Colonel's wife retrieved his body and the remains were reburied under the commemorative column you see today. 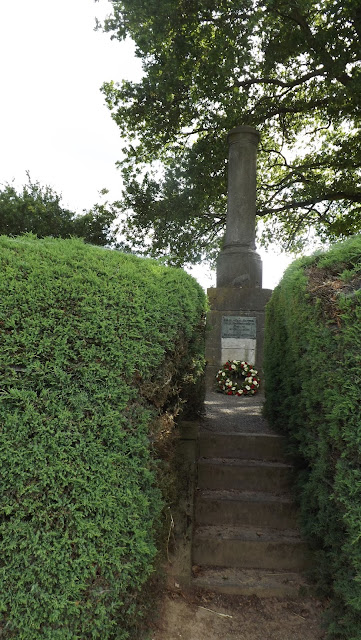 The final stage of our journey was perhaps the most interesting as we left the tarmacked road and continued along on what we would call a "green lane" in Devon.

These old routes have been used over centuries and enable the history buff to get a real feel for the conditions of the roads two hundred years ago. The muddy ruts would have been a common sight back then and would have added to the fatigue suffered by the Prussian troops marching since 04.00.


Suddenly we crested a ridge and I became immediately aware of the significance of the view and a sense of the euphoria, Blucher and his Prussian troops must have felt.

There was the Lion Mound off to the right indicating Wellington's line and what would have been the open right flank of a French army heavily committed to battle with by now little in the way of reserves. For Blucher, after all the years of struggles and the numerous defeats inflicted by Napoleon, it must have been like all his Christmas' come at once.

By 17.00 Bulow had driven Lobau's troops off of the plateau and by 18.00 was preparing to assault Plancenoit.

From the Prussian position it is difficult to see  how close Plancenoit is to Napoleon's rear area and I guess the troops involved pushing Lobau's corps back into the town and out of it would only have been aware when they in turn were driven back by the Young Guard as the fighting here became a too and fro affair as Napoleon desperately tried to deal a knock out blow to Wellington as he fended off this threat.

At 18.00 the first all out assault on Plancenoit began with six Prussian artillery batteries bombarding the village followed in by ten battalions (6,500 men) of Prussian infantry. The French defenders holding the houses and gardens numbered no more than 4,000 men, with a further 3,000 holding the road running north from the village.

Resistance was determined, particularly with the defenders lining the cemetery wall around the church, becoming the central strong-point of  resistance as both sides sought to gain control of it and the village.

Plancenoit today on a sunny afternoon is a sleepy place and gives no clues to the drama that was played out in and around the village square other than the plaques on the church wall and the little information board mounted in the centre of the grassy area.

The church is larger than it was in 1815 and the square wider with more buildings occupying the centre at the time of the battle, thus causing the fighting around the church to become a very up close and personal affair. Both sides deployed cannon as close as they dare, to sweep the streets with canister.

It wasn't until 20.00 that the Prussian troops under Pirch's II Corps moved in to support Bulow's men and the shattered and burning village was finally taken and cleared. The final casualty lists were horrendous for the forces involved with the 1st Tirailleurs of the Guard reporting one week after the battle only 92 men present out of 1,100, with the majority of their losses suffered in Plancenoit.

In total the estimated number of infantry casualties for the battle for Plancenoit number about 6,350 Prussian and 4,500 French. Plancenoit changed hands twice before finally falling to the Prussians forcing Napoleon to commit twenty-five of the thirty-six infantry battalions (Imperial Guard, 21 battalions & Lobau's, 15 battalions) that he held in reserve at the start of the battle. In the end he was reduced to only being able to commit eight fresh battalions in the final assault on Wellington's line by the Imperial Guard.

This was the major contribution to winning the battle of Waterloo made by the Prussian army and induced a fulsome recognition by the Duke of Wellington in his dispatches home. In addition the Prussians would complete the victory in providing the fresh forces to pursue Napoleon's broken army from the field late on the evening of the 18th June. 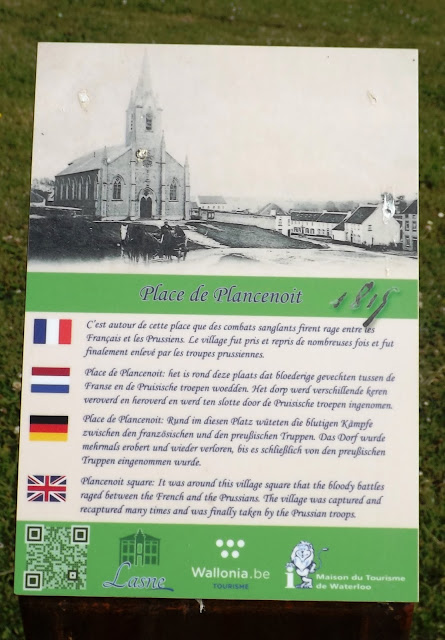 The memorial just on the western edge of the village leaves you in no doubt as to which army it commemorates with or without a Prussian Colour draped on the railings, Established in 1819, I expect many of the Prussian veterans from the battle would have been present at its unveiling.


A little further investigating behind the trees and hedges around the Prussian memorial reveals just how close the village is to Napoleon's rear area and the views gained towards Wellington's line revealed that proximity.

Thus ended our journey from Wavre to Plancenoit and our exploration of the wider aspects of the Waterloo campaign. In the next posts I aim to explore Waterloo itself and show the new facilities that have been created for the bicentenary along with the more familiar ones.